Born on May 28, 1936 in Brooklyn, New York, Ronald Vincent Coughlin (“Ron”), died peacefully at his home in Rowayton, Connecticut on October 28, 2022 surrounded by his family. 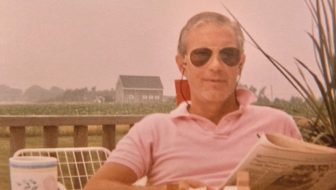 A devoted Brooklyn Dodgers fan, turned New York Mets enthusiast, Ron had a lifetime love and passion for New York baseball…New York National League baseball, that is. The New York baseball that happened across the East River and south into Brooklyn.  Ron’s father, Herbert Vincent Coughlin, played a significant role in creating and marketing the pre-game show Happy Felton’s “Knothole Gang”, which was broadcast live from Ebbets Field and encouraged young baseball players of Little League age to the ballpark, an inspiring mentality that Ron carried with him throughout his entire life as he mentored and coached his grandchildren right up until the very end of his life. Ron’s devoted mother, Beatrice (Lawler) Coughlin, proudly claimed that her one and only child was named for the debonair of the day, actor Ronald Colman.

In 1950, Ron’s family relocated to Freeport, Long Island where he played catcher on the varsity baseball team at Freeport High School, a position he shared with his great-grandfather and grandfather, and one that he passed down to both of his sons, two of his grandsons and one of his granddaughters. A proud New Yorker, Ron often told stories to his children and grandchildren recalling his fond memories of the summers he spent working at Jones Beach donning a crisp, white uniform and where attention to detail was paramount!

Ron graduated from Colgate University in 1958 and was a member of the Theta Chi fraternity and the Economics Club. He later received a Master’s Degree in Education. Ron’s love of history, trivia and learning lead to his runner-up “victory” in Jeopardy! in 1967.

One of his proudest accomplishments was his service as Lieutenant Junior Grade in the U.S. Navy. He served on the USS Skywatcher radar ship tracking low-flying aircraft. He completed multiple deployments between Florida and Cuba during the Bay of Pigs Invasion and Cuban missile crisis and told stories of stormy seas and heightened tensions on the air and sea during his service.

Following his service, Ron spent several decades in New York and Washington DC at the management consulting firm, Booz Allen & Hamilton retiring as a Partner in the New York office. Ron lived between Manhattan and Brooklyn Heights for over thirty years and had a deep love of New York City for all of his life.

Later in life, Ron moved to Connecticut, living in both New Canaan and Rowayton for many years. His love for animals was profound, and he was often seen driving around town in a Jeep with the head of one of his golden retrievers happily hanging out of the rear window. At night, he loved to sing Irish folk songs and even surprised his sons by singing along with the famous Annette Griffin at Ashford Castle in Galway on a trip through Ireland. A life highlight was the week he spent at Mets fantasy camp where he proudly caught every inning of the game at age 65 with the likes of Jerry Grote and Duffy Dyer. He was awarded Most Valuable Player and notably got into a tussle with an opposing player over a close play at home.

Most importantly, Ron was an endlessly loving and devoted father to his four children, and “PaPa” to his ten grandchildren. He spent countless hours cheering at his children’s and grandchildren’s various sporting events, including watching his daughter dance in over 50 performances of the Joffrey Ballet’s Nutcracker at New York City Center in one single Winter.

He is survived by the long-time love of his life, Linda Coughlin, who was by his side for his last seven years, together with his daughters Brooke Barquin and Emily Coughlin, and his sons Ronald Coughlin Jr. and John Coughlin and ten adoring grandchildren, Dylan, Van, Beatrice, Philip, Henry, Isabella, Lillian, Wilder, Nell and Amelia.

A service celebrating his life will take place at 10:30 am on Wednesday, November 9th at St. Mark’s Episcopal Church at 111 Oenoke Ridge Road in New Canaan, Connecticut.

In lieu of flowers, the family requests donations in Ron’s name to the Irish Arts Center in New York or to Memorial Sloan Kettering Cancer Center.