Toni Esposito had joined the staff Hairquarters West in 1992, when the longtime New Canaan business was located up the staircase alongside the former Post Office building on Pine Street. 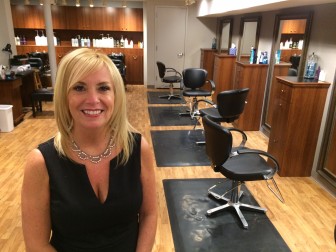 Ten years ago, Esposito opened her own place, Cherry Street Salon, which has been so successful that the 1986 Westhill High School graduate been looking for a bigger space to accommodate increased demand for hair and other services.

On Monday, Esposito will move her staff into the East Avenue commercial space that Hairquarters West has occupied for the past two years, since Mrs. Green’s took over the entire building at 2 Pine St.

The new salon, to be called ‘Salon 5 East’ (it’s at 5 East Ave.) will see Esposito’s 5-stylist staff move up the hill, and she’ll retain three stylists from Hairquarters West (yes, including Jose), which is closing, while expanding her offerings to include manicures, pedicures, waxing, facials and massages.

“My clients are so excited because now they can have a manicure, have a pedicure while they’re sitting with color,” Esposito said from the deceivingly expansive floor at 5 East Ave. “They are excited about the other services we will offer. They have been asking me for years, but I just didn’t have the room there [Cherry Street]. It’s very tiny inside. And we bring a very homey, cozy atmosphere, very comfortable and warm.” 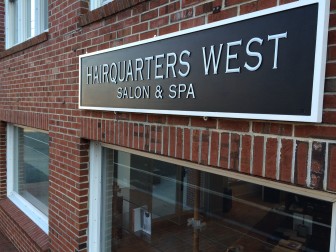 Hairquarters West in New Canaan is closing and a successful local business is taking over under the name ‘Salon 5 East’ is opening. Credit: Michael Dinan

Meanwhile, the recent owner of Hairquarters West could not be reached for comment. Opened some time in the mid-1970s if not earlier by popular founding owners Nick and Sally Venetucci, Hairquarters West had been sold a few years ago to an individual who is no longer in the picture, according to the East Avenue property’s landlord.

Esposito and Cherry Street Salon are longtime members of the New Canaan Chamber of Commerce. The chamber’s Laura Budd said the organization has “enjoyed working with Toni and her team in the past and we are not surprised they need room to expand their successful business.”

Esposito said clients of Hairquarters West are absolutely welcome at Salon 5 East, and that locals will start to see physical transformations in the space next week, with new paint and furniture, as well as signage outside.

“I’m a very family-oriented person, and my clients are like my extended family,” Esposito said.

One thought on “‘Salon 5 East’ To Replace Hairquarters West, Closed After 40-Plus Years”