As soon as we jumped into No Man’s Land, the German machine guns crackled out and a row of men went down like corn. As they went down, another row of men took their place. And on and on we went toward the German line, 750 yards away. —Patrick Smith’s personal papers, Jan. 21, 1921 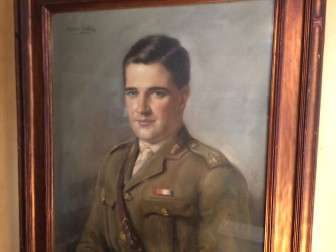 A portrait of Patrick Smith in his British Army uniform hangs in the family’s Whitney Avenue home.

Three decades earlier, the Scotland native had enlisted as a teenager with the British Army, and would attain the permanent rank of captain while serving on the front lines of France and Belgium during World War I.

Soon after the war, it seems, Smith would carry a live German-made grenade into his adopted country, the United States, where the explosive found its way into the family’s garage on Whitney Avenue in New Canaan.

This live German World War I-era grenade was found in September 2015 in the garage of a Whitney Avenue home. Photo courtesy of the New Canaan Police Department

The explosive, still live, was discovered on a recent afternoon by a niece of Smith’s New Canaanite wife (and defused by the Stamford Police Department’s bomb squad).

Asked about Smith, that niece—1964 New Canaan High School graduate Suzanne Waters—said on a recent afternoon from the living room of the family home that her uncle had been in World War I for all four-plus years (1914 to 1918), “so he had plenty of opportunity to find German hand grenades.” 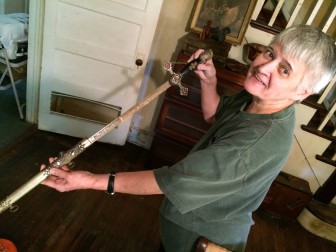 Suzanne Waters, a 1964 NCHS graduate, holds a sword that had belonged to her uncle Patrick Smith. She calls it his Knights Templar sword. Credit: Michael Dinan

“And the thing is, he was kind of a brilliant but … not always with the best sense. I can see him trying to sneak this back into the country, which in those days was not difficult.”

A brilliant man of humble beginnings who lived an extraordinary life.

News clippings, Smith’s personal papers and brochures that help to track his singular career path show that Smith was born Dec. 31, 1895 to a gypsy (in other words, traveling) family in Glasgow. He lived in a gypsy tent for the first 18 years of his life and took two degrees—in sociology and public speaking—from Glasgow and Edinburgh Universities, respectively, in 1912 and 1914. 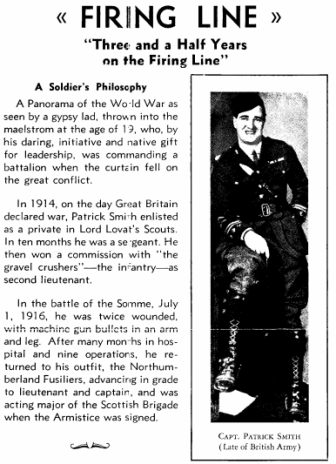 A poster promoting Patrick Smith’s lecture tours between the wars.

In the course of rising 10 ranks in the British Army during World War I, from private to captain, Smith would see some of its bloodiest combat, at Ypres and Mons in Belgium, and especially during the Battle of Somme in France during the second half of 1916—a conflict that saw more than 1 million men wounded or killed, historians say.

In personal papers that appear to be dated Jan. 21, 1921, Smith recounts a harrowing, and finally inspiring personal experience at Somme that may well have helped shape a propensity toward evangelism, one of his several professional vocations. 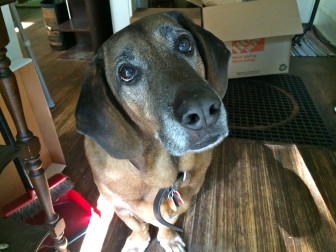 “The writer was knocked down in the German wire with a broken arm and leg and had to lie in a battle shell hole all day because the enemy shot off all our wounded men,” Smith recalls in his personal papers.

“Midday I heard a voice just behind me calling out and as I looked back, a young solider was lying about 25 yards nearer the German line than myself. He spoke down to me from where he lay on the slope of the hill and said he belonged to the West Yorks of the 8th Division.” 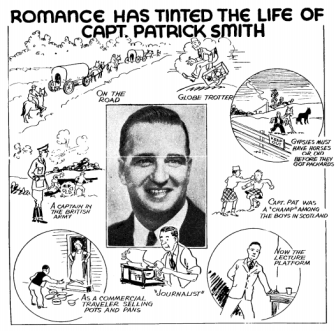 A cartoon celebrates the remarkable life of Patrick Smith, who settled in New Canaan.

That young man, whom he calls ‘Tommy’—slang for any soldier in the British Army—told Smith that he had gotten into the German line, came across an enemy dugout and flung a bomb in. But as he flung it, a German officer shot him in the chest with a revolver.

The fire was “so terrible from the German line that he [the boy] lay down and then he told me he was dying of thirst and asked if I could get a bottle of water to fling it to him. I too was dying of thirst, and yet with my broken leg and arm I would have tried to get him water but I dare not move. Later his moaning ceased, and my conscience began to accuse me for being a coward and not trying to save that poor Tommy’s life until I was almost lost in a fever thinking about it.” 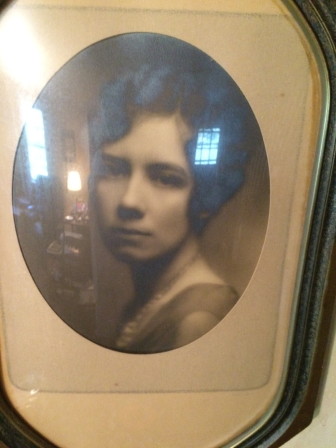 When darkness finally fell, Smith decided to try and crawl more than 700 yards back to the British Army trenches, he recalled.

“It was a long job dragging that broken arm and broken leg. I fainted times on the road and each time I came back to consciousness I thought of the dead man who asked for water. ‘Twas broad daylight by now and on and on through that weary trial, life is sweet, and at last at 8:30 a.m. the next morning I fell senseless into our trenches.”

What he experienced next was absolutely incredible—more on that below. 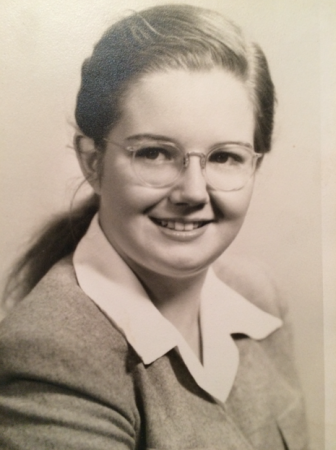 Patricia Smith in her youth.

Smith, a gifted linguist, appears to have learned French during the war and he would learn Japanese and Mandarin Chinese in the decades that followed. Immediately after the Armistice that formally ended World War I, records show, “Gypsy Capt. Pat Smith,” as he was known, helped raise more than $2 million himself for the “Victory Loan Drive.”

According to Waters, he emigrated to the United States in the 1920s and would marry Dorothy “Dot” Waters—a 1903-born woman of centuries-old New Canaan stock who worked for many years at Cherida’s Dress Shop downtown, according to her obituary, and who also served as regent of the Hannah Benedict Carter Chapter of the Daughters of the American Revolution, volunteered at the VNA Thrift Shop and was active in the Congregational Church.

Patrick Smith signs the Personnel Placement Questionnaire for the U.S. War Department on Sept. 11, 1942. Asked to “State any other information you may desire to submit which will be helpful in ascertaining your best field of usefulness,” Smith writes: “Know the Orient thoroughly and speak Japanese. Have closely studied and covered many Chinese-Jap fights, and have perfect knowledge of the Jap methods of attack, retreat and psychological idiosyncrasies.”

The couple had one child, the (naturally) rather remarkable Patricia Smith, a 1948 NCHS graduate who passed away in July (Suzanne Waters, her cousin, has come back up to town recently with Moe, her Bassett Hound-Rhodesian Ridgeback, to help with the estate).

Smith would find work as a journalist and lecturer throughout the United States and the world, most notably through the Far East—in fact, according to his application to serve with the U.S. Army during World War II, he was Far East Editor for the New York Daily Mirror newspaper. 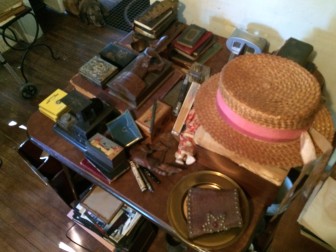 For 17 years, Smith said in his application, he shot 35-milimeter film while traveling through Japan, China, Philippines, Bali, Malaya, Manchuria and Australia. Professionally, he developed and delivered lectures during this period, delivering them to universities and clubs throughout the world. The nature of at least some of those lectures appears to be to warn people about what he perceived to be a danger emanating from the East.

As Smith states in his WWII application under a section asking for details about how his service may be useful: “Know the Orient thoroughly and speak Japanese. Have closely studied and covered many Chinese-Jap[anese] fights, and have perfect knowledge of the Jap[anese] methods of attack, retreat and psychological idiosyncrasies.” (Ultimately, Smith entered the U.S. Army as a sergeant during World War II, and was stationed in the United States, Waters said, though it isn’t clear just what his role was.) 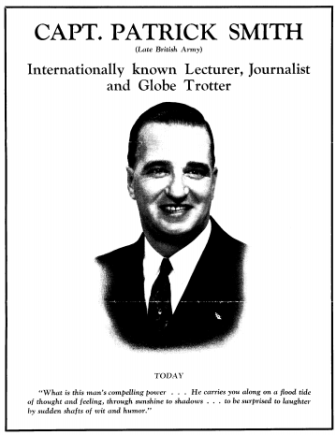 He also apparently was very good at public speaking, as one poster advertising his lectures spells out in large letters: “His Hold over an Audience Is Positively Uncanny.” A Denver News front page headline from April 8, 1935 reads “5,000 Hear Capt. Smith (deck: “Throng Jams Auditorium in Great Tribute”).

Because he traveled so extensively for many of the years between the wars, and because his daughter Patricia appears to have been reserved when it came to personal matters connected to her family, Smith in some ways remains a bit of a mystery.

A local woman who befriended Patricia Smith in her later years, Mel Neville, told NewCanaanite.com that although her friend spoke of the papers and many items she came across that her father sent or brought back from his travels, conversation rarely turned to Patrick Smith’s personality. 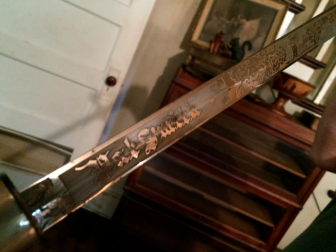 Patricia’s cousin, Suzanne Waters, said she personally did not know Smith, since he died in 1947, the year after she herself was born (he appears to have suffered a debilitating stroke or something similar toward the end of his life).

Suzanne described her cousin as a “very brilliant” and knowledgeable woman who helped restore Philipsburg Manor in Sleepy Hollow, and at one point showed First Lady Claudia Alta Taylor “Lady Bird” Johnson around that site, as well as restoring Sunnyside, Washington Irving’s house.

Beyond the grenade, much of Patrick Smith’s legacy is contained in the scores of items he sent or brought home from his travels, or collected through associations (such as his British Army uniform and helmet, or Knights Templar sword engraved with his name—he was a Mason).

The Denver News article from 1935 refers to Smith as a “new-style evangelist and World War hero” who led “the most significant and moving spiritual outpouring Denver has seen in the last 10 years.”

Waters recalled that her family described Smith as a man of deep and abiding faith—a quality of character that, beyond Smith’s era and upbringing, may have been reinforced by his war experiences.

According to Smith’s own papers, when on July 2, 1916, he was found after crawling with broken limbs back to British Army trenches, officials carried him to a dressing station with hundreds of others.

“As I lay in the yard, I heard a man groaning by my side, I turned my head on the stretcher—the only movement I could make—and saw Tommy lying beside me,” Smith writes.

Smith confirmed that the young man was the same who had asked him for a drink the day before.

Smith stayed with the boy to ensure that, as quickly as possible, the boy received medical attention. It amounted to a tube that ran down into his chest. Again the young man asked for water, and a doctor appeared and “began to wet the lips of the poor boy.” When the young soldier asked for a proper drink of the water, he was told that no, he was shot in the lung and on no account should he drink anything, because that would start internal bleeding and kill him.

Smith recalled that he “lay back in the stretcher and my mind ran back to the firing line.”

“And that if I had given him a water bottle, it would have killed him, and then I understood that all things worked together for good.”

Note: A reference to the Historical Society has been removed from this article.