Police say they called in a bomb squad last week after a Whitney Avenue resident cleaning out her garage came across a pair of World War II-era grenades. 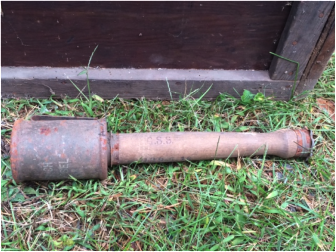 This live German World War II era grenade was found in September 2015 in the garage of a Whitney Avenue home. Photo courtesy of the New Canaan Police Department

Investigators determined that one of the grenades was German-made and live, according to New Canaan Police Chief Leon Krolikowski.

The live grenade “will be destroyed by the Stamford Police Department bomb squad,” Krolikowski told NewCanaanite.com.

At about 4:39 p.m. on Sept. 30, the bomb squad of the Stamford Police Department was called to 16 Whitney Ave. after New Canaan police officers dispatched to the home had determined that the first grenade post no threat, according to Lt. Jason Ferraro, NCPD’s public information officer.

That first grenade had been “hollowed out with no powder or ignition device,” he said.

“However, the [condition of the] second grenade could not be determined, so we contacted the Stamford Police Department who sent their bomb squad to evaluate second device, and it was determined that second device was not an immediate danger,” he said.

Stamford police took it for further inspection and testing, Ferraro said. Ultimately it was found to be live.

Both of the grenades were found to be from the era of World War II. The German one was originally thought to be of Russian origin.

Editor’s note – This article has been updated with new information received Monday afternoon.