In an unusual discussion last week, some members of New Canaan’s legislative body voiced concerns about the qualifications and partisanship of a prospective member of an appointed municipal body. 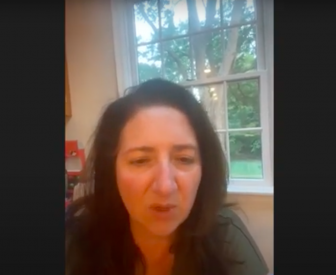 Maria Weingarten at the July 20, 2022 Town Council meeting, via Zoom.

While Maria Weingarten can be admired for her outspokenness and strong opinions, she as an alternate member of the Board of Finance has already had to recuse herself from some important votes related to a proposed affordable housing development at 751 Weed St. and is also an activist on some education-related issues, Town Councilman Hilary Ormond said during the legislative body’s regular meeting July 20.

It also is unclear just how Weingarten is qualified to serve as a regular member of the finance board, Ormond said during the meeting, held at Town Hall and via videoconference.

“I’m not entirely clear what her qualifications are,” Ormond said. “ I know she’s an incredibly talented chef. I know she was in real estate. Again, she worked for Mr. [Arnold] Karp. I know she ran Mr. [Kevin] Moynihan’s campaign for first selectman quite well. But again, we have a huge budget in this town. I’m not quite sure what her financial background is and what qualifies her to take this very important position.”

The discussion came as the Town Council took up a vote on whether to appoint Weingarten to the remainder of Neil Budnick’s term. A respected member of the finance board, Budnick stepped down as of July 1 after 15 years on the appointed body, his current term set to expire in November 2024.

Typically such appointments are made without concern and unanimously by the town—as were two appointments that the Town Council made on the same night—but not so with Weingarten.

The Board of Finance is one of the New Canaan government’s main funding bodies, along with the Board of Selectmen and Town Council. It is the second-to-last body to approve the annual budget, sets the mill rate and approves special appropriations and bond issuances, among other responsibilities. Yet unlike the selectmen and Town Council, the finance board is appointed, rather than elected. Appointments start at the Board of Selectmen, whose meeting agendas are set by the first selectman. Weingarten was appointed as an alternate in July 2018, during Moynihan’s first term. (She helped edit Moynihan’s endorsement letter for the Board of Ed race in last year’s election that was distributed by the RTC—the document at the center of a months-long ethics investigation. The Ethics Board in May issued a final “Report and Determination” in order to ensure that a similarly presented letter would be cited as an ethics violation in the future—the 15-page document can be read in full here).

“Perhaps most importantly, she has proven to be a highly partisan member of the RTC,” Ormond said during last week’s meeting, referring to the “Republican Town Committee,” a volunteer group. “And we’re being asked to approve for a very important and highly visible board that’s supposed to be impartial. And again, while I applaud her advocacy and her activism, I don’t think that it has any place here. And finally, and again I regret having to bring this up, but seeing her smear to parent volunteers from West Elementary during the campaign last summer—both of whom are friends, but it doesn’t matter—online and in public, for the purposes of an election, I just thought exercised incredibly poor judgment. And I don’t think that someone who would do that deserves a place on this board.”

Ultimately, the Town Council voted 6-3 in favor Weingarten’s appointment. Those voting in favor included Vice Chair Penny Young, Cristina A. Ross, Maria Naughton, Robin Bates Mason, Tom Butterworth and Chair Steve Karl. Those voting against were Ormond, Vice Chair Mark Grzymski and Rita Bettino. Kimberly Norton abstained from voting. Luke Kaufman was absent and Michael Mauro was on the meeting via Zoom but could not be reached during the vote, possibly due to a phone issue.

Butterworth said he’s “known Maria pretty well for quite a while and I would definitely confirm Hilary’s assertion that Maria is a passionate partisan.”

“And I’m just not sure that it’s a strike against her on serving on the Board of Finance” he said. “If I could see a tie there, I’d be concerned too, but I don’t see the tie between those two things.”

Naughton said she respected Weingarten’s “knowledge base, her background, her position,” adding that having strong opinions and sharing them on social media should not be a reason for someone to recuse themselves from related voting on related matters as a public official.

Ross called Weingarten “thoughtful” and said she has an undergraduate degree related to finance. That Weingarten recused herself in the Board of Finance’s role as Water Pollution Control Authority with respect to the affordable housing application (Weingarten has worked for Karp in the past) is a positive not a negative, Ross said.

Weingarten, a guest at the meeting via Zoom, said she served at one time as Saxe Middle School PTC president and has been involved with the district in the past.

“I always look at every decision as it needs to be made but you know, the unique situation with 751 Weed, it really made sense to recuse myself,” Weingarten said. “I don’t see there being any reason that I would not operate in a very bipartisan manner.”

Bettino said she shared Ormond’s concerns. Though people can have strong opinions, Bettino said, members of public bodies pride themselves on taking a bipartisan stance, regardless of party, and “I honestly don’t think Maria is capable of that.”

“I think she puts party first, before other things—that’s my experience,” Bettino continued. “And that, along with some of the other things, does concern me in general, because I don’t think that’s how we should be operating. And fact that this isn’t an elected position makes me more concerned.”

Butterworth said the town as a matter of precedent should make someone who serves as an alternate on a board or commission a regular member, so long as they perform consistently and without criticism.

Mauro asked during the discussion whether any other Board of Finance member had raised concerns about Weingarten in her role as an alternate and she said no.

Young said Weingarten “is extraordinarily committed to this town” and “spends a ‘gazilion’ hours” in volunteer roles, presumably a reference to the RTC and/or Board of Finance.

Karl said he preaches civility, saying that “we all have to remember, we’re all one town and we’re all working together” and that he himself errs on the side of support for those who raise their hands to volunteer.

Ormond said that Weingarten had to recuse herself on the affordable housing application “either because, I think she worked for Mr. Karp or because she’s been so vocal about the housing issues and affordable housing.” Ormond added that she respected Weingarten’s “efficacy.”

“I think we’re both activists and I don’t use that pejoratively, I’m very proud of that,” Ormond said. “But because of that she’s had to recuse herself on a really important issue that’s fomenting in our town. And so I think elevating her to a full-time position where she will have to recuse herself from issues that are percolating now causes me some concern.”

Ormond asked Weingarten to address her statements from last year with respect to the West School PTC presidents “that I believe are untrue.”

Weingarten said, “I don’t believe I besmirched. I think when talking about what happened during the election, one would think that as a PTC president that it might have made sense to not step into all that.”

Ormond said, “They didn’t, Maria. You brought them into it and a sitting Board of Ed member called them up and told them that they better think about what they’re doing.”

When some Council members protested saying that they didn’t have the Facebook posts that Ormond was referencing, Norton said, “I don’t think Hilary would make it up.”