Adam and Molly Fewster recently moved into an in-town home in New Canaan from Charlotte, N.C. with their human daughter and Charlie, a 7-year-old chocolate Labrador retriever. 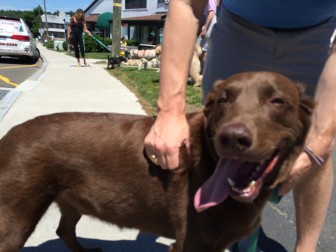 Out for a stroll on a picture-perfect Sunday afternoon, the family began seeing signs for the annual New Canaan Dog Days event and decided to check it out—they were glad they did, as it offered up a nice social space for the Lab to do what he likes best.

“He likes laying around in the backyard, sunbathing and playing with his little sister here, that’s about it,” Adam Fewster said as dozens of dogs and people milled about a cordoned off section of Cherry Street for the popular gathering of area canines. “He likes to chill out, lay on the couch and go for walks downtown.” 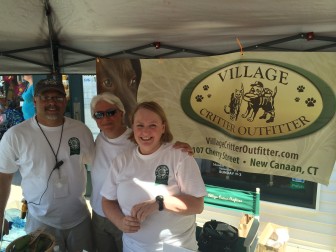 “It’s going fantastic,” Village Critter Outfitter owner Shirleen Dubuque said during a brief break in the day. “We got a great response and people are having a ball. We couldn’t be happier, and the vendors are feeling really glad that they’re here because they’re feeling a tremendous amount of support, and most of all the beneficiaries, PAWS and STARelief are delighted with all the money and donations coming their way, which is really why they’re here.”

Here’s a quick video at the event, including a look at the Tail-Wagging contest (won by ABC House resident Bailey). New Canaanites also will recognize Emi, a favorite Chow Chow from around town. Article continues below: 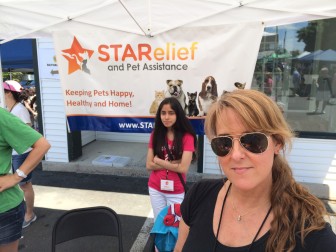 “A lot of people have come out and supported us,” she said. “All of our volunteers have shown up. We’ve met a lot of people who have never heard of us before, so it’s great that we were able to get our pet food pantry out there and all our programs, our Pets for Military Vets, our Aid-a-Grant program, which helps people provide veterinary care for people who cannot afford it. Our whole mission is to keep pets out of the shelter and in their homes.” 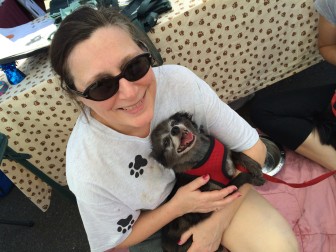 Cissy Tiernan is a volunteer at PAWS who runs that organization’s “PAWS Around the Neighborhood” program, pictured here with Calvin, an adoptable Pomeranian-Chihuahua mix (with his pal Gracie), about seven or eight years old. PAWS is a beneficiary of New Canaan Dog Days, presented by Village Critter Outfitter on Cherry Street, New Canaan’s owner-on-sit pet shop. Credit: Michael Dinan

Cissy Tiernan, a PAWS volunteer who runs that nonprofit organization’s Around the Neighborhood program, said the group (which has about 25 adoptable pets right now) has received plenty of great exposure through New Canaan Dog Days.

“As a fundraiser for us it’s really important because we don’t get any kind of funding,” Tiernan said. “And it’s nice to get dogs out of shelter and show them.”