Andrew Armstrong, an acclaimed concert pianist who graduated from New Canaan High School in 1992, was days into planning a new chamber concert series in his hometown last March when the COVID-19 pandemic hit. 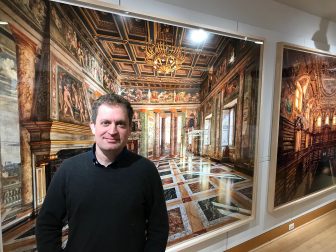 A Worcester, Mass. resident, Armstrong had gained confidence in directing the series after doing so successfully for two years in Columbia, S.C. He re-connected with friends and found a handful of locals willing to help get a New Canaan chamber music series off the ground—then in mid-March, schools went remote, theaters and parks were closed, restaurants were pick-up only and face masks were mandated anywhere outside the home.

“I felt a combination of, Well, was I this foolish or is it just bad luck?” Armstrong recalled. “And there were several months of real indecision on my part: Am I leaving people twisting in the wind who had expressed a real interest in doing something together, by not doing anything? And the answer was really clear, because this pandemic was an all-hands-on-deck crisis for us as local community, and national and global community, so it seemed right to lay low.”

During the past year, in addition to putting on virtual concerts in town, Armstrong and supporters here formed an organization—New Canaan Chamber Music—registered it as a 501c3 nonprofit, appointed a board and planned for a safe way to start realizing the in-person series as originally conceived.

“I’m so excited because I’ve spent the last few decades on the road playing concerts with chamber musicians that I have come to treasure, each for their own particular genius, as well as the warmth that comes with people sharing chamber music together,” Armstrong said.

“So the idea that now we are starting to be able to present more concerts in New Canaan—and I think we will be able to pick up the pace a bit and provide more opportunities for the community—I’m so excited about that. And excited about bringing together these cherished friends and colleges of mine dating back 20 years—and my hometown dating back to to 1980 when I was in the first grade here. Being that matchmaker. Even though I’ll be playing, I will feel like one part of my family is meeting another part of my family, and knowing they will hit it off.”

With a rain date of 4 p.m. on May 23, the concert will come days after planned major changes regarding COVID-related restrictions in Connecticut. Given that the state continues to see a low incidence of coronavirus disease and more people keep getting vaccinated, restrictions (including capacity limits) are to be lifted May 19 except in indoor public settings where social distancing is not possible, Gov. Ned Lamont has said.

Town resident Tom Butterworth, whose son Adam graduated NCHS ’92 with Armstrong and who serves as chair of the New Canaan Chamber Music board, said some people may still be anxious about gathering, though the space at the church is “safe and spacious.”

“There are always risks with being outdoors—the [sound] quality of the music is not as good outside, so there are compromises—but people want to see it and we want to do it, so we said, the hell with it, we’re going to go for it,” Butterworth said.

Armstrong credited another NCHS classmate, town resident Susan Gelvin, for “galvanizing” him and New Canaan Chamber Music last fall when it was still unclear just how the organization would move forward amid the pandemic.

“She said, ‘Andy, I know you are worried about coronavirus, and people have a lot of needs that kind of dwarf classic and chamber music, we have to stay healthy,’ but she said the truth is that everybody is dying to be together,” Armstrong recalled. Gelvin told him that even if a future outdoor concert needs to be masked and distanced in order to be safe and advisable, that “people will still get the feeling of the community being together and having a shared experience,” he said. Gelvin told him, “ ‘I think is what we are missing most, a shared experience.—people are stuck in Zoom settings and Netflix wormholes,’ ” Armstrong recalled.

“She was right, there was a real hunger,” he said.

The concerts themselves will feature shorter 4-, 8- and 12-minute “bites of composers and permutations of our instruments,” Armstrong said. The selections, and casual outdoor setting, both are designed to welcome all people to the concert, including parents with young kids, he said.

Asked about the long-term vision for New Canaan Chamber Music, Armstrong (its founding artistic director) said “Where we see ourselves very quickly getting to is four to five [concerts] a year depending on the appetite in the community and how quickly folks take to it.”

“Really making people who do not already know and love chamber music feel a sense trust that when it comes to concerts, although it is something new to them, that it’s also lovable and accessible to them, and turning it into something that is part of the fabric of New Canaan,” he said. “That is the mission long-term and the call to that is especially urgent today, when so much of our lives pulls us into devices and social media and streaming entertainment, and I think so much of the community and so many families are hungering for more real-world interactions.”

To purchase tickets, go to www.rebrand.ly/NCCMtickets.