On the evening of Nov. 7, 2014, Laura Valk took to Stage One of the Rockwood Music Hall, a venue located in Manhattan’s Lower East Side, to perform with her band Skout. And to perform music from her debut EP, set for a worldwide release the very next day, titled ‘Again Anew,’ to a live audience for the first time.

A musician typically would have days—if not weeks—to prepare with her bandmates for such a pivotal moment. Yet as a result of crazy, hectic schedules, Valk only got to rehearse with them the night before. 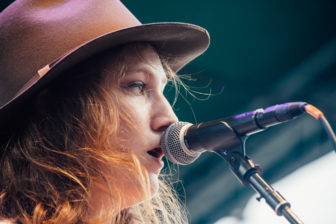 Laura Valk, a NCHS Class of 2009 graduate, is living out her music dreams as a member of the band Skout—whom she writes or co-writes all the music and lyrics for, in addition to being lead vocalist. Credit: Parallax Creative

So with just one night’s practice and the band playing on a corner stage so small that its drummer had to play off to the side, Valk walked up to the mic, looked out at the about 70 people who filled the intimate, standing-room-only venue to capacity, and played the first note of her musical career.

“I’d like to think that we’ve come a long way since then,” Valk told NewCanaanite.com on a recent afternoon when recalling the debut performance. “But that was definitely the origin of Skout and a fun way to start things off.”

After that night’s performance, Valk admits that the first feeling she had was “one of relief.” That’s understandable, given the obstacles she and the band had overcome to put the show together. But in the immediate hours and days that followed, that evening’s performance proved to be the flip of the switch Valk needed to make music turn from a fun hobby to a potential career.

“After that [debut show] I got real energized and motivated to start taking this more seriously,” Valk said. “Having a group of people come together to play these songs that I’d written, there was something really beautiful and energizing about that. Which, I think, pushed me to see this as a real art form that I could pursue. That night really enhanced my motivation and passion for all of it.”

Now, less than two years later, after a whirlwind summer tour that took her and the band from as far north as Boston to as far south as Nashville—with stops in Rhode Island, New York City and North Carolina, to name a few, in between—Skout’s next stop on Wednesday, Sept. 14, is the Ridgefield Playhouse. An opening performance for Eric Hutchinson, it’s the closest thing to a ‘hometown show’ the New Canaanite has had, and 14 months after playing the venue for the first time, she can’t wait to play it again. 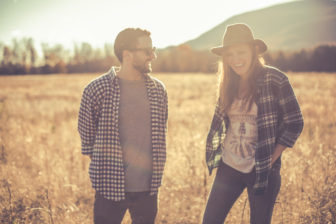 “It’s a great venue,” Valk said when asked about the Playhouse. “The sound there’s just so good—it’s definitely up there in our favorites to play. Connecticut’s where it all started and where the people who were there for me growing up and who have supported me from the start are—they’re the reason I’m able to do what I’m doing today. There’s nothing really like it. So in that sense it really does mean everything to be able to play there. It’s exactly like you’re playing at home—or home adjacent. There’s just a sense of comfort and belonging there that doesn’t really exist in many of the other cities and areas we’ve played.”

Growing up, playing her music at venues such as Rockwood and the Playhouse was barely even on Valk’s radar. That is until her grandfather, George McClellan, an opera singer, introduced her to the ability for one to channel their creativity through music.

So at the age of 14, Valk asked her mom and dad, Susan and Lindsay, if she could take guitar lessons. The parents supported their daughter’s curiosity and so Valk took lessons for the next four to five years. But with the lack of interest and passion in learning music theory, Valk knew that lessons would only take her so far.

Within the timeframe she was taking lessons, Valk played with a band both her junior and senior years of high school that featured friends and classmates Katie Vallely and Amanda Priest, as well as Dominic Miller—they only did two or three shows, though. Instead, most of the time they spent and played together was when they were hanging out in Valk’s basement, writing songs and dreaming about the possibility of playing “big shows.”

So dreaming was all Valk thought she would ever get to do when it came to her music.

Now, with at least 50 different venues under her belt, Valk said she can’t help but think back to when she was that teenage girl who thought this wasn’t possible.

“I think my 16-year-old self would just be ecstatic with what’s happening for me now,” Valk said with a smile. “I think something we all should do more often is take stock of where you are and how far you’ve come—I don’t do that enough.” 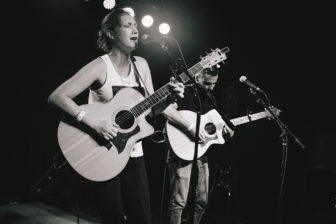 Valk performs in concert during the summer of 2016. Credit: Parallax Creative

Skout, in Valk’s words, are a band with a sound that’s “acoustic/indie/folk.” Valk’s musical inspirations are Ben Howard, an English singer/songwriter, and Fleetwood Mac—each of whom have a direct impact on Skout’s sound. But if that classification should not be of your taste or interests, Valk said not to worry.

“I actually like to think that our music has something for everyone. That it’s not necessarily bound to a specific genre. And I think, without patting myself on the back,” Valk said, “that it’s also just quality songwriting.”

The band’s name has a story behind it. While spelled differently, the name comes from the character of the same name, Scout Finch, from the timeless novel To Kill a Mockingbird by Harper Lee.

“I always felt a connection to her,” Valk commented. “She’s a rebel of sorts and doesn’t let societal norms sway her actions. I always admired that in her and liked the idea of incorporating that [type of] energy into my musical endeavors.”

Another big influence that’s driven Valk’s pursuit of a career in music, and a reason she loves it altogether, are words credited to Hans Christian Andersen: “When words fail, music speaks.”

Valk has used that as a mantra because of it “giving purpose to performing and writing,” she said.

Valk continued: “When you’re watching a performance or listening to a song you really connect with, they’re somehow able to emit these emotions that you can’t necessarily convey with only words. So there’s just something so beautiful about that connection you’re able to get strictly through music, and I feel is just impossible to do in any other form.”

While Skout performs in a variety of combinations, ranging from Valk on her own to a full (four member) band, when it does so as an acoustic duo (its most frequent version), Valk’s joined on-stage by her guitar counterpart and songwriting partner, Connor Gladney—someone Valk is certainly grateful to have with her in all of this. 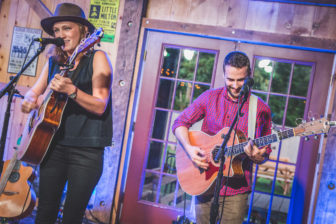 Valk doing what she loves, playing and performing music, with her band-mate Gladney. Credit: Parallax Creative

“Having Connor by my side is what keeps the creative energy and juices flowing. It makes the whole thing fun. I first met him right before that first show in [November] 2014, and we’ve been writing and performing together ever since.”

And Valk has Connor’s older sister, Kaitlin, to thank for introducing the two, while also thanking the elder Gladney for being her manager.

“Kaitlin’s insanely supportive and has been pretty instrumental in this entire experience coming together.”

But the ‘thank you’s’ do not end there.

“I would of course like to thank my family—my mom and dad as well as my [older] brother Chris. The most important thing I’ve gotten from them in regards to this journey is their undying support—and I’ve had that from the start. Having that’s certainly allowed me to do all that I have with music. I’d like to give another shout out to Katie [Vallely] and Amanda [Priest] going to back my days in our high school band together. That experience sparked it all for me. And over the last year, Eric Hutchinson has become a mentor to me. He’s been incredibly supportive and took a real chance on us by producing our most recent EP, Just Words. I don’t think we’d be nearly half as successful as we are now without his support.”

It is Hutchinson’s Anyone Who Knows Me tour that Skout is currently opening for. And when they take to the Ridgefield Playhouse stage on Wednesday evening at 8 p.m., Valk hopes to see there as many New Canaanites as possible.

“We always try to put on a really fun, energetic show. And Eric Hutchinson does an incredible job of doing that as well. I think New Canaan’s doing a better job now, but in the past it’s been kind of rare to see that many New Canaanites pursue a creative art professionally. So for those in town growing up with a creative mind and passion, it’s a chance to see someone who gets the opportunity to do that. It’ll be a fun night and an opportunity to see the hometown performer do her thing—so please come on out.”

Now how far this journey takes her and Skout beyond Wednesday night’s concert is unknown at the moment. In an effort to be pragmatic, with Connor Gladney finishing up college and Valk’s days being spent as part of the staff on NBC’s long-running sketch-comedy show Saturday Night Live, where she’s a production associate, it’s difficult to predict the road Skout has left to travel.

But Valk is certain that she and the band will keep the gig they have going for “as long and as far as we can.”

To learn more about Skout and their music please visit their website and their Facebook, iTunes, and Spotify pages.