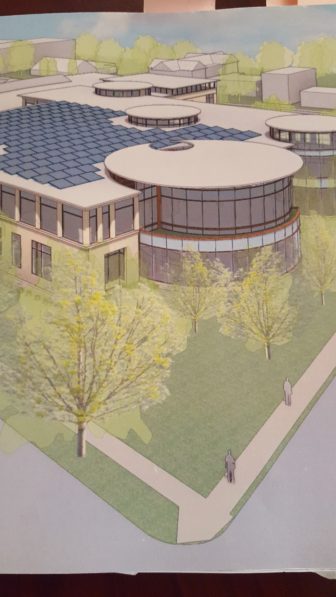 A vision for a future New Canaan Library. The corner at the bottom is at South Avenue and Maple Street, with South Avenue running to the left. Published with permission from the library

Approved 8-0 by the Board of Finance at the group’s regular meeting, the funds are designed to help the library acquire a key property on its block and trigger a widely anticipated capital campaign.

Purchasing the .19-acre property at 48 South Ave., currently the site of a rented multifamily dwelling, “is critical to any plans the library might have, because not only does it complete the campus footprint but setback rules would make other properties that they have acquired useless for construction purposes and limit their use for parking spaces,” finance board member Chris LeBris said during the meeting, held at Town Hall.

“So the entrance to town—instead of having a nice new library building—would be, essentially, several blocks of parking as you drive down South Avenue, so for the town aesthetics there is a reason to do this.”

The appropriation still requires the approval of the Town Council, which meets next week.

Conceived by town leaders after library officials said during budget discussions last fiscal year that they would go forward with their rebuilding plans even without it, the appropriation has received wide community support, finance board member said.

During the meeting, which was attended by a number of library Board of Trustees members as well as Director Lisa Oldham, the finance board asked whether there’s a timeframe for the library’s plans (five years to start a construction project, not to extend 10 years without town approval), whether to appropriate the money as a zero-interest forgivable note (it would come to the library as a grant with a memo of understanding attached), whether the $475,000 must be used for the property acquisition or could go into the library’s general fund (it will be paid at the closing of the real estate transaction), what is the purchase price ($1,4750,00 of which $1 million will be contributed by the library board on behalf of its generous donors and supporters) and what are the property taxes on the South Avenue parcel ($7,140).

First Selectman Rob Mallozzi, chairman of the Board of Finance as per the Town Charter, said the development came together because of a “great team” and specifically thanked BOF members Neil Budnick and LeBris, Kevin Moynihan and Bill Walbert of the Town Council, library board President Alicia Wyckoff and Treasurer Bob Butman, Oldham and Dawn Norton, New Canaan’s finance director.

“Lastly a big thanks to Dan Jones, a former library president who answered my call, came to the table to make this a reality,” Mallozzi said. “By making this investment in our library, we demonstrate most visibly the confidence we have in the library’s professional and volunteer leadership. It wasn’t too long ago that I personally had to break a tie in the budget process in regards to funding or not funding the library $20,000. That was only five years ago. Times have really changed and I can’t say how much we appreciate it. As we look forward to an expanded library footprint, we should also be just as excited about an expanded library mission. To me, a vibrant and vital library is a very good indication of a community’s vitality and we should relish this partnership.”

Budnick said he has been impressed by “the amount of support” for the heavily used library throughout the town.

“When you look at it, the opposition just isn’t out there,” he said. “It’s pretty exciting.”

He added: “The community is behind it.”

Library officials long have said that a new library is needed. Just two-thirds or so of the current, 37,000-square-foot building is usable, and the library has experienced chronic problems with its elevator, condenser and other infrastructure.

For more than two years, designs for a new building that will cost about $25 million have assumed the South Avenue property would be acquired. Officials have said a new facility will roughly double the amount of usable space at the library, feature modern architecture and preserve a traditional look for an area dedicated to events and meeting spaces.

Yet, though a capital campaign committee formed more than one year ago, renderings are needed to approach prospective donors and fundraise in earnest.

Noting that approval still is needed from the Town Council, Oldham during the meeting thanked the Board of Finance and said the board is very grateful for the town’s support.

“We are already back on track, meeting with architects and getting our capital campaign going,” she said. “We are ready to do this and I know that is what you all are really excited about.”