Though unable as yet to acquire a key .19-acre property on their block, New Canaan Library officials say they’re prepared to develop a new set of architectural plans for a widely anticipated rebuilding project. 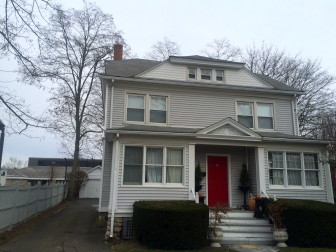 This home at 48 South Ave. occupies .19 acres mid-block, opposite the New Canaan Library. Unable to come to a purchase agreement with its owner as yet, library officials say they’re prepared to rebuild the facility around the house—even though that would be a less aesthetically appealing building for New Canaan. Credit: Michael Dinan

Regardless of whether they can buy a mid-block South Avenue home that’s bordered on three sides by library property, “We will be pushing forward on a capital campaign and starting to re-engage the architects by the end of this financial year,” Library Director Lisa Oldham told the Board of Selectmen last week.

“Our preference is to get that property for the sake of the town of New Canaan—the building that we already have designs for is beautiful, and it would be a real asset to the town,” Oldham said Friday during a presentation of the library’s proposed budget at a special selectmen meeting, held at Town Hall. “If we don’t get that piece of property, we cannot all be held waiting. We can build a very nice library without that property—it will be on the front axis of that property. It will be along the front. It can still be a very lovely building. The only real downside is that there will be parking lots on the corner of Maple and South, so it will be all parking lots along there. From an aesthetic point of view for the town, ‘Plan A’ is a more beautiful plan. Functionally, I have no doubt in the world that we can have just as an amazing asset and facility for the town if we have to go to ‘Plan B.’ We are going to work as hard as we can to get Plan A to happen, but we will not wait forever.”

The comments—made in response to Selectman Nick Williams’ request for an update on the library’s capital campaign—appear to refer to 48 South Ave., a multi-family home with rental units.

Neither Oldham nor library Board of Trustees President Alicia Wyckoff identified the specific street number on South Avenue during the meeting, or its owner, though number 48 is the only private house on the block. The owner of 48 South Ave. is a Naples, Fla. man, tax records show. It isn’t clear why talks with the library have stalled—he could not immediately be reached for comment.

What long has been clear to Oldham and others is that a new library is needed. Just two-thirds or so of the current, 37,000-square-foot building is usable, and the library has experienced chronic problems with its elevator, condenser and other infrastructure.

Acquiring the house at 48 South Ave. would give architects nearly the entire block on which to plan a new building, as they have (the Gulf station at South and Cherry is in place). But with the setback restrictions spelled out in New Canaan’s Zoning Regulations, no new construction can approach the property line with the awkwardly (for the library) placed house, leaving parking spaces as the only viable option for that area.

For about two years, designs for a new building that will cost about $25 million have assumed the property would be acquired. Officials have said the facility will roughly double the amount of usable space at the library, preserve the stone façade that faces Main Street in some fashion, feature modern architecture and preserve a traditional look for an area dedicated to events and meeting spaces.

Yet, though a capital campaign committee formed one year ago, renderings are needed to approach prospective donors and fundraise in earnest.

“We cannot wait any longer,” Wyckoff told the selectmen.

“I used to get the question, ‘Why do you need a new library?’ ” Wyckoff said. “And now we get, ‘When are you getting a new library? When is that going to happen?’ That is a big change.”

Saying that “things are going really, really well at the library,” Oldham said the facility is also seeing increased use and support from the community.

Door traffic is up by more than 100 people, to some 800-plus patrons in the door on a normal day, she said, and “fundraising is a huge indictor of how growth is going.”

“The ROI that we are getting on investing in fundraising is paying off in spades,” Oldham said, complimenting Director of Development Ellen Crovatto.

Specifically, the library’s fundraising events in the current fiscal year already have surpassed year-end targets by $20,000, and the popular annual “Books, Blues & Barbecue” fundraiser (typically late May) could bring in up to about $50,000 more, she said.

Wyckoff and First Selectman Rob Mallozzi both heaped praise on Oldham for running a lean and effective facility—the library is targeting a 2.4 percent overall increase in spending next fiscal year.

Mallozzi noted that the town has ear-marked $5 million in fiscal year 2018 (see page 5 here) as part of its 5-year capital plan to support the library rebuilding project, saying: “I don’t think you can invest in a better town-wide asset than your library.”

Oldham said a change whereby librarians came off of the municipality’s insurance—saving New Canaan some $77,000—did hurt some of her employees, though with support from the town’s human resources department and an advocate, the financial pain of that change was mitigated.

Oldham said her spending plan for next fiscal year “is the not the budget that gives us everything we would like to do.”

“This isn’t the budget that allows us to do and provide everything to the community that we would like to,” she said. “This is the budget, though, that can keep us on the right track.”