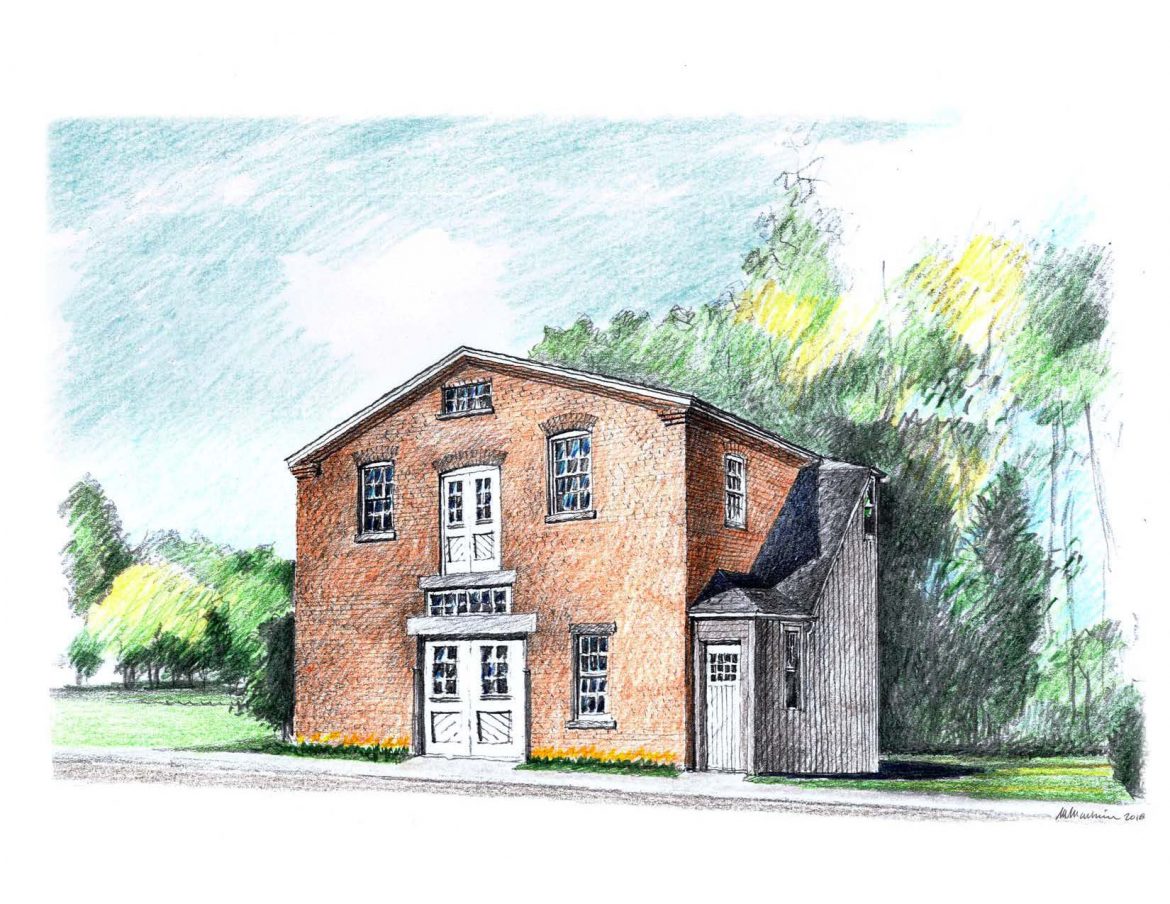 After 90 minutes of debate and public comment at a tense meeting Tuesday, town officials ultimately decided to forgo voting on whether to approve contracts to demolish the “Mead Park Brick Barn” and remove its would-be contaminant-laden debris.

By taking no action on a pair of proposed contracts—one for about $44,000 to raze what some call the “Richmond Hill Garage,” and another for about $9,000 to safely dispose of its remains—a divided Board of Selectmen effectively stalled the structure’s demolition.

After hearing from the public and echoing much of the same thinking they had voiced last month, the selectmen also opened up a new question about whether or not the Board is acting appropriately by forestalling a demolition already approved by other decision-making bodies in local government.

“My problem is I think it is a nullification of the bodies that voted on this,” First Selectman Kevin Moynihan said during the Board’s regular meeting at Town Hall.

Moynihan referred to the Town Council’s 6-6 vote in May—which he himself broke, as per the Town Charter—to include $65,00 to raze the Barn as part of a larger bonding package. After that, the town applied (to itself) to demolish the 1911-built structure on the northern edge of Mead Park, where Standard Oil’s horse-drawn delivery wagons used to fill containers for fuel delivery in New Canaan. A formal objection to its razing led to a 90-day demolition delay, which ended Tuesday, and the town had already solicited bids for the demo project.

Yet while all that was happening, a local preservationist group worked on a plan to restore the Barn and maintain it with a low-impact office use—an effort that Selectmen Kit Devereaux and Nick Williams both applauded and encouraged.

Moynihan has dismissed the New Canaan Preservation Alliance’s proposal as not credible, and reiterated his view during the meeting.

“Obviously there are two sides to this story,” he said. “I have heard the preservationists. My own view is this is the wrong building in the wrong place at the wrong time.”

The first selectman noted that the Barn had been slated for demolition many years ago following decisions by the town (in 2009 and 2010, but the estimated remediation costs due to contaminants soared to about $400,000).

Williams responded that “things change in terms of budgets.”

Referring to pointed comments made earlier in the meeting by town resident Laszlo Papp (see below), Williams added: “This whole idea of our oath, our duty—it’s pretty clear that the Board of Selectmen has the obligation, has the duty, has the right to vote on contracts, and we are talking about a contract that has come before us.”

Moynihan responded that “there is really a principle involved here.”

“This is a town property. I don’t think we can have a special interest groups tell the town what to do with buildings on town property.”

He added: “To some extent this particular building, to me, is preservation for the sake of preservation. There is no use that people have agreed upon as a worthwhile use. So I am very concerned. We really cannot nullify the actions of our funding bodies and our town approving bodies.”

Moynihan then proposed a motion that the Board take up the matter again in two weeks, saying, “We either have to table it or we have to vote.”

No one seconded his motion.

She added: “I am confused, because if we bring it back in two weeks, what is likely to be any different?”

When Moynihan said he was “very concerned about the nullification” and “wanted to do some further research,” Williams asked whether he had consulted New Canaan’s town attorney with respect that argument.

Moynihan said, “Not yet.”

At that point, the Board moved to the next item on its agenda—it had to do with granite curbing for sidewalks—and a mostly non-plussed audience of about 40 opponents and advocates for the Barn’s demolition moved quietly into the hallway.

Several of those guests at the meeting, including members of the NCPA, had addressed the Board.

Charlie Robinson, a member of the NCPA Board of Directors, asked the selectmen not only to not sign or approve a demolition contract, but also to withdraw the town’s permit for demolition and to empower the organization to restore the building.

Since presenting its plan for the “restoration and adaptive re-use” of the Barn last month, Robinson said, the NCPA has “raised more than half of its proposed equity” for a project that would take two years from start to finish. A restoration fund grant this month increased in its size from $50,000 to $100,000, allowing the NCPA to make $200,000 of improvements—60 percent of the total project costs, including a reserve to be made in the first year. The project would start with exterior and core shell restoration, he said. In terms of funding, Robinson said, “nothing has changed with regard to reliable state funding sources.” The NCPA will apply for a $175,000 grant and tax credits of $87,5000, and will use a revolving loan program for liquidity needs. Some bodies already have signaled that the project qualifies for state funds and programs, he said.

Moynihan asked about the NCPA’s proposed future use.

Robinson said: “The use will initially be office space for the NCPA and then secondarily will be sublet. At this time, we are targeting 501c3 nonprofit organizations. In all events, it will be low impact with great sensitivity to the neighborhood.”

Others in favor said it doesn’t make sense for the town to spend taxpayer money on an unneeded demolition, that there’s no reason to remove the building now, that its wartime history ties in nicely with the nearby Gold Star Walk, dedicated to the New Canaan men who served during World War II and that the town is in an era of public-private partnerships that should be embraced rather than dismissed.

Papp warned the selectmen not to be “fooled by the beautiful slogan of ‘historic preservation.’ ”

“This building does not rise to the level of architectural significance,” he said.

Papp said that preservationists in the eight years since New Canaan last decided to raze the building have done nothing.

“They delivered promises only,” he said.

Papp noted that he served on the Town Council with Bill Bach (of the “Bach Amendment”) and that the measure its deigned to ensure that if promises are not delivered, “the town is not holding the bag.”

Papp said that the selectmen have taken “an oath” to uphold the Town Code and not “overstep” it.

“You will have to keep in mind that a referendum is in the offing,” he said. “If the valuation puts the tax burden down on the low end of the population because the high end will have reduced their taxes, and then you will have to deal with that anger this will create when you approve the budget. Then you know that those who talk about a referendum are not just blowing hot air. So I warn you in your own best interests, stick to your oath and be mindful of the future, what this proposal will create for you and the town.”

Devereaux said she disagreed with Papp and that she’s heard from people on both sides of the issue “and they are very emotional about this building.”

“I have to say that I think that as beauty is in the eye of beholder, history may be in eye of beholder, too, and I do think there is history there,” she said. “The building has not cost the town a cent. I hear, ‘Why is the town concentrating on this building when we could be concentrating on the barn at Irwin? This is the Preservation Alliance project, not the town.’ I also think that once this building is gone, it is gone forever. And it may be that in the end the funds cannot be met to keep it, but I hope we can. And also that building was there before there was a Mead Park, and we should think about that. And also, beyond all else I have high regard for the New Canaan Preservation Alliance and if they feel they need a little bit more time, I am all in favor of giving it to them.”

Williams said he also favored “a stay of execution” for the Mead Park Brick Barn.

“This building has been there for 110 years,” he said. “I don’t think New Canaan is going to fall down if we give them another three months. That’s a pretty limited window and we have got a lot to do. Like Kit, I do believe in preservation. I am a history buff. I have learned more about this edifice than probably anybody else in town in terms of its history. it is interesting. It is not beautiful. But preservation is not just about preserving the stuff that is beautiful. It is about preserving history. And that is not just the rich people’s history with the ‘fancy schmancy’ homes—it is the stalls and the wood shops and the factories that people toiled in to make ends meet.”