Town officials have approved a $6,400 contract with a Cross Street company to install new, taller backstops designed to control flying foul balls at the main softball field in Waveny. 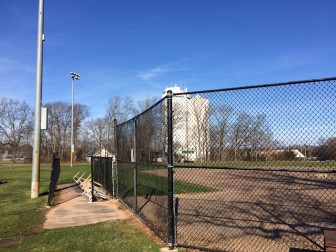 Known as the “Orchard Field”—on the right as you climb toward the crest of the hill on the main road, off of South Avenue (with the new ingress to the parking lot)—the softball diamond plays host to home varsity games as well as youth competition.

The 10-foot-high backstop now in place—first installed in 1988—isn’t high enough to contain the girls’ foul balls, according to Recreation Director Steve Benko.

“It’s good service to parents, the balls go over to where parents sitting and back to where their cars are parked,” Benko said at the meeting, held in a board room at Town Hall.

Selectman Beth Jones said it “sounds like a nice project.”

Selectman Nick Wiliams said: “This needs to be done.”

The town is hiring New Canaan’s Gannon Rustic Fence for the job.

Benko said a similar improvement was made some four years ago to Coppo Field at Waveny, back near Lapham Community Center. The new backstop at the Orchard Field is a project supported by representatives from the New Canaan High School team as well as New Canaan Softball, the youth program, Benko said.