Starting May 16, scores of New Canaan High School seniors have flooded local businesses and organizations in New Canaan and throughout Fairfield County to teach kindergarten, shuck oysters, plant onions and otherwise gain what for many has been first-time, first-hand real world work experience.

The Senior Internship Program is seeing 269 students participating this year—that’s 83 percent of the senior class and a 23 percent increase from 2016. 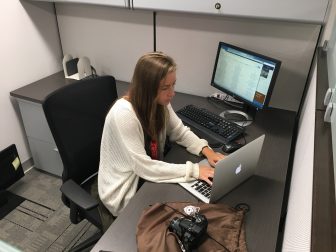 Holly Santero works on a document in her cubicle. Credit: Sam Stoner

The program offers a wide range of internships, from law offices and local government to nature and environmental science agencies.

“I think the [the program] not only provides a hands-on learning experience for students that they can’t get from school, but also helps them decide on their career path,” Bianco said.

NCHS senior Austin Leopold—an intern at Silver Hill Hospital—said that he has developed a new interests after the first few days at the Valley Road psychiatric hospital.

“So far, I have learned a lot,” Leopold said. “Originally, I have been wanting to major in finance my entire life, and through this I have been realizing that marketing and getting out in the community is a really cool idea.”

Before leaving the high school to work with local businesses, the SIP Committee interviews each student to try and match their interests with one of 191 sites. It also requires that students attend training sessions covering items from dress code to workplace etiquette. 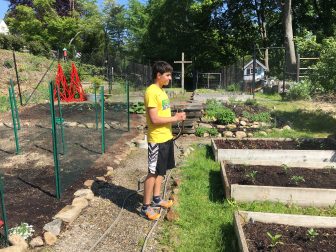 Alvaro Riquelme, who is interning at the St. Mark’s Episcopal Church “Gospel Garden,” said he thinks that the program did a great job placing him where they did.

“I think it’s going great,” Riquelme said. “All the people who come here love it because they like doing what they do. Everyone is always willing to do more stuff and make it better, so the environment is very active.”

Other interns said they’ve been surprised at what their experience has turned out to be in the early-going, but are nonetheless pleased with it.

NCHS Senior Brooke Holland said of her internship with Superintendent Dr. Bryan Luizzi: “It’s kind of different from what I thought it would be like. It is much more independent. I thought it would be more handheld but we’re given a job and you’ve got to get it done, and nobody really checks up on you. The ball is in your court to do what you have to do.” 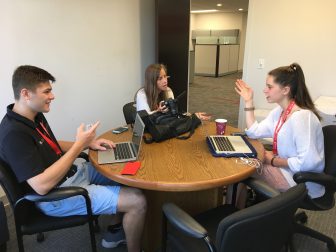 she has a lot more authority than she had expected.

“I have a lot of responsibility and flexibility,” she said. “Working with Mr. Horyczun, I’m able to help edit the NCPS homepage and even post some of my own stories and pictures.”

Tyler Sweeney, who works with Holland and in the same building as Santero, was similarly surprised by the way in which the interns are treated because they’re no longer students, but coworkers.

Sweeney said, “It was interesting the first day. We were told to call everybody by their first names so now you’re no longer calling anybody as if they’re above you. You treat them as your equal.”

While the program is designed to have students benefit by learning from local businesses, interns also bring a unique aspect to some workplaces that sometimes is not there, representatives from host sites say. 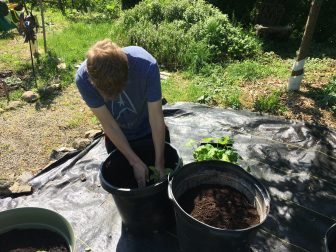 Brian Sandor picks up a plant to place it in a new pot. Credit: Sam Stoner

Ellen Brezovsky, director of community relations at Silver Hill Hospital, said that her intern, Leopold, is an important asset due to his ability to bring a youth’s perspective to meetings and discussions involving mental health and addiction.

“Austin accompanies me to all the community meetings I go to, and he really is important because he is helping give the youth voice to some of these things that we’re planning,” she said.

Ginger Craft, owner of Cherry Street consignment shop Severed Ties, said that her intern, Olivia Barden, is very helpful due to her ability to help with technological projects such as running the Instagram and Facebook pages.

“Her technology skills far excel ours,” Craft said. “We adore our intern, we are learning from her.”

While the SIP only lasts until the end of the school year, site supervisors often ask their interns to stay with them throughout the summer.

The manager of Severed Ties, Olga Mistry, said of Barden, “Anything that I ask her, she basically does. She just came in and wasn’t scared of anything. She perfectly fits right in. I could offer her a job for the Summer if she needs one.”

While internships are a good way to finish the school year for the majority of the senior class, the interns are still hard at work helping to run local businesses. 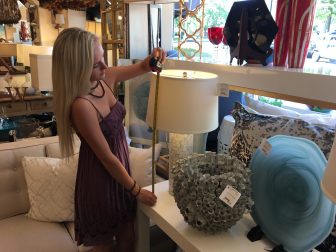 Nicole Howard Krog, interning at New Canaan Olive Oil, said: “It’s pretty fun. I don’t think I have a single minute to rest, I am always doing something.”

Barden also has a lot to do and feels like “another employee there.”

She added: “I go around taking the dimensions of all the furniture. I can ring up customers, I do a lot of organizing, I rework some of the windows. I am enjoying myself. It’s fun.”

New Canaan Olive Oil Owner Heidi Burrows said that she sees that the interns are enjoying their time and are willing to put in the time and effort to get the most out of their experience.

“I have found both interns willing to take on any task, they show an interest in the business and the projects that they are assigned,” Burrows said.

2 thoughts on “‘The Ball Is in Your Court’: New Canaan High School Seniors Begin Internships”