The Silk Purse, a New Canaan-based household furnishings and accessories consignment shop for more than 40 years, will soon close its doors.

A fixture of downtown New Canaan since its founding in 1973, the store at 118 Main St. likely will be open through September, according to a worker there.

It isn’t clear just why The Silk Purse is closing. Its owner could not immediately be reached for comment. 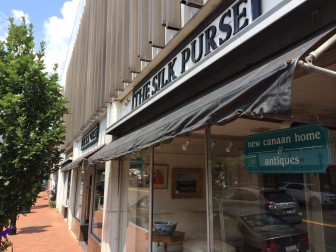 The Silk Purse at 118 Main St. will close in September, officials say, after 41 years in New Canaan. Credit: Michael Dinan

Told of the news, New Canaan Chamber of Commerce Marketing Associate Laura Budd said the organization was “sorry to see such a well-established member of the community close their doors.”

“We wish them future success,” Budd said. “We know what a popular destination New Canaan is for all different types of businesses and look forward to seeing who will fill the space.”

The property is owned by JR Silverberg Realty LLC, tax records show. Tax records show that the building has about 6,200 square feet on the first floor, where The Silk Purse occupies a space wide enough for two sets of doors on Main. A sign in the window instructs prospective tenants to contact William Raveis Real Estate. It isn’t clear whether the landlord is looking for a particular type of business there—the Realtor overseeing the rental could not immediately be reached for comment.

While it isn’t unusual to see shops in downtown New Canaan open and close, The Silk Purse will be the second multi-decade store on Main Street to close this year: Varnum’s Pharmacy, long located at number 91, this summer moved down the hill and reinvented itself as New Canaan Pharmacy. (The landlord there says she isn’t sure what will come into the space, though a restaurant has been ruled out.)

Other parts of Main Street have seen changes in 2014. Town Hall is being renovated and is on track to reopen in the spring, Kids Home Furnishings (long known as Sol’s in Stamford) opened this spring a few doors down from The Silk Purse and Barolo Restaurant opposite Morse Court opened in February.