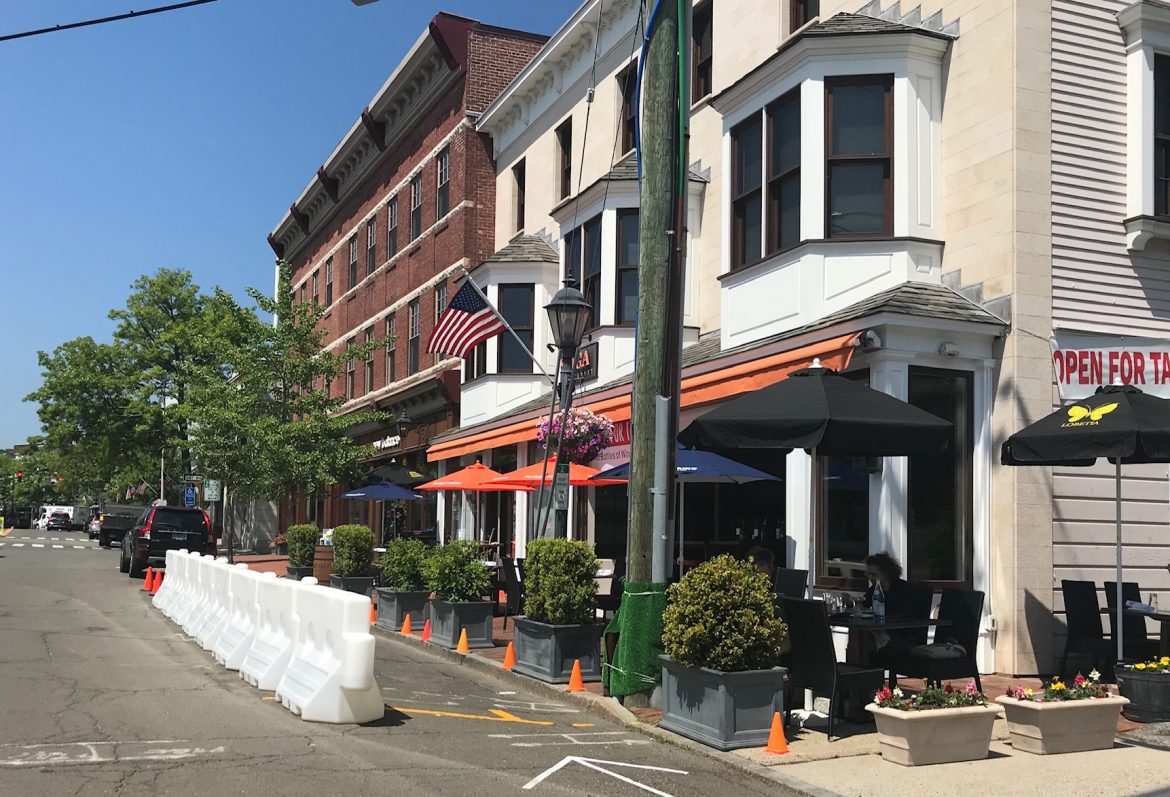 The barriers outside Spiga on Main Street on May 26, 2020. State officials did not approve their use. Credit: Michael Dinan 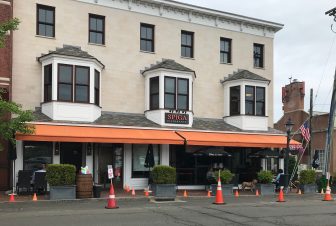 The set-up outside Spiga restaurant on Main Street on June 2, 2020. Credit: Michael Dinan

Designed to create a safe pedestrian walkway where about three parallel parking spots had been, while allowing an Italian restaurant to expand its outdoor dining area under a plan the town adopted two weeks ago, the barriers have been removed by order of the Connecticut Department of Transportation, according to Moynihan.

Main Street doubles in the heart of downtown New Canaan as state Routes 106 and 124 and the DOT “didn’t like our plastic barriers,” he said during a regular meeting of the Board of Selectmen, held via videoconference.

“In their wisdom, they objected to our plastic barriers and made us remove them,” Moynihan said. “So in this instance, the state government proved themselves to be totally inflexible and despite the efforts by our [General] Assembly people, the DOT operates by their own drummer.”

Asked by Selectman Nick Williams what the state’s reasoning was, Moynihan said, “They only allow concrete barriers on state roads, even though [Public Works Director] Tiger [Mann] tried to prove to them that plastic barriers when filled with water have been tested for safety.”

The Police Commission two weeks ago approved a plan, developed by citizen volunteers, to use the barriers to create “bump-outs” at four locations downtown— on Elm, Forest and Main Streets. Only the Main Street location comes within the state Department of Transportation’s jurisdiction. Restaurants as of May 20 were allowed to offer socially distanced outdoor dining, as per an order from Gov. Ned Lamont, in addition to pickup and delivery.

Asked about the matter, Kevin Nursick of the state agency’s Office of Communications said, “With the initial configuration of the barriers, the DOT had safety concerns for both diners and motorists. And also concerns about ADA compliance for pedestrians. We worked very closely with the restaurant owners to facilitate them getting a proper permit for outdoor dining in the state right-of-way, and ultimately they have been issued the permit to operate outdoor dining in that location. No additional conversations took place regarding the barriers because the town removed them and came up with another plan not utilizing them.”

It isn’t clear whether the citizen volunteers or town officials who approved their proposal consulted with the state about the plan for Main Street.

Asked about the barriers at the meeting, Mann said they have been “crash-tested at a higher rate of speed” than the 25 mph speed limit.

“They are approved by the Federal Highway Administration,” Mann said. “They are used in other states throughout the nation. Just they are not an approved material in Connecticut.”

Moynihan said that DOT officials “don’t care who bashes them.”

“They don’t care about anybody’s rationale,” he said. “So we will make do with an alternative plan.”

Moynihan added that he hoped some percentage of indoor dining would be allowed June 20 and that New Canaan in the meantime “might try to be more aggressive on giving the Forest Street restaurants more outdoor space.”

Echoing an idea that had been brought forward by Farmer’s Table chef-owner Robert Ubaldo, Moynihan said, “If we just use the sidewalk on the eastern side only for pedestrian traffic, if that’s possible.”

He added, “But I think the launch of the reopening downtown by the merchants and restaurants has gone very well. You almost feel back to normal but we are not back to normal. We’ve got a new normal.”