Saying a next-door neighbor’s backyard is overly exposed to people visiting the hugely popular, multi-use 80-acre Grace Farms property and buildings, officials on Monday night urged the two parties to work through their differences and try to reach a mutually acceptable screening plan. 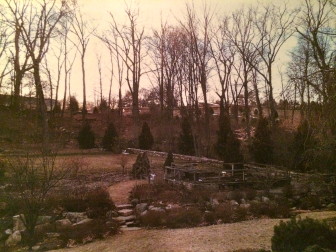 A view of the Grace Farms property from the backyard at 1218 Smith Ridge Road. Contributed

The 2-story Colonial at 1218 Smith Ridge Road sits on 4.14 acres adjacent to and downgrade from the southeast corner of Grace Farms, which opened to the public in the fall.

New Canaanites “are all beneficiaries” of Grace Farms, Zoning Board of Appeals Chairman Carroll Yanicelli said at the group’s regular monthly meeting, held at Town Hall.

“I love it. I love going there. It is a freeing experience. But being in the backyard of the neighbors today was a real shock, because it is so visible and if that were my backyard, I am not sure I would feel that way. Because they don’t look at the beauty of it. They look at the parking lot and the people walking by. And I feel like something can be done to [make it] better for both sides.”

Within the required 15 days after a Certificate of Occupancy was issued for Grace Farms last fall, the neighbors filed an appeal to the CO that centered on one condition tied to a zoning permit for Grace Farms’ sanctuary building, issued three years ago. That condition called for the two sides to reach an agreement on landscaping between the properties, and said that if they could not do so, the town’s zoning inspector should step in and “make a final determination prior to the issuance of the zoning permit” so he could determine whether more landscaping was needed.

Town Planner Steve Kleppin told the ZBA that, based on multiple emails from and between both sides, he understood that they had reached a mutual understanding, so that his involvement was not needed. Hammer supported Kleppin’s read.

Yet ZBA member Ben Bilus said it was possible for all the same facts to come to the group and for the zoning board to “reach a different conclusion from [Kleppin] without ever saying yours was wrong.”

“You did what you believe was in your best judgment,” Bilus said. “And this board could decide to do something else. When it comes time to deliberate, I think we have to look very closely at whether there was really an agreement between the parties that precluded you from exercising your judgment as to what was or was not adequate screening. And that is where we could act independently of your having found this set of facts amounted to an agreement between the parties.”

According to Zabetakis, the relationship between the Grace property—a special permit was approved in 2007 to operate a church in the residential zone, with an amendment to that permit approved for the River Building six years later—and its neighbors, has been contentious at times. During multiple hearings as use of the Grace property expanded, neighbors raised concerns about traffic, the environment and screening, she said.

The upshot for Bissonnette and Curt now is that Grace Farms has become a major draw every day of the week—averaging some 400 total visitors per day— and that “these visitors are able to clearly see into the Curts’ yard.”

“It is completely open to them. As bad as it was during construction, at least there was an end. But with the way the screening has been placed and these teeny, sparsely placed trees, they still cannot use their backyard. They don’t feel comfortable grilling outside. They don’t feel comfortable using their hot tub, their pool. They can’t get the enjoyment out of their property, and the value of their property has without a doubt been diminished by this large structure and being constantly on view.”

Curt himself reviewed his experience with Grace, saying he tried hard to climb a steep learning curve as public hearings and approvals came before municipal bodies such as the Inland Wetlands (there’s a pond on the Bissonnette-Curt property) and Planning & Zoning Commissions. Curt said he believed that he was negotiating in good faith with representatives from Grace, though in hindsight he has come to feel that his own legal counsel at the time—counsel from which he since has separated—failed him.

Now it feels as though he and his wife are “living in a fishbowl,” Curt said, because “what they [Grace Farms] have done to date is just not adequate, honestly.”

He added that a “narrow, legalistic” read on the appeal that he and his wife are making would be out of line with what P&Z intended when it included a condition that specifically addressed the screening. He also said it’s unduly burdensome to expect individual concerned neighbors to keep up with an array of public hearings, applications and associated deadlines.

“I do think it’s a real question of how much of a burden is reasonable to impose on neighbors when adjacent properties are doing things that are extraordinary,” he said. “Even if you take the commission’s stated condition that says we have to come to an agreement with our neighbor or an arrangement will be imposed upon us. That’s like saying David has to fight with Goliath and we’ll declare the winner if you can’t come to an agreement. Grace has been represented by high-priced lawyers, high-priced consultants throughout this entire process. I have now paid tens of thousands of dollars in legal fees and consultants to try to get just our lives back. This is entirely unfair, what they have put us through, and all we are asking for is some screening.”

His comments appeared to resonate with members of the ZBA. Bilus in addressing Hammer said: “It just doesn’t feel right to me that somehow there ought not to be a consideration given to what they have been trying to get Grace Farms to do for a long time. And it is something that moves me when I hear somebody say that they have been working with you for several years—and you seem to be honestly trying to accommodate them—but yet when we all go out there to look, we all have the instantaneous reaction” that the screening now in place is not sincere.

Ultimately, the board voted 5-0 to continue the matter for another month, and urged the parties to meet and try to work out their differences—even if their meeting required town attorney Ira Bloom as an intermediary.

Kleppin also said he would help facilitate at a meeting between Grace Farms and the neighbors.

Hammer said that Grace Farms has spent “considerable effort going above and beyond the letter of the approvals” and noted that some of the screening now in place needs time to mature in order to serve its purpose fully.

He also questioned whether the ZBA as a practical matter is in a position to honor an appeal that’s tied to a zoning permit issued years earlier.

“With all due respect to everyone here, including the appellants and the arguments they have made, I submit to you that this board does not have the authority to now transform that condition into a condition of the CO years after the zoning permit,” Hammer said.

Saying he was “not optimistic that it would be fruitful” to meet again with the neighbors, Hammer alluded to (but did not specify) ongoing disagreements “not germane” to the landscaping matter specifically before the ZBA.

“We may be facing actions and claims unrelated to this,” he said.

The zoning board’s next meeting is scheduled for April 4.