Parks officials are ramping up their efforts to rein in the currently unregulated use of drones at Waveny, and may piggyback on an established and vigilant group of aircraft operators there to do so. 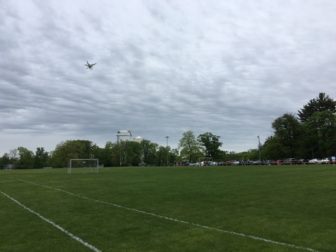 A drone hovers above the soccer fields at Waveny during the May 22, 2016 Caffeine & Carburetors. Credit: Michael Dinan

The prevalence and apparent misuse of drones at the park are posing immediate threats, according to members of the Park & Recreation Commission.

Commissioner Matt Konspore said he was at Waveny Pool on Sunday “and it was drone central.”

“They were flying low over the pool,” Konspore said at the group’s regular monthly meeting, held in Lapham Community Center. “It was crazy.”

And police have no real way to address that craziness without conspicuous signage at Waveny instructing drone operators to fly only at specific times and in designated areas, according to Commissioner Kit Devereaux.

The group decided to approach the New Canaan Radio Control Society about folding drone operators under its organization. The society has extensive rules that its own members enforce (such as banning flyovers of Waveny Pool or sports fields), requires a fee and probationary period for those who join, and carries a per-incident insurance policy of $5 million, Devereaux said.

Early discussions with the society indicate that the established group would relegate drones to an area at Waveny known as ‘alternate field B,’ Devereaux said.

She recommended that the town “freshen up” its agreement with the society to include drones and also place a notice in the Recreation Department office and town website that says drone users must have a permit to operate the devices at Waveny.

Though commissioners did not agree on exactly how much new signage should be installed in Waveny, just what it should say or where it should go, they agreed that swift action is required.

“We need to recognize that drones are going to be a big issue in the park and we need to somehow get control of it sooner than later,” Park & Rec Chairman Sally Campbell said.

She added: “I think this is a significant issue for park usage.”

There appears to be no roadmap in nearby towns regarding drone regulation. Devereaux said her search for what neighboring communities are doing has yielded nothing yet.

“ This guy was flying his plane at 12 noon and the pool was open and this plane crashed into the kiddie pool, missing people, so they [the society] were suspended for flying for like six weeks,” Benko recalled. “We sat down and drew up a policy so that they knew when the pool was open, they cannot fly in the field anymore.”

Most of those who break the rules of Waveny are nonresidents, he said.

3 thoughts on “‘This Is a Significant Issue’: Parks Officials Pursue Signage, Regulations at Waveny To Control Drone Use”