Though the state has yet to issue a formal decision on the matter, town officials on Thursday said they’ve been advised that subcommittee meetings held out of the public eye this summer were illegal. 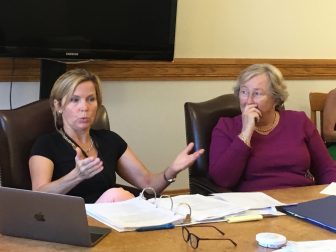 The Town Building Evaluation & Use Committee is charged with studying the uses, physical condition and capital needs of some 44 town-owned structures in New Canaan, excluding school buildings. Appointed in February, the seven-member committee is expected this fall to produce a report with wide consequences for the town, shaping the future of buildings such as the former Outback Teen Center, Waveny House, Playhouse and Vine Cottage by offering options that may include using them in new ways or even selling or razing them.

Though the committee has not met as a whole group since June 28, its members continued their work through the summer—specifically, conducting site visits to public buildings in smaller “teams” to meet with municipal officials and gather information for the final report.

None of those meetings were noticed as such and so they were not open to the public.

During a special meeting at Town Hall, committee co-chair Penny Young said she and her fellow co-chair, Amy Murphy Carroll, “have been notified that one of our procedures is incorrect.”

“I have worked for the town for 20 years and it is absolutely new news to me,” Young said.

The comments come on the heels of a complaint that NewCanaanite.com filed with the Connecticut Freedom of Information Commission on learning of the summer meetings. State officials say that the agency’s legal team will review and adjudicate the matter.

It isn’t clear how many meetings committee members had, what was discussed, what sorts of questions were put to the department heads who occupy the public buildings, what the municipal officials who maintain them said or any other information that could help the public follow the committee’s thought process in its consequential work.

In nine public meetings held from February to June, members of the committee voiced questions about how New Canaan Nature Center buildings are used, what may be done with the Richmond Hill Road garage and what new opportunities Waveny House presents.

Young said the committee now is working toward a final report that could materialize mid-October.

According to Young’s interpretation of the FOI law, the “teams” dispatched to public buildings qualified as subcommittees because of the number of members that formed them.

“Because you are you are designated as a pair, that makes you a subcommittee of a committee, and therefore your meetings were supposed to have been noticed,” she said.

Starting immediately, Young said, committee members would get around the requirement by conducting the site visits individually.

“Going forward, as you are doing your research you will be doing it without the benefit of another set of eyes and ears on it,” she said.

Asked during an interview after the meeting why the committee wouldn’t continue working in pairs but with legally required public notice, Young said that would present practical problems in scheduling.

The committee divided up the work of gathering information about individual buildings in New Canaan among its members, designating the fact-finding “teams” early on.

At the meeting, Carroll said: “So in terms of how we initially set up teams, just divide up and decide who is going to take what in the lead for these buildings.”

She added: “We were just trying to get two sets of eyes on it that was the only objective.”

Members of the committee referred to the subcommittee designation as “a technicality” and asked whether the original two-person teams would be able to “shift back and forth.”

Young answered: “As long as [just] one person is doing it.”

A guest at the meeting, Betty Lovastik, asked whether it would be possible to have a subcommittee member and someone from the public at the site visits.

“Is that still considered something that you would have to notice?” she asked.

Young answered: “If it is one person meeting with someone, that is not a meeting, so it would not have to be noticed.”

The committee’s members—in addition to the co-chairs, Christa Kenin, Neil Budnick, Bill Holmes, Ben Bilus and Martin Skrelunas—are volunteers. The town periodically hosts FOI training for those who take such positions, and materials on FOI compliance also are supplied to those appointed to town boards, commissions and committees at the time they start, according to officials in the first selectman’s office.