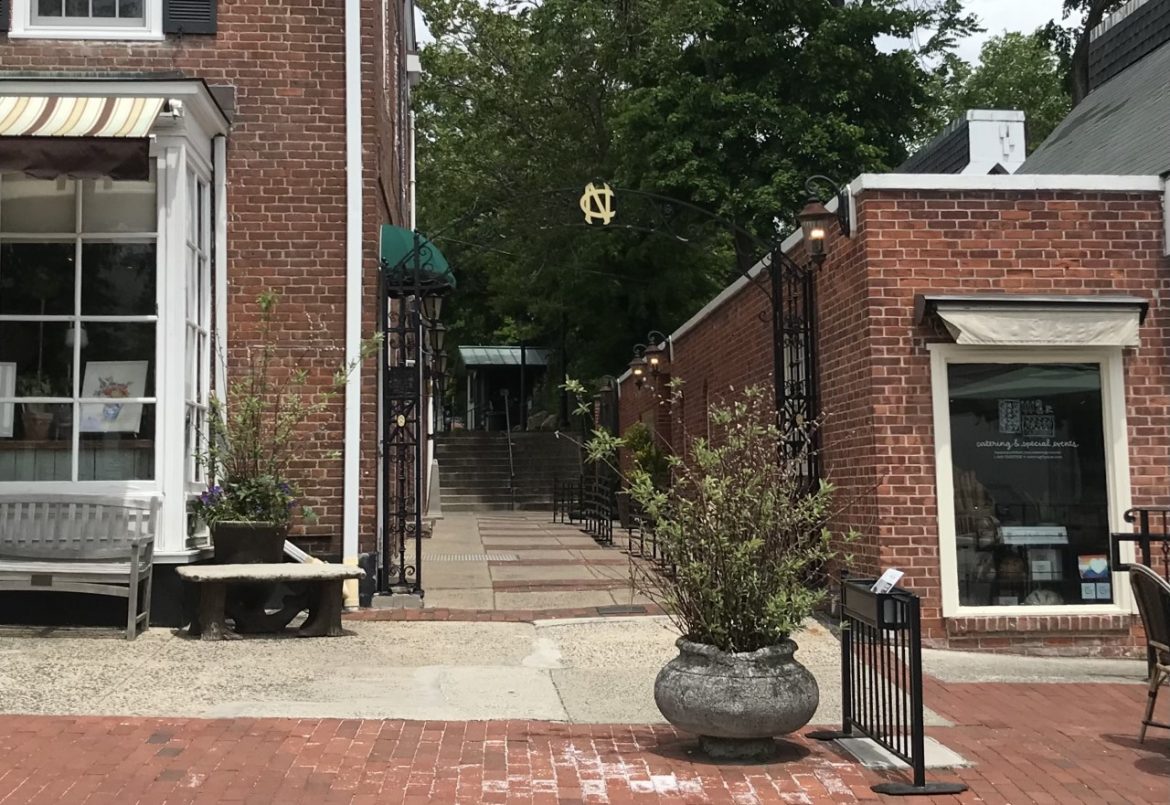 The staircase to the Playhouse Lot is located at the far end of an alley that runs between the movie theater and LPQ on Elm Street. Credit: Michael Dinan

Town officials last week approved an approximately $34,000 contract with a local architecture firm to draw up accessibility improvements to and around the movie theater on Elm Street.

The Board of Selectmen voted 3-0 during its June 7 meeting to approve the $33,925 contract with Architectural Preservation Studio, DPC, which has offices in New Canaan and New York City.

Part of the work will involve designing a three-set switchback ramp to be installed on the Playhouse side of the staircase that runs at the far end of the alley between the movie theater and Le Pan Quotidien, according to Bill Oestmann, superintendent of buildings with the New Canaan Department of Public Works.

The ADA-compliant ramp would address a change in grade of about five or six feet between the alley and the parking lot behind it, providing access to that lot for the disabled, Oestmann told the selectmen.

“It is pretty steep,” Oestmann said at the meeting, held in Town Hall and via videoconference.

“It’s going to be a switchback, most likely, so we are going to come up with a few ideas hopefully to how we can achieve that and make it aesthetically nice too,” he said. “And then also in the front of the Playhouse, on the sidewalks the elevations are a little different going into the doors there, so we have to go around the building to make it one grade.”

First Selectman Kevin Moynihan and Selectmen Kathleen Corbet and Nick Williams voted in favor of the contract. Money for the design work will come out of funds already approved for the Playhouse, Oestmann said, and once the psychical work itself has been laid out, the town will look at how to pay for it.

Public Works Director Tiger Mann said the town had looked at such a ramp in the past “but then it actually blocked some of the doorways coming out of the theater.”

“That’s why we feel it’s important to have Architectural Preservation Studio come in, since they’re already looking at the envelope of the building,” he said.

Mann noted that building such as the Playhouse and LPQ next door have steps up into them because the sidewalks were not installed to be on-grade with their entranceways, so the town will look at a ramping system for the front of the Playhouse that’s similar to the one outside of LPQ.

The steps on the eastern portion of the staircase at the back of the alley will remain in place to serve the rear of the restaurants along that stretch of Elm Street eateries, Mann said.