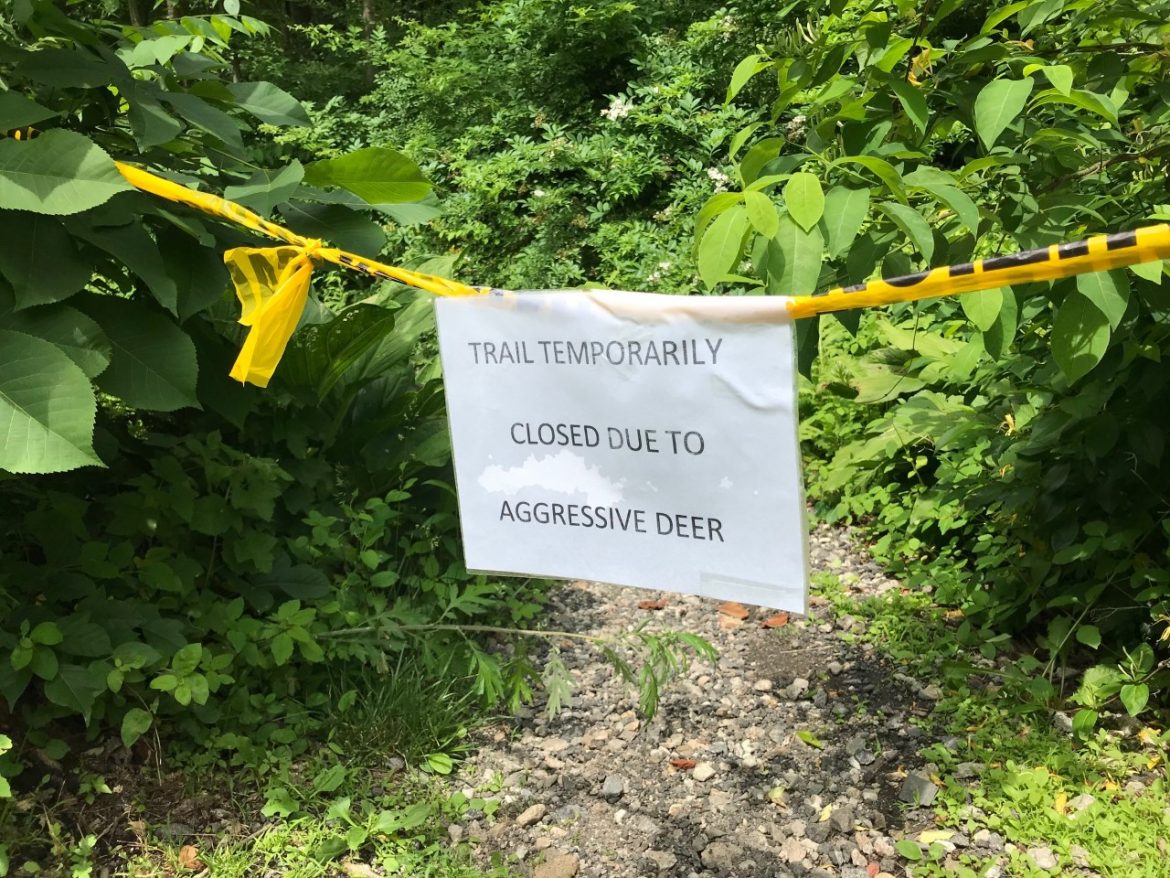 Officials from the New Canaan Land Trust say they’re taking steps to widen a walking trail near Irwin Park, after deer who had funneled into a narrow portion of it reportedly “attacked” several people last week.

Conceived about one decade ago as part of the town’s expanding “greenlink,” the trail allows Irwin visitors who continue north along a sidewalk on Weed Street to walk through the woods and into the back of the New Canaan Nature Center property.

Yet screening planting for neighbors of the trail has encroached on the accessway through the area, creating a stretch of very narrow passage where, last Thursday, at least one of two deer appeared to have panicked when confronted by people walking the trail, according to Animal Control Officer Allyson Halm.

“It sounds to me like the deer was trapped and panicked,” Halm said.

Police received seven reports of confrontations between the panic-stricken deer and walkers trying to pass, including one case where the doe got up on her hind legs and pommelled a woman with her hooves, causing bruises, Halm said.

Halm said when she went to the area Thursday to investigate, she saw a doe and a younger deer, perhaps one year old, and added that there may have been a fawn in the area that she didn’t see, though the newborn deer was not on the narrow trail itself.

Chris Schipper, an ex-officio member of the New Canaan Land Trust Board in his role as town Conservation Commission chair, said several members of the organization walked the trail Monday morning and drew up an action plan.

Similarly to Halm, Schipper said the group conduced that a mother deer “may have been concerned about a newly born fawn hidden in the area.”

“When approached in two directions, the does became very frightened with little avenue to avoid an encounter,” Schipper said in an email.

The trail is also partially hemmed in there by deer fencing installed by the neighbors, Halm said. It wasn’t immediately clear whether that fencing encroaches onto the Land Trust’s conservation easement through the woods.

Schipper said the deer appear to have left the area.

The Land Trust’s next steps include:

Halm said that in 18 years as an ACO, she had not heard anything like the reports of aggressive deer that came in last week.

Schipper said those confronted by the deer clearly expressed their wish that the deer not be harmed.