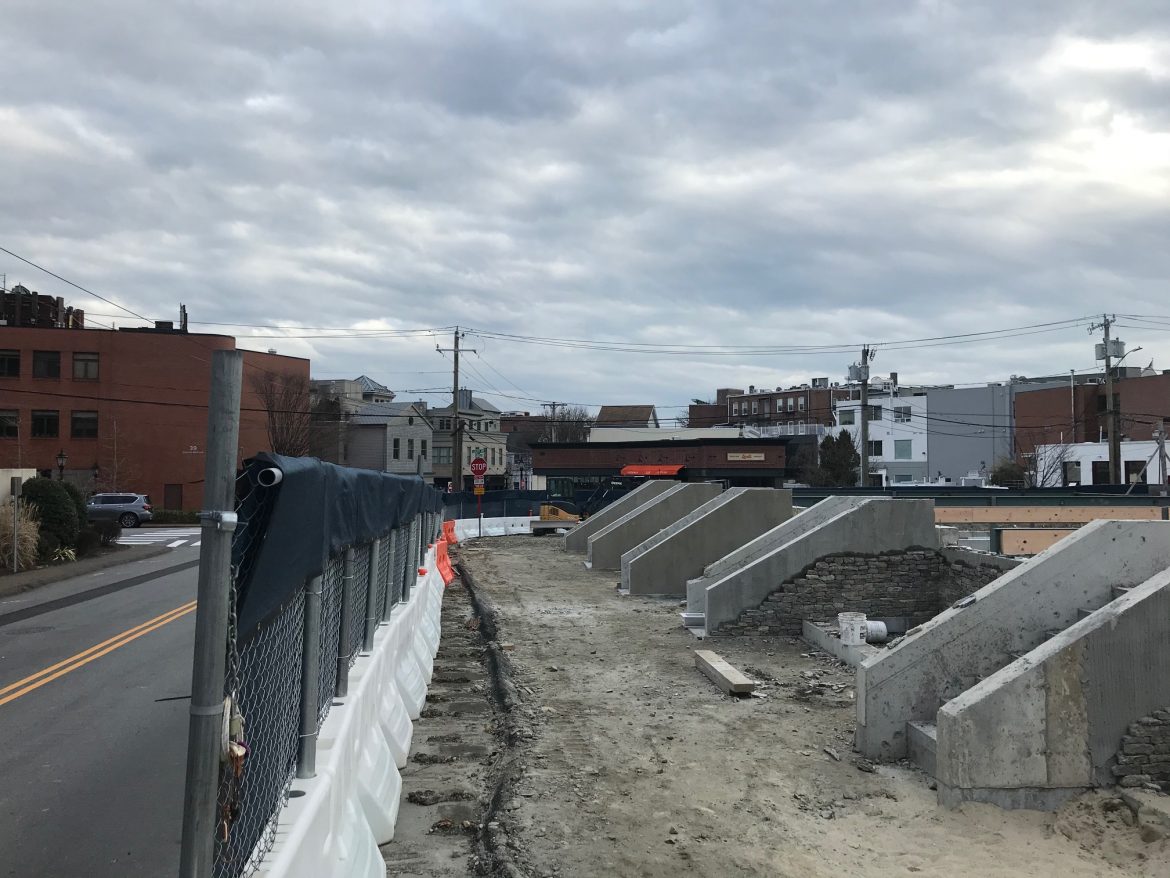 Here's where the sidewalk will go that crosses in front of the townhouses planned for 42 Forest St. Credit: Michael Dinan

Town officials on Tuesday approved an agreement with a private property developer that will give the public access to a 5-foot-wide sidewalk that will front townhouses planned for Forest Street just north of Locust Avenue.

The Board of Selectmen voted 3-0 in favor of an easement agreement with 42 Forest Street LLC, which is owned by Darien-based Silver Heights Development. The real estate investment and development company is creating a new, mixed-use building and adjoining row of townhouses at the northwest corner of Forest Street and Locust Avenue. Located next to the Post Office, it’s the former site of a brick Bank of America building.

Public Works Director Tiger Mann told the selectmen at their regular meeting that the town and property owner “share a property line, so a portion of the project will have a sidewalk that will be on their property and then we will have a sidewalk on our property, so we are looking for a right or easement from 42 Forest Street [LLC] to have the public basically use the entire width of that sidewalk.”

First Selectman Kevin Moynihan, participating in the meeting by phone, voted in favor of the agreement, as did Selectmen Kit Devereaux and Nick Williams.

Devereaux said she was already surprised that the town didn’t own the property in question.

Mann said the town does own a portion of it, in the right-of-way, “but they are allowing us access onto their property to actually utilize a portion of that other sidewalk, since it was very difficult to determine the property line throughout that area.”

“We said, well it will be easier to allow our populous to just walk through it, and then it gives us the full width of sidewalk available, whereby the sidewalk would not have been the full five feet, we needed a little bit more room on their side,” Mann said.

Devereaux asked how the town will divide up maintenance on just part of a sidewalk.

Mann said the town already deals with that situation in other parts of town “and it seems to work quite well.” He noted the plaza area outside of Gofer Ice Cream on Main Street, formerly Baskin-Robbins, where property owners take care of their own areas. Similar areas exist on Park Street, Mann said.

According to Mann, a second agreement with the property owner involves a “ hydrodynamic separator” which separates sediment from stormwater before it’s conveyed through the town’s drainage lines. The town is granting 42 Forest Street LLC access to maintain that system, Mann said.