On conditions that one of the two homes planned for a thickly wooded property near Route 123 shift away from neighbors and that vegetation now screening those neighbors remains as a buffer, town planning officials last week approved the two-lot subdivision of a sloping 4.76-acre parcel on Hill Street. 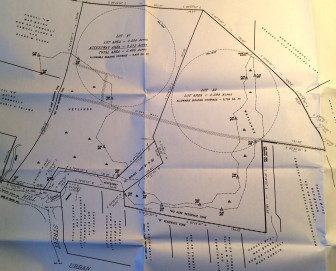 Here’s part of the general plan for Lot 72 on Hill Street, including about where a pair of homes could be located.

Early-stage plans call for two homes on “Lot 72” of Hill Street, a windy road of 10 modest houses and condos that runs just above and roughly parallel to Route 123 for about 500 feet. It dumps into Brushy Ridge Road.

The short segment of Hill Street that gives access to the oversized parcel known as “Lot 72” is wedged between numbers 11 and 37 and includes wetlands almost immediately off the street. Officials this summer approved a driveway across those wetlands, though representatives for neighbors objected to the overall plan, saying new construction would exacerbate runoff, lower property values and do little for the area’s aesthetics. 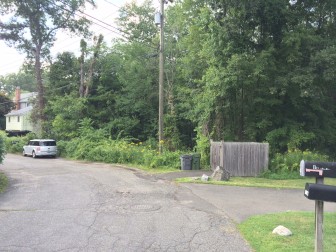 Here we’re looking roughly westward, toward the bend in Hill Street. Just before where the SUV is parked would be where a driveway would go into the 4.76-acre lot on the right. It’s undeveloped now, and much of it appears to be a maple and birch forest. Credit: Michael Dinan

The Planning & Zoning Commission at its Sept. 23 meeting approved the subdivision on 11 conditions including conservation easements of 70 and 100 feet for Hill Street and Urban Street neighbors and that additional screening, as needed, be reviewed by Inland Wetlands officials and approved by the town planner.

“This is a very difficult site because of the extensive wetlands area,” P&Z Commission Chairman Laszlo Papp said at the meeting, held in the Sturgess Room of the New Canaan Nature Center.

Here’s an interactive map of the property (just above the balloon), the article continues below:

Calling the would-be driveway’s position relative to neighbors just to the south of the property an “extremely tight fit,” P&Z Commissioner John Goodwin asked whether the accessway could be shifted north.

“That would go a long way to not only relieving pressure on the neighbor but also providing some real estate there for screening or buffering,” Goodwin said. 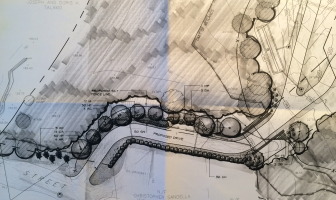 One rendering of a landscaping plan to screen neighbors from a proposed driveway accessing the sloping lot on Hill Street that P&Z has approved for a 2-lot subdivision.

Town Planner Steve Kleppin responded that he asked Inland Wetlands officials about that prospect and was told that no, the very best spot is where it’s mapped out now.

Kleppin described the woods expected to screen neighbors from the eastern home planned for the lot as fairly “dense vegetative buffer.”

Conditions also require that, prior to obtaining permits, the applicant must post a $10,000 performance bond for each lot to ensure no off-site damage to the down-gradient property (the neighbors) “from erosion or water runoff during construction.”

The lot, located within the Fivemile River watershed, has belonged to the same family since it was purchased for $19,500 in 1966, tax records show.

Building plans have not yet been filed. Kleppin said that even if a site plan for one home instead of two were to materialize, the conditions on the subdivision put in place by P&Z—including as they relate to screening—would still hold.