New Canaan High School soccer can claim many of the accolades and plusses associated with celebrated varsity programs such as football and lacrosse: strong coaches, integrated youth organization, beautiful fields to practice and play, championships, pedigree, scores of alumni and even All-Americans.

For Nick Williams—known to many as a selectman, but also a soccer dad who has coached Rec and whose three kids all played in the New Canaan Soccer Association, with one son now on junior varsity and one playing varsity (tri-captain Chase)—one important piece still has been missing for the wider NCHS soccer family, on all levels, boy and girls both, is a continuously updated website. 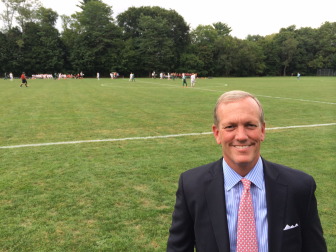 “I think it’s time has come,” Williams, the driving force behind the new NCHS Soccer website, ncramsoccer.com, said on a recent afternoon from the sideline at Conner Field during a New Canaan-Norwalk match.

And now, for NCHS teams, the sport has a central hub. 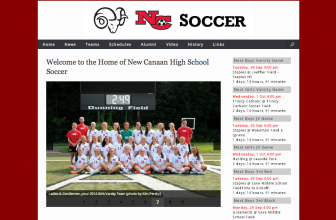 Created in the vein of the NCHS lacrosse site, which serves both the boys and girls programs on every level at the high school, with what Williams calls “generous support” from the New Canaan Soccer Association and with the blessing of Athletic Director Jay Egan, the new website dedicated to soccer is a one-stop shop for varsity, JV and “thirds” teams for both boys and girls.

On it, players and parents can find not only complete rosters and schedules but also match photos and write-ups, coach bios, videos (password protected), an alumni registration page and lists of past county- and state-level honorees. 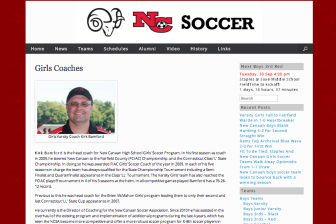 Though live and ready for public viewing, parts of the website (and overall project) remain in development, Williams said—for example, a section that lists individual honors for female NCHS soccer players is still being compiled (from news clippings and yearbooks).

All games will be live-Tweeted (here’s the NCHS Soccer Twitter handle), and the expectation is that the site’s use and traffic will rise with varsity teams fed by an increasingly popular youth program.

“I think you have an unprecedented number of players in the New Canaan High School system,” Williams said. “That shouldn’t be a surprise. We’ve always had a vibrant soccer program that has made some advances in recent years as we have extended the professional coaching to a younger age level.” 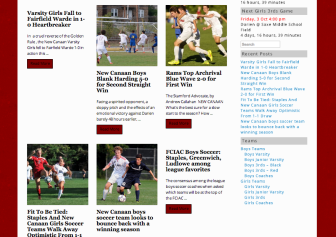 The cost of the website itself is minimal—domain registration and Web hosting being two fixed costs—and Williams is quick to credit others with providing essential support, including Rick Lynch (tech help), Chip Buzzeo (advice) and Mike Murphy (facilitator from the girls’ side).

That the website is devoted equally to boys and girls is important, Williams said.

“It’s the same exact sport for each gender, there is no difference,” he said. “This is a way to promote soccer generally by supporting both the girls’ teams and the boys’ teams.” (New Canaan High School soccer fields seven sides now: one each of a varsity and junior varsity team for boys and girls, then three “thirds” teams—freshmen and sophomores combined—including one for girls and two for boys.)

Though it isn’t clear yet whether full write-ups will come through for each and every team and game, Williams said the site will leverage the proliferation of smartphones for photos and, at least in the early going, he expects most contributions to come through for varsity games.

“There probably will be more of an emphasis on the two varsity teams, because that’s what everybody aspires to, but there will be photos of all the teams in action,” he said.

Looking to the future of the website, Williams said he wants to foster a continuing interest in the NCHS soccer programs for alumni and that ultimately there could be financial support for it, perhaps through a nonprofit foundation.