The town of New Canaan is poised to lose its prized CFO back to the city he’d left three years ago to come here, officials say. 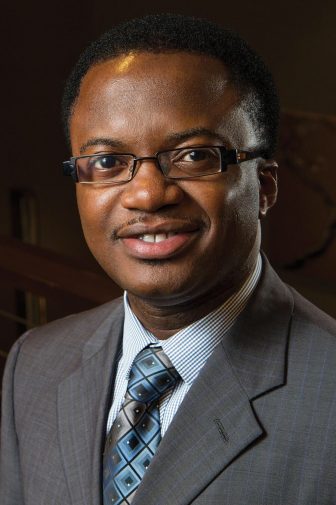 Lunda Asmani will leave effective Dec. 6 to work as CFO of Norwalk Public Schools pending formal approval by that city’s Board of Education, Director of Human Resources Cheryl Pickering Jones said when asked about his resignation.

Hired as municipal budget director in 2018 and appointed to the larger role of CFO one year later—a combination of the budget and finance director jobs—Asmani’s departure will be “a huge loss,” she said.

Asmani is leaving the town on good terms, Jones said. He’s given the town verbal notice and is expected to give written notice Tuesday after the Norwalk school board votes, she said.

Asmani when asked about his time here said he’s had “a great experience working in New Canaan.”

“The level of volunteerism that is here is unlike any other place that I’ve worked,” Asmani said. “Our elected boards and appointed commissions are just amazing. They work well as a team. The staff here has been extremely friendly. I was just presented with an opportunity that was one I could not pass up in terms of my career. The level of responsibility was something that was just hard to pass up. It was not something I was looking for.”

Asmani said that at this point the position with Norwalk Public Schools is a “recommendation” and will be a formal decision once the Board of Ed there votes on Tuesday night.

A central figure for information and guidance during three budget seasons, including through the pandemic, Asmani long has been described by town officials and colleagues of highly capable and collegial. He’s worked closely in three-plus years with New Canaan’s funding bodies, the Board of Finance and Town Council, as well as the Board of Selectmen—recently outlining guidance for the town’s allocation of $6 million in federal American Rescue Plan Act funding—and was nominated this past summer to the executive board of the Government Finance Officers Association.

Selectman Nick Williams when asked about the job that Asmani has done for New Canaan that the CFO has been “bright, hard-working, responsive, respectful and kind.”

“I cannot think of better qualities than that in a CFO,” Williams said.

He added, “This is a loss for New Canaan. But I’m delighted for Lunda. This is an incredible opportunity in Norwalk. Unfortunately it’s tough for us to compete, because things are greener for Board of Ed CFO’s then they are for municipal CFO’s, but it is certainly a loss for the town. I have been a selectman a long time and have worked alongside a number of CFO’s and he’s right there, near or at the top.”

Williams said that Asmani has done “a great job since he’s been CFO.”

“He gets along with everyone,” Williams said. “Wish him the absolutely best going forward. And knowing Lunda, I would not be surprised if he took on an even larger role at some point in his future.”

Asmani worked as director of management and budgets for Norwalk for two years prior to coming to New Canaan, according to his resume. He holds a bachelor’s degree in urban planning and economics from the University of Dar Es Salaam in Tanzania and a master’s degree in public administration fro Wichita State University in Wichita, Kan. Prior to Norwalk, he worked as assistant city manager for budget and finance in Newtown, Kan.