A man jogging on Hoyt Farms Road on Tuesday morning told Animal Control that he saw a mountain lion pass in front of him.

New Canaan Police at 1:02 p.m. on July 14 received a report of graffiti written on a bathroom wall at New Canaan Country School.

This comment published on NewCanaanite.com at 3:10 p.m. Wednesday was the 10,000th approved comment posted to the site since launching in January 2014.

The Sneddon Team in 2021. Contributed

William Pitt Sotheby’s International Realty announced Monday that The Sneddon Team of the firm’s New Canaan brokerage ranked as the No. 1 real estate agent team in Connecticut according to the 2021 REAL Trends list of “America’s Best” real estate professionals. The team took top honors in the “small teams by volume” category of the list, which is based on performance in 2020. The five agents on The Sneddon Team— Jaime and Kendall Sneddon, Ashley Howell Petraska, Bonnie Sztam and Haley Bise—closed more than $130 million in volume in 2020 to claim the top spot, according to the firm.

A bike was reported stolen from the front yard of an East Avenue home at 5:57 p.m. on July 17, according to police. 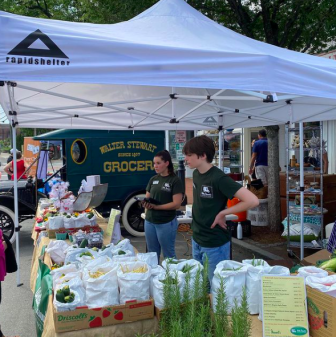 The Board of Selectmen entered into executive session during its regular meeting Tuesday. According to the meeting agenda, the selectmen were “to discuss a potential real estate transaction.” It’s unclear which property they discussed, however, a line item in a legal bill approved for the meeting refers to a “220 Elm Street Transaction.” First Selectman Kevin Moynihan is listed as communicating with lawyers regarding the town-owned parcel, the legal bill said. Bankwell owns the office building at 220 Elm St., though New Canaan owns the .73 acres on which that building sits, tax records show. Two years ago, Moynihan said he’d discussed selling the property.

Here are two upcoming music events in New Canaan that are worth putting on the calendar:

Police on Sunday evening arrested a 34-year-old Millport Avenue man and charged him with violation of probation. An officer stopped him at about 5:47 pm. for speeding, and a records search showed that authorities had put out a paperless re-arrest warrant for him. According to Connecticut Judicial Branch records, the man had pleaded guilty in 2020 to interfering with an officer and first-degree reckless endangerment, and was sentenced on each count to one year of jail, suspended execution, and three years of probation.

A New Canaan Police officer saw a mother bear and two cubs last Saturday in the area of Benedict Hill and Cheese Spring Roads. Asked about their presence, Animal Control Officer Allyson Halm said the concern is that the bears are taking up residency in town rather than roaming through it.

The selectmen on Tuesday congratulated New Canaan CFO Lunda Asmani on being nominated to the executive board of the Government Finance Officers Association.

Police at about 5:29 p.m. on July 14 received a report from an individual on Summer Street that they were being followed by a vehicle. The report was unfounded, police said.

An emaciated and sick senior cat found breathing but not moving on Sagamore Trail at about 11:44 a.m. Monday, with maggots in its rear end, was humanely euthanized, police said.

Finally, the New Canaan Building Department on Wednesday received an application to demolish the 1955-built house at 69 Windrow Lane.