Saying that buying some time prior to a planned demolition could help the owner of an antique and conspicuous Valley Road home find a way to transfer the structure to preservationists or otherwise avoid the wrecking ball, officials voted unanimously last week to impose a 90-day demolition delay. 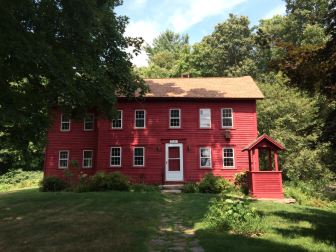 Representatives of the owner of 1124 Valley Road, Norwalk’s first taxing district, are not fighting against that delay, members of the Historical Review Committee said at their March 1 meeting.

It would be interesting for the public at large “to know the purpose of the use” of the 18th Century home, committee member Laszlo Papp—formerly a neighbor of the house, for 54 years—said the meeting, held in the Town House of the New Canaan Historical Society.

“Is there going to be open space attached to the land the water company has or do they intend to build a McMansion there or exactly what is the future?” Papp said.

He added: “During the period of the delay, I think, all political pressure should be borne to Norwalk to influence that [trustee]. I think to come to terms and possibly arrange a friendly purchase and—even if it would be for less than they desired—I think the town leadership can exert some influence in that direction.”

James Fulton, an attorney who serves as trustee for the taxing district, has said it’s prohibitively expensive to maintain the house, which has been rented out in the past but ahs been vacant for a time.

New Canaan Chief Building Official Brian Platz, a guest at the meeting, said the owners “have had a hard time keeping tenants because the heating costs are exorbitant” though options such as adding insulation could bring down those costs.

In a formal objection letter to the planned razing—a demo application came into the town Feb. 12—town resident Mimi Findlay, chairman emerita of the New Canaan Preservation Alliance, noted that a Historical Society-commissioned report found that “the first record of this property was in 1761 when Caleb St. John purchased 10 acres ‘with appurtenances’ from Elizabeth Everett, later buying more land, but no dwelling house from her, selling it to her son Joseph in 1795.”

The history continued: “Joseph Everett was a farmer who had married, as his second wife, Hannah St. John, in the Congregational Church, and had seven children. When Joseph died in 1804 his oldest child, Esther, who was married to Silas Whitlock at the time, inherited the property. The remaining architectural features from this Federal period structure consist of a basement cooking hearth, a stone foundation and hand hewn posts and beams, indicating a one story, one-room cottage. There is no bake-oven in the basement fireplace, although there may have been one in a fireplace above it, now covered over or removed. It is possible that the owners, the Everetts, did not Iive in this cottage or perhaps were tenant farmers on a larger farm.”

Findlay called the comprehensive history and list of owners “impressive and informative.”

“Not only are there the old New Canaan names but also two immigrant families as well, participants in early our 19th c Militia, World War 1, and the Korean War. From tenant farmers, cobblers, a tanner, perhaps a mill-owner, to gentleman farmer with professional help on his 200 acres, a window opens onto centuries of New Canaan’s cultural and social history.”

The NCPA’s Charlie Robinson said that members of the nonprofit organization had walked through the house and property and came to a consensus that a delay may be “advantageous to all parties” in order to “negotiate a better option” than demolition.

Farrell said the owners have expressed that the home’s interior has undergone so many changes that there’s little historical value to preserve there.

Rob Fryer, a Board of Directors member of the New Canaan Land Trust, which owns the 10.3-acre Browne Wildlife Sanctuary adjacent to the house, said there are historical reasons to preserve the structure, and others. For example, control of the property could supply three or four parking spaces for the Sanctuary, he said, or the house could “serve as a permanent home” for the Land Trust.

“The Land Trust has no permanent place to have meetings to have an office or anything like that and so the building could actually be used by the Land Trust if we could find a way to preserve it,” he said. 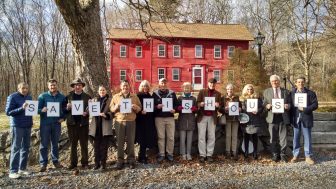 Recently, a broad coalition of local nonprofit organizations including the  Land Trust,  Historical Society,  Preservation Alliance, New Canaan Conservation Commission as well as the Connecticut Trust for Historic Preservation have banded together in an effort to preserve the house.

Art Berry, the Land Trust board’s president, said he wasn’t sure why the first taxing district wanted the land initially.

“There was some talk of them being required to build some kind of a berm and that has gone out window, apparently, and I think as time has gone by, less likelihood there would be of a significant outcry that they bought the land at one price and are selling it at another,” Berry said.

“And of course it is costing them money to maintain the house, just the basic insurance, taxes and so forth, so they be better off. I think what they didn’t realize is the current state of the real estate market—they think can just raze it and somebody will pop in and somebody would just purchase the land, it just doesn’t seem that it’s a reasonable expectation at this point. We would like to see house preserved, obviously, to maintain the character of the town. We would also like to see the land basically stay undeveloped because it abuts our property up there.”