After a New Canaan homeowner ignored a blight citation issued two summers ago, town officials now are notifying a lien-holder for his property as they prepare to assess fines. 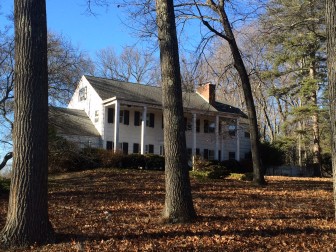 The property at 4 Woodridge Circle has been found in violation of New Canaan’s blight ordinance. Credit: Michael Dinan

The town also will seek to place its own lien on the long-vacant Colonial at 4 Woodridge Circle, officials said.

Owned by Stephen Perry, according to tax records, the neglected 3,608-square-foot home sits on 2.05 acres.

The town on Feb. 27 informed JP Morgan Chase Bank about the Notice of Violation issued in July 2015 to Perry, according to correspondence obtained by NewCanaanite.com following a formal request.

The enabling Connecticut state statute for blight ordinances requires notification of all lien-holders.

Though Perry did not respond to the town’s initial Notice of Violation, the municipality did get confirmation via return receipt that homeowner received it, officials said.

The property meets at least two sections of the town’s definition of blight:

The original notice stated that Perry had 14 days “to abate all noted conditions of blight at which time I will issue a citation.”

“If you should fail to abate these conditions after being issued a citation, fines may be imposed in the amount of $100 per day that any conditions of blight remain,” the notice said.

Had fines started to accrue straightaway—and town officials in the past have made them retroactive—Perry as of now would incur more than $62,000 in fines.

New Canaan’s blight ordinance is outlined in Section 7A of the Town Code. Blight itself is defined as “Any condition or combination of conditions in public view upon any residential premises that tends to devalue real estate, or that is a negative influence upon the neighborhood or upon any neighbor’s use and enjoyment of his or her own property, due to, characterized by, or reflective of neglect, decay, deterioration, disrepair, rotting, overgrowth, infestation, dilapidation, or failure to maintain.”

Under Section 7A-3, it’s the job of property owners to maintain the exterior of structures and grounds, and tenants or occupants of residences must “refrain from creating or maintaining blight.”