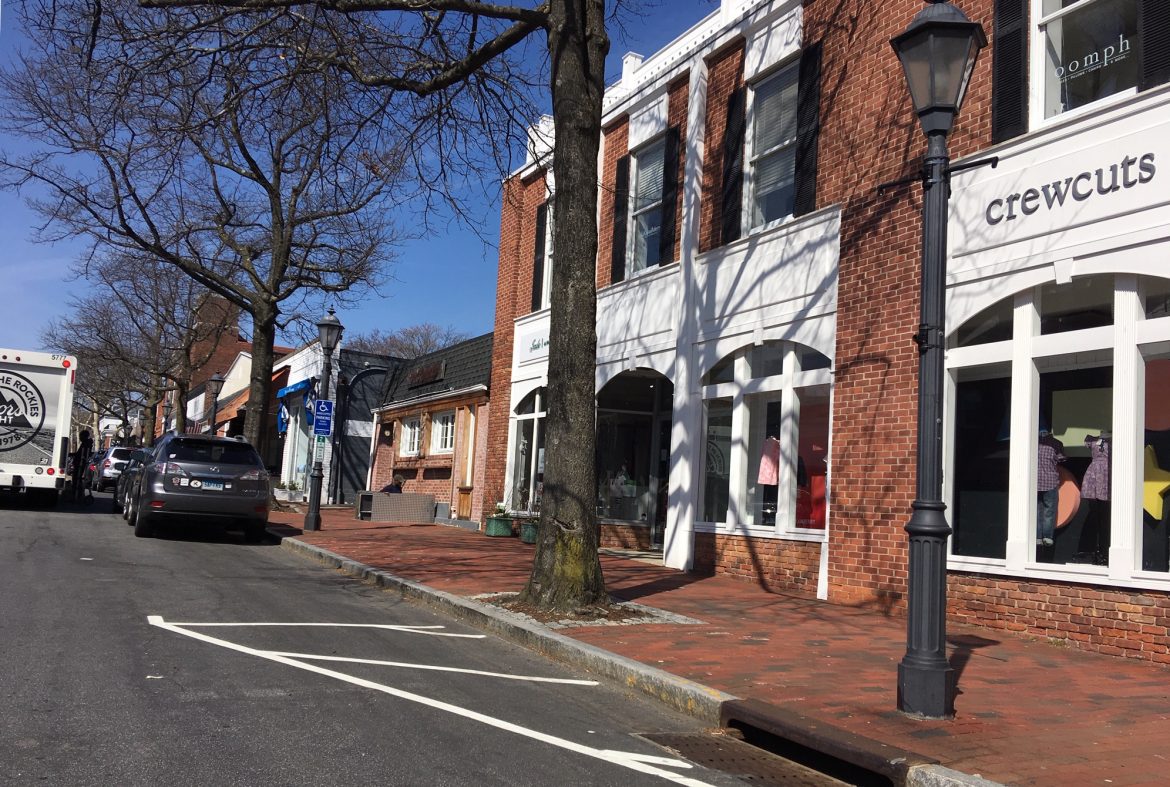 This is where she did it. Credit: Michael Dinan

The Parking Commission voted 4-0 at its most recent meeting to uphold a $150 ticket issued to a New Canaan woman who had parked in a disabled space on Elm Street.

Sandra Rama told members of the Commission during their March 14 meeting that she had a “handicapped parking sticker up until November” following a hip replacement one year ago, “so I am very aware of not parking in a handicapped spot.”

Yet at about 3:46 p.m. on Jan. 8, she received a ticket for parking in the disabled space at Elm and Main Streets.

“I pulled up and, you know, there has been a lot of changes to Elm Street and it’s very not marked,” Rama said during her appeal hearing, held at Town Hall. “There’s no lines between the spots and I actually backed up so that someone could pull in front of me and that was actually the right spot to be in, in front of where I was. I didn’t really see the sign.”

Ultimately, Commissioners Keith Richey, Pam Crum, Peter Ogilvie and Stuart Stringfellow voted to uphold the ticket. Commissioner Chris Hering recused himself from the vote because, he said, Rama is his neighbor.

According to Rama, “all the other spots in town” that are designated for disabled drivers are “marked on the ground.”

But at the Elm Street space, “there’s no lines,” she said.

“So you really can’t tell where the parking is there. It’s not clearly marked. I never saw it. I believe it was a foggy day a little bit, the sign is to the right.”

truly would never have parked in a spot like that. Having a handicapped parking sticker myself, I would never do that.

Yet that spot has been a designated disabled space for more than 20 years, Richey said.

Parking Manager Stacy Miltenberg noted that “there is a sign that says handicapped parking” there and said, “She is parked right next to the sign.”

Commissioner Peter Ogilvie, looking at a photo of the car in relation to the sign, said, “It’s really clear.”

Rama responded, “Well it was a little bit foggy to me. Again if it was on the ground, I never would have parked there. I think the town should mark them.”

According to Miltenberg, state law says that “signs rule” and there’s no requirement to paint the asphalt as well.

When Rama said the “everywhere else in town” has paint on the ground, Miltenberg noted that none of the three disabled spaces on Elm Street have anything on the ground.

Rama said, “Right but they are the new ones. In my mind you have not finished it.”

Richey said that Rama’s points about her hip replacement and old disabled parking sticker were not relevant.

“To me, there was just no cogent defense there,” he said. “Anyone feel different?”