Town officials last week upheld a $30 ticket issued to a New Canaan woman who pulled into a no parking zone outside Dunkin Donuts on a Tuesday morning last month. 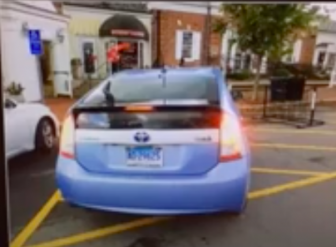 This is her. Photo courtesy of the New Canaan Parking Bureau

Nataliya Oliynyk told members of the Parking Commission during her Nov. 5 appeal hearing that no parking spaces were available when she pulled her blue Prius not a yellow hash-marked area outside the Elm Street coffee shop around 10 a.m. on Oct. 6. Oliynyk was there to pick up her son, she said.

“I never left my car,” Oliynyk said during the hearing, held via videoconference.

“I just stopped for one minute. I never left my car. To pick him up and not to create traffic and we left. And the lady was writing the ticket and I said it literally was less than a minute and we are leaving right away, and she said no, you can appeal. And that’s my story.”

Chair Keith Richey said that, in the future, she cannot park in such a hash-marked area for any length of time.

“Just so he can jump in the car?” Oliynyk asked.

Richey said Oliynyk may have been better off double-parking and putting on her blinkers.

She replied, “My blinkers were on and I swear it was less than a minute,” adding, “We all work, sometimes between meetings you just run, because you just need pick the kids up.”

The Commissioners told Oliynyk that state law prohibits anyone from parking in the area that she did, which is a no-parking zone because it’s near the crosswalk that extends from the Playhouse.

She replied, “I never even shut off my car.”

The Commission wasted little time on the matter during deliberations.

Richey said, “There really wan’t much of an argument there. She was parked in a spot that created a dangerous situation.”

In addition to those Richey and Crum, those voting to uphold the ticket included Commissioners Peter Ogilvie and Laura Budd. It wasn’t immediately clear whether Commissioner Chris Hering voted on the ticket. He was late to the meeting.