Town officials this month upheld a $30 ticket issued to an Uber Eats driver who pulled into a no-parking zone outside Town Hall to pick up food from Ching’s Table. 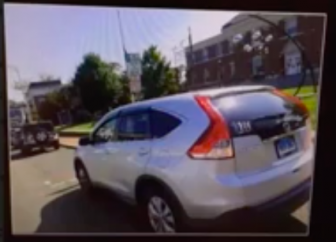 Vikar Vahora told members of the Parking Commission during a Nov. 5 appeal hearing that he’d circled the block twice before parking in the space up against the Town Hall driveway.

“That was probably my first or second ride and I went right across the street from where Ching’s Table is and I was charging on my credit card and I actually attached the receipt to my ticket and my appeal, too, that it was only two minutes that I went in and went out and that when I was coming out you were already writing the ticket,” Vahora said during the hearing, held via videoconference. “I explained to the person that I am an Uber driver, I am new in this area, if you can new please let me go for this time and I will make sure that this will not be happening again.”

The Norwalk Man added that the ticket—issued at 1:58 p.m. on Sept. 21—is a financial hardship and it takes three hours of Uber driving to earn $30 in wages.

Saying a legal space would’ve opened up if Vahora had only waited a few more minutes, that the nearby Locust Lot is currently free and that it’s difficult to develop special rules for delivery drivers, the Commission voted 4-0 to uphold the ticket.

“I find that a lot of the Uber and GrubHub guys are parking on the driveway itself,” Commissioner Peter Ogilvie said during deliberations. “They come in to Town Hall, they turn around and then they face out toward Ching’s Table and park right before that stop sign.”

In addition to Ogilvie, Chair Keith Richey and Commissioners Laura Budd and Pam Crum voted in favor of upholding. Commissioner Chris Hering was late to the meeting.

Richey noted during the hearing that at the time Vahora’s car was ticketed, there appeared to be legal open spaces in front of it.

Yet the street “was full” at the time, Vahora said.

“I went around Main Street, Forest two times and I could not find parking and my time was up to pick up the food,” he said. “My parking just the trunk part was just out. Everything else the car was parked correctly. The other two cars were not parked correctly and that’s the reason why I couldn’t completely park my car. And then when I came out of course the other two cars were gone and then my car was the only one stuck there.”

Richey during deliberations said Vahora’s appeal was “the least bad” one lodged that night by ticketed motorists.

“But still, where he was parked and if he had just waited three more minutes, he would have had a legal parking spot,” Richey said.

Parking Manager Stacy Miltenberg said that when enforcement officers seeing cars parked in the illegal space, they issue tickets “if we can’t move them.”

“We try to move them first, but if nobody is in the car, we will ticket that,” she said.