Town officials last week denied a West Road homeowner’s request to amend without an entirely new application the exterior of a renovated barn, from the traditional red-painted wall boards of a century-old structure to stone. 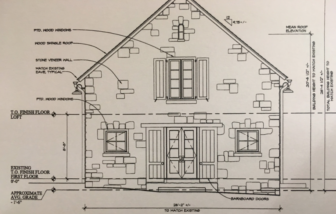 The ZBA turned down a West Road property owner’s bid to redo a century-old barn with this stone exterior, without a new application for a variance. Mark A. Finlay Architects

Saying a stone exterior would create a more substantive change than what they already had approved, members of the Zoning Board of Appeals during their regular meeting on April 3 said a new variance would be needed in order to redo a barn at 416 West Road with a stone exterior.

The ZBA’s rationale for approving an application that came before the board in December was to match existing barns along that stretch of West Road, but “I feel like this is completely in the opposite direction,” board member Luke Tashjian said at the meeting, held at Town Hall. 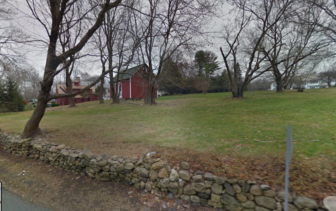 A look at the property at 416 West Road. Google Streetview

“The only thing still looks like barn is it has got these doors on it,” he said of a new set of drawings. “If you take these doors off, it looks like a stone house to me.”

The ZBA voted 5-0 to approve only a minor change to the windows on the barn, which is to undergo a comprehensive renovation.

The board with some reservations had approved at its Dec. 5 meeting a plan to replace the existing barn’s foundation and roof, following an application made on the property owner’s behalf by attorney Christopher Bristol of Greenwich-based Gilbride, Tusa, Last & Spellane LLC. That project required a variance because the structure already encroaches on a setback and the project had been expected to extend further into the side yard as well as raise the building height and total building height (because insulation is to be installed). The barn is to get a new fireplace, replacement wet bar, bump-out for a sitting nook and full bath with hot water. ZBA members said they feared the new structure represented a residence but had been assured it would get no kitchen and was to be used as a hangout area for family and guests.

Bristol in his application for an amendment to the December approval to allow for the stone exterior said the applicant felt it would “reflect the rural character and feel of New Canaan’s past and will remain a welcome addition to the neighborhood and the town.”

Joseph P. Mulligan, a partner at Southport-based Mark Finlay Architects said the property’s owners “are committed to rebuilding the barn in an effort to assist the town of New Canaan in preserving the contextual fabric of the town.”

“They are willing to make a significant financial investment in constructing the barn to ensure that a visual component of the past remains an integral part of the town’s landscape. The history of Connecticut is rich with farming and the diverse barns built to serve them. Connecticut barns evolved into many styles reflecting the various needs of Connecticut’s farmers. Unfortunately, the twentieth century saw many of these historic barns demolished, rather than rebuilt, forever erasing the character of Connecticut’s neighborhoods. In keeping with the history of adapting barns, a new stone barn has been proposed for 416 West Road. The existing barn footprint and dimensions will be maintained while the structure will comply with today’s standards of energy efficiency and safety. Even more important, this barn will serve as a visual symbol of Connecticut’s agrarian past while ensuring its longevity for future generations to enjoy.”

Yet according to ZBA member John Mahoney, the new plans for the structure would not amount to “preserving the barn.”

ZBA members thanked the applicant for being forthcoming about the change in plans and appearing before the board to seek permission.