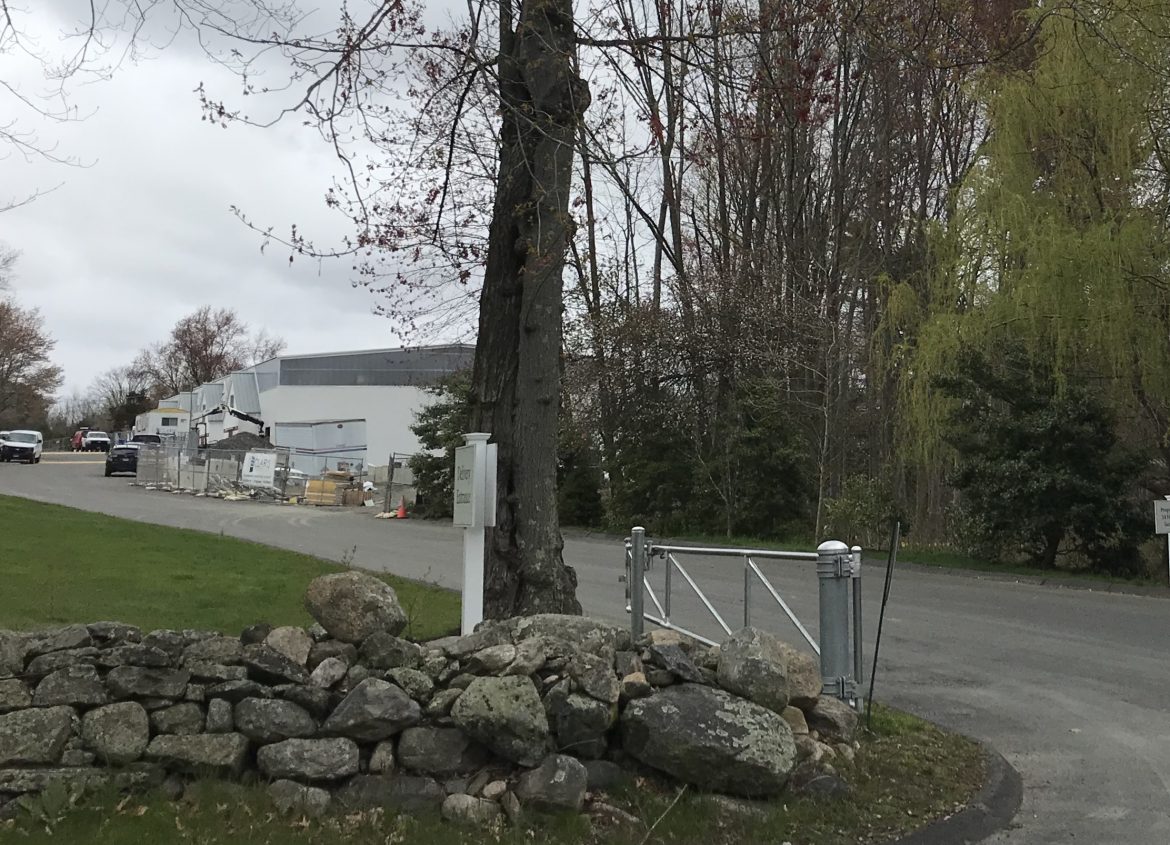 Saying they’re already experiencing unwanted light from the new athletic facility that New Canaan Country School is building off of Frogtown Road, neighbors are urging the town to deny a request to modify a condition of the project’s approval.

An attorney representing the private school applied to the Planning & Zoning Commission to remove a requirement that “black-out shades” be installed for all windows visible from a property to the east “and including any window from which light can be projected or reflected.”

Attorney Steve Finn of Stamford-based Wofsey, Rosen, Kweskin. Kuriansky LLP noted that the abutting neighbor whose concerns prompted the Commission to create the condition—a woman who sued the town in appealing the original approval—no longer resides at 579 Frogtown Road. In fact, Finn said, she sold the property to New Canaan Country School as part of a settlement agreement.

Yet two neighbors who live directly across Frogtown Road from the school—Joseph and Kim Bozzella of 584 Frogtown Road and Jack and Carol Liebau of 568 Frogtown Road—filed letters of objection with P&Z urging them to deny the application.

The Liebaus said in their letter that “the lighting from the interior of the athletic facility, shining through the glassed-in portion near its ceiling, is quite glaring after dark from both the first and second stories of our home—including our kitchen; home office; play/study room; and glassed-in library where we frequently entertain.”

“We have always been glad to be neighbors to both Country School (where our children have attended since 2011) and the Winter Club,” the letter said. “We want to be good neighbors; the problem with this light, however, is that every evening, our home feels like it is now located in much more of a ‘mixed use’ area than the darker suburban location into which we thought we had purchased. During the construction period, we have tried to be understanding of the other bright lights that were at the top of the building and visible from our home (as well as construction-related noise before 7 a.m.), as we have realized those conditions would be temporary. The bright lights shining within the building, however, are permanent—and most annoying after sunset in winter, when trees are bare.”

P&Z is scheduled to take up the application during its regular meeting, to be held via videoconference at 7 p.m. Tuesday.

The Commission in March 2018 voted 9-0 in favor of a Special Permit application filed on behalf of the school for its two-story, 25,000-square-foot athletic facility, and three months later approved the site plan (with 17 conditions) by a 7-1 vote.

Finn in an April 24 response letter to the neighbors said that the lighting they’re describing “is temporary and is only being used during construction.”

“It is in no way representative of the permanent lighting that will be installed once the building is completed,” he said. “The construction lights are intended to be as bright as possible in order to fully illuminate all aspects of the interior while work on the project is ongoing. Construction lights also do not have any shades or directional control. The permanent lights, the installed, will be significantly less bright and will have solid shades on the top which will direct the light downward.”

He added that photos submitted to P&Z were taken when the building had an uncovered opening, that areas of the building itself will be covered in a translucent material that will reduce the amount of light emanating from it, and that an approved landscaping plan will screen the athletic facility further.

“On behalf of New Canaan Country School, we are confident that when the building is completed and the landscaping is installed that there will be no significant impact on these neighbors,” Finn said in the response letter.

The Bozzellas in their letter said that the area already “suffers greatly” from light pollution during the winter months from the Winter Club.

“These concerns intensified as the builder decimated the existing natural screening of mature trees, revealing new and unwelcome sight lines to existing NCCS buildings from our property,” their letter said.

Far from seeking to eliminate the requirement for black-out shades, school officials as recently as November had assured neighbors that the athletic facility would be sufficiently screened, they said.

“So you can imagine how we felt to receive this letter, stating not only were they not considering additional plantings but were looking to renege on the commitment to the contractually agreed-to screening. We have tried to reserve judgment on the project until completion but this letter has forced us to speak now.”

The Bozzellas added: “One cannot appreciate the outsized scale of the new gymnasium and its footprint on the surrounding area—conspicuous in daytime, and because of continuous nighttime illumination of the entire top floor, very much at night—without seeing for oneself. As such, we respectfully request that the town of New Canaan conduct its own investigation, rather than simply accepting applicant’s representation and warranty that ‘black out shades’ are not necessary, and that ‘no measurable light’ would occur beyond the property line. We believe an independent source is justified in this circumstance, not just one retained by the owner.”

The black-out shade-related condition of P&Z’s original approval includes that a “curtain shall be mechanically operated with automatic controls that include an electric eye to detect times of the year when the sun has set and shall be activated within 10 minutes of sunset to prevent light projecting from the athletic facilities.”

It also includes a requirement that “All non-safety related interior light shall be turned off nightly by 9 p.m.”

Finn is asking P&Z to update that language so that the lights may be on later during the “few times a year New Canaan Country School may wish to use the gymnasium for special events such as school dances and other activities”—events that require prior approval from the town planner.