Though they conceded that a footbridge in Mead Park is structurally unsound and that a proposal to finish and maintain an area memorializing New Canaan’s World War II vets is nice, parks officials say greater detail is needed in order to support the plan more than conceptually. 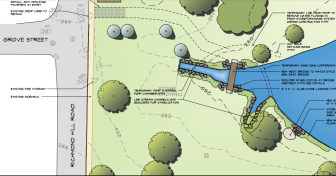 A detail of a plan to complete the Gold Star Walk at Mead Park, a footpath with trees, a plaque, benches and one footbridge now in place that’s dedicated t the memory of the 38 New Canaanites who died during World War II. Courtesy of Keith Simpson Associates

Private funds would be used to build an estimated $37,000, second bridge over the main in-flow to Mead Pond at one end of the “Gold Star Walk,” as well as to ensure that trees dedicated to New Canaanites who perished during WWII are healthy.

Yet the Park & Recreation Commission needs a detailed cost estimate and assurances that private monies are in place to repair an existing footbridge, according to Sally Campbell, the group’s chairman. 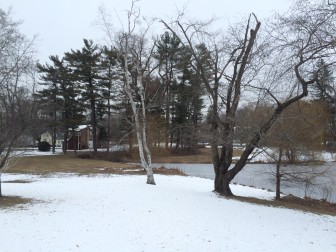 A footbridge over the main inflow to Mead Park has always been part of the Gold Star Walk plan. Credit: Michael Dinan

“We cannot approve anything unless we really see a firm plan,” Campbell told local landscape architect Keith Simpson during the commission’s Feb. 10 meeting, held in the Douglas Room at Lapham Community Center. “And we could probably approve in concept you going forward with this, but before we could approve any bridges or planting of trees, we would have to know that you have the money, we would have to see the design, we would have to know that you cleared it with [Department of Public Works Assistant Director] Tiger [Mann], that the engineering is all final.”

A close-up of the proposed footbridge at Mead Park. An existing footbridge in need of repair would match it. Courtesy of Keith Simpson Associates

Campbell and other town officials for more than one year have said out loud that they favor of a plan—advanced by 1947 New Canaan High School graduate Jim Bach, with support from Simpson and others—to ensure that the Gold Star Walk is safe, traversable and attractive. Yet no middle-ground has been reached in terms of just what pieces of that plan the town would pay for versus a private fund that Bach has overseen.

Dedicated at the close of World War II to the 38 New Canaan men who lost their lives while serving during the war, the Gold Star Walk starts just inside the gate at Mead Park’s entrance and runs along the eastern and northern edges of the pond. One tree had been planted for each honored man, and the Gold Star Walk was rededicated—its trees replanted—with funds raised privately from survivors and local veterans, in 2003.

Part of the Walk includes a footbridge over the second inflow to Mead Pond, and Simpson at the meeting underscored the need to replace its plywood surface and rickety rail.

“At some point you may have to rope this bridge off,” Simpson said. “If you lean on that handrail—I mean I don’t know how you can sort of live with it. Somebody could fall off of that bridge and send the town a bill.”

(Campbell toward the end of the public discussion with Simpson told him that in the future it would be “helpful to come to us and give us an idea of what you are planning, because then it goes much smoother.”)

In addition to identifying and replacing the dead and dying among the 38 flowering trees, repairing the existing footbridge and installing a new one (a phase of the project that had been put on hold for the pond’s 2008 dredging), the overall plan for the Gold Star Walk also includes installing a second sign at the western end of the Walk so that people know it’s there. The Gold Star Walk also includes benches and a plaque affixed to a boulder that lists the New Canaan servicemen who died during World War II.

Their names include many multi-generational New Canaan families well known to townies. They include (a full list can be seen in the photo at right, and each man’s name is written in full at the end of this article) Benko, Conner, Gravereaux, Kelley, Lapolla, Ready, Scott and Urban.

Park & Rec took no formal vote to support Simpson’s plan, though they voiced support for the concept and the Inland Wetlands Commission is scheduled Monday night to accept formally his application for the bridge work (and make a decision next month).

Commissioners asked whether Simpson had secured a cost estimate for building the new bridge (yes, one early estimate is about $37,000 including the extensive work needed for installation) and what type of wood the proposed new bridge is made of to last so long (cedar).

Commissioner Jason Milligan said Simpson’s plan “sounds terrific” and that “to the extent that you are paying for it, I would vote to bless it.”

“But the question is: How much that other bridge would cost and how to pay for it?” he said.

Rebuilding the failing footbridge, it the project were to undergo through the town’s process, would need to be inserted into a proposed 5-year capital plan, parks officials said.

Simpson said the existing footbridge would cost about $7,000 to repair.

Park & Rec commissioner Francesa Segalas said the group also would need details about how the structures and footpath of the Walk itself would be maintained.

“There are a ton of weeds growing on one there and poison ivy, as well,” she said.

Simpson said maintenance of poison ivy is “one level” but that the failing footbridge is “a whole different level” in that it’s “very, very poorly constructed.”

“Nothing lasts forever—no parking lot lasts forever, no building lasts forever but in terms of maintenance of the bridge, there is really no maintenance on this [new proposed] bridge until it is really 80 or 100 years old and it needs to be replaced,” Simpson said. “But the other bridge, looking at the construction and the nature of it and so on, I think it really was constructed for a much shorter lifespan than this bridge.”

That said, there’s a structural framework in place to improve the existing bridge without completely rebuilding it, Simpson said.

“It already has immense steel beams underneath it” so “minor demolition” would be needed prior to “rebuilding the wooden bridge around that very sturdy structure,” he said.

In order to anchor the structural beams of the second bridge, the pond level would have to come down near the dam, pumped out and then reinforced concrete footings would be installed four feet below the bottom of the pond itself, Simpson said.

“It is serious work,” he said.

Campbell said the commission would “need to know what the cost is going to be.”

“That you actually have the cost, true cost, and then once you raise the money, then we can give you the final approval,” she said.

Because the project is a non-budgeted capital improvement to public land, it would require approval from the Board of Selectmen, Board of Finance and Town Council.

Simpson last summer had proposed a wider-ranging, master plan for Mead Park that included the Gold Star Walk improvements. He said during the meeting that a makeshift ice skating rink could be installed at Kiwanis Park rather than Mead.