It was 1979 and Steve Benko was one year into his job as New Canaan’s recreation director when the town started talking to Manhattan-based Music Performance Trust Fund, a recording industry nonprofit dedicated to promoting live music. 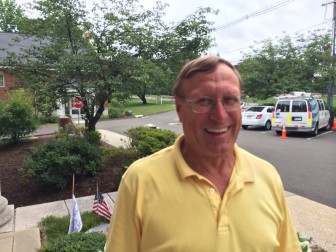 That organization worked through local unions to line up bands for live performances in towns such as New Canaan, splitting the cost of a show 50-50, Benko recalled.

New Canaan had recently held a successful U.S. Coast Guard Band concert at Waveny, off of the expansive balcony behind the main house, and so the town moved ahead with the nonprofit for a series of four shows in the summer of 1980—the first season of a series that’s emerged as fun, beloved tradition for New Canaanites each summer. 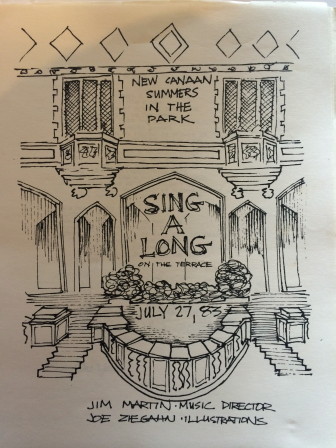 “A lot of people say it’s the best kept secret in New Canaan, because people don’t realize it’s there,” Benko said Tuesday from his second-floor office at Waveny House, overlooking that same balcony and sprawling fields below. “It’s a fun evening. You come out, you bring your picnic basket and your chair. It’s just a nice area. Kids run around the back, throw the Frisbee, play tag, everything else. Parents on a blanket socializing with friends. They listen to music. It’s just a nice three-hour family evening.”

Weather-permitting (these thunderstorms should have passed by Wednesday afternoon, the forecast says), the Recreation Department’s 2014 Waveny Summer Concert Series continues Wednesday night with a 7:30 p.m. performance from ‘60s and ‘70s rock group The Bookends Band. Here’s the full schedule. 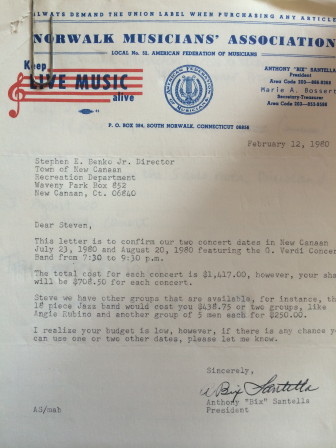 A February 1980 letter from the Norwalk Musicians Association to Recreation Director Steve Benko, confirming a performance during the inaugural Waveny Summer Concert Series by the G. Verdi Concert Band. The time of the concert always has been 7:30 to 9:30 p.m.

“Eventually as music changed, and sheet music and tapes and records gave way to the digital format, the Trust Fund kind of disappeared so we started going out and recruited sponsors from the community and we also put it in the town budget,” Benko recalled. “Now, where we used to run five or six, we run 12 or 13 concerts a year.”

As with many New Canaan community events and causes, locally owned businesses are a driver—in this case, they sponsor the concerts.

Steve Karl, vice president of stalwart sponsor Karl Chevrolet, said he has many fond memories of attending the concerts when his boys were young and makes it a point to get to a few concerts each year with family and friends. 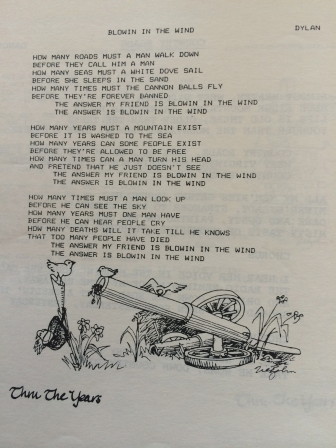 The program from one installment of the 1983 Waveny Summer Concert series, a sing-a-long collaboration between Jim Martin (music director) and Joe Ziegahn, Sr. (illustrations). Here’s “Blowin in the Wind.”

A favorite band that had played for years the local group “The Wingnuts,” Karl said.

“We specifically requested to sponsor them and the show would turn into a big party—dancing on the back deck, everyone singing along, and we would even throw out a couple hundred inflated beach balls that would bounce around and created a really fun atmosphere for the kids,” Karl recalled.

Karl Chevy has been a sponsor since the beginning, he said, along with Francos Wine Merchants and the New Canaan Advertiser. 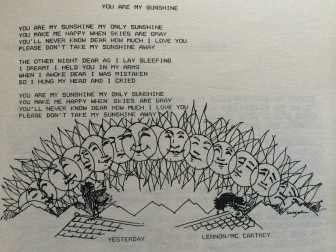 And here’s Joe Ziegahn, Sr.s’ illustration for “You Are My Sunshine,” a song picked for one installment of the 1983 Waveny Summer Concert series.

“It’s one of our town’s great traditions and both Steve Benko and Bill Kapp deserve credit for not only coordinating the events, but also for putting together such a nice variety of bands for folks to enjoy. Whether you enjoy classical, big band, rock, dance—there is something for everyone on the list.”

The longest-running band at the series is Gunsmoke, a country-and-western group out of Darien, Benko said. They’ve been playing here for more than 20 years. A list of all businesses that have sponsored concerts through the years reads like a “If Your’e Really From New Canaan You’d Know” Facebook group thread: Bob’s Sports, Gramophone Shop, Hoyt Funeral Home, Maples Inn, Whitney Shop, Pennyweights.

Andrea Mallozzi, marketing director of first-time concert series sponsor Fjord Fish Market & Catering, said the East Avenue business has known about the concerts from its staff living and doing business here, and “getting involved made perfect sense as a way to be more active in the community.” 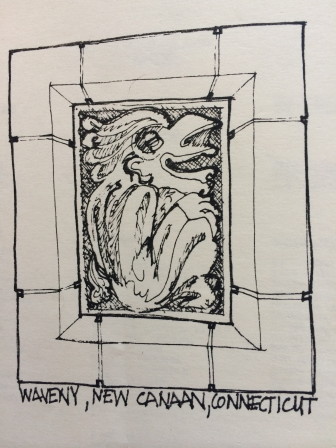 Joe Ziegahn Sr.’s back cover illustration for one installment of the 1983 Waveny Summer Concert Series plays off of the gargoyles.

“We are excited about our upcoming concert and I imagine that the Waveny Summer concerts are something we will continue to support in the future,” Mallozzi said.

Asked for a singular memory of the series in all these 34 years, Benko said a band called The Grandsons, a concert fixture from Washington, D.C., was playing one year when a storm “snuck in on us.”

“They just moved their snare drum, and one guy had a sax, and another guy had a rhythm guitar and they moved inside and people came inside and we probably just had about 100 people sitting on the floor and they played for about an hour,” Benko recalled.

Here’s a look at some of the bands that have played the Waveny Summer Concert Series through the years: