Police on Thursday received a report of a bobcat sighting up on Lukes Wood Road, prompting officials to wonder whether New Canaan has two or three of the animals living in town.

A New Canaan man spotted the bobcat through a window of his home, just on our side of the state line at about 8 a.m. on July 10, according to Animal Control Officer Maryann Kleinschmitt. 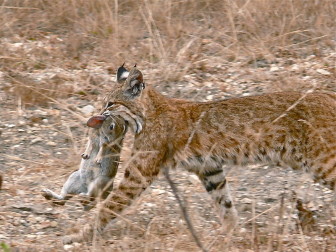 One bobcat regularly is spotted in that northernmost strip of New Canaan—typically near Ponus Ridge. Sightings also have been reported on the other side of Smith Ridge Road—in the area of North Wilton Road near the Wilton line—and down on Carter Street.

Given how widely the species typically ranges—the wildcats keep one main den and may have additional ones—the three areas in New Canaan are near to enough each other that the sightings may represent two separate bobcats or three, Kleinschmitt said.

“Do I have one staying just in the Lukes Wood and Country Club area, then another one on Carter Street and another up on Ponus Ridge?” Kleinschmitt said. “Every year, we have two or three sightings.”

New Canaan has had two different sightings in the Lukes Wood Road area in the last two years, and just twice in five years has anyone been able to photograph a bobcat in town, she said.

“If you are lucky enough to see one then you are lucky,” she said. “They’re very private animals and they don’t want to be seen. Usually they’re walking, sort of moseying.”

One resident photographed a bobcat running with something in its mouth, Kleinschmitt said—likely its prey, which may include cats as well as rabbits, rodents, turkeys or even deer.