Miyuki and Dante Mirafiore, Culinary Institute of America-trained chefs who have been married three years, long have dreamed of opening up their own eateries.

They’ve worked in kitchens in New York City, Connecticut and California, including a recent stint at Alice Waters’ landmark Chez Panisse in Berkeley.

Some months ago, the Mirafiores received a call about a place they’d never heard of—New Canaan—and a unique model for delivering high-quality food that they’d never considered.

“I love that it’s not a restaurant,” Dante Mirafiore said as he stood at the counter in front of his wood-fired pizza oven at Pine Street Concessions, grating Scamorza—an Italian cow’s milk cheese—into a bowl for his special New York-style pie. 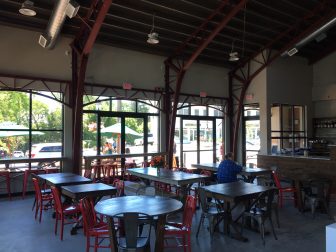 “It’s what you want to make it as a customer. You come in, buy a bottle of wine, bring it to the table, pour it yourself. You enjoy a nice meal with some chef-cooked food. Or you come in and get a bite to eat and take it wherever you want. It’s what you want to make of it. The customers will make Pine Street what it is. If they want food fast, we are going to have to make food fast. If they want to take it easy and relax, that’s what we’ll do.”

‘Dante’s Pizza’ is one of three permanent vendors that anchor the widely anticipated and spacious new gourmet food hall at 75 Pine St., opening Wednesday. His dedicated retail space and kitchen stands alongside—though completely separate from—the one that Miyuki Mirafiore has occupied for ‘Miyuki,’ an Asian noodle shop with an assortment of snacks. A third chef, Alyssa Kadow, has launched ‘Greens On The Go,’ a California-inspired eatery featuring fresh salads, nutrient-rich grain bowls and artisanal toasts.

“I think it’s fun and you can still produce excellent food out of a food court setting,” Miyuki Mirafiore said. 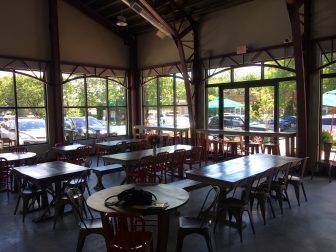 Brainchild of NCRC’s Peter Lane, Pine Street Concessions received approval from planning officials two years ago and has undergone an extensive interior fit-out since the three chefs signed on several months ago. It offers plenty of parking as well as ample seating, with a patio area outside and a comfortably laid out interior that’s naturally lit under a vaulted ceiling. In addition to the pizza, Asian street food and Kadow’s offerings, Pine Street Concessions includes a “seasonal food table” where smaller vendors will be welcome to sell their homemade and fresh-grown products.

“We’re thrilled to have a new addition to the food scene on Pine, and they’re bringing something new and fresh,” said Tucker Murphy, executive director of the New Canaan Chamber of Commerce.

Kadow and her staff of five soft-opened Friday and “it’s been super busy and awesome,” she said. 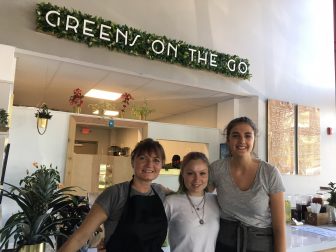 “I’m feeling good. Somehow we are doing it—we are getting 15 hours a day in. I’ve got a good team. That’s the main thing. These girls keep it going, keep it fun.”

The feedback from New Canaanites who have visited Greens On The Go has been overwhelmingly positive, Kadow said.

“They say that they’ve been waiting for this,” she said. “It’s a casual environment and I think that they like that, also. Just fresh and easy and homemade.”

Everything is made from scratch at Greens On The Go, including the dressings and croutons, Kadow said. 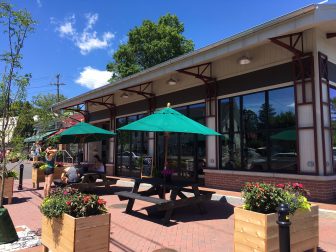 Asked why New Canaan was the right place to set up her first direct-to-customer food service space—Kadow had built a catering kitchen and ran a successful business out of it for years—she said: “I feel like people here really have a healthy lifestyle. It’s true. That is why I’m closed on Sundays. I will have my chips and dip. Monday through Friday, people just like to keep it healthy. It’s food that doesn’t make you feel bad. You feel good when you eat this food.”

She offers a broad selection of salads—including the “Falldorf,” with greens, roast butternut, toasted pecans, apple, celery, gorgonzola and Waldorf dressing—bowls, toasts and homemade guacamole with baked tortilla chips and sliced vegetables. Greens On The Go also has numerous vegetarian and vegan options, as well as gluten-free, and Kadow said that on Tuesdays and Fridays, she’ll have California-style baja fish tacos and a vegetarian option with black bean tacos with queso (or just black bean for vegans).

Miyuki Mirafiore, who is half-Japanese, said her main food will be noodles, though she also will offer additional snacks as noodle shops do in Japan. Those will include healthy salads, steam buns, banh mis and little bites such as wings.

Miyuki will offer customers beer and wine, as well—so will Dante’s Pizza “next door.”

He described his pizza as “thin crust,” adding sagely: “In my opinion it’s thin crust but everybody has their own opinion.”

He’ll cook 14-inch pies, with a usual slew of items for customers to add, and offer seven or eight “specialty pies” such as The Picante, with tomato sauce, oregano, provolone, spicy Italian sausage, red peppers and onions.

On the eve of opening to the public, the Mirafiores each said they are “excited.”

“It’s tricky,” Dante Mirafiore said of opening his own business. “You learn something every day. But it’s exciting because it’s something you’ve never done before. Every day brings something new.”