Town officials last week approved a $10,000 contract with a Norwalk-based company to improve the pedestrian access areas at the heavily used colonnade in Mead Park. 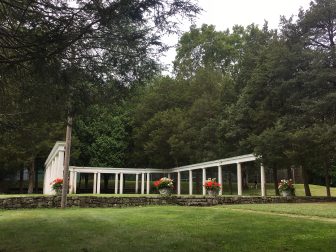 A WPA project that originally had been a wading pool and was converted into a “victory garden” following World War II, the grassy colonnade area hosts community events such as the cherry blossom festival, an annual breakfast hosted by the New Canaan Beautification League and junior prom photo gatherings.

At its regular meeting Tuesday, the Board of Selectmen approved a contract with Nature’s Way Landscape Associates of Norwalk to rebuild the cheek walls, steps and walkway there.

Public Works Director Tiger Mann said New Canaan-based Keith Simpson Associates, a prominent landscape architecture firm, provided a “nice plan for work” at the colonnade that include four separate items. As of now, the town only has the funds to complete two of those four things, Mann said.

Nature’s Way Landscape “are ones that are doing the work at Waveny right now and they are doing a very good job,” Mann said at the meeting, held in Town Hall.

Williams asked what the other two projects on the to-do list are.

Mann said one is “to place a small concrete box around the bottom of every pillar to sort of finish off each pillar” and to remove stones and grass from around the colonnade and install a patio at the back.

“We’re hoping for more seating—not just for tennis players but overflow seating from the [Mead Park] Lodge,” Mann said. “We are exceeding capacity. Everyone seems to like what Emad [Aziz] is doing at the Apple Cart Food Company.”

Parks officials for two years have discussed ways to spruce it up so that the colonnade offers more uses, and last year the town approved funds to clean up and paint the marble columns.