Officials on Tuesday appointed the town’s longtime parks superintendent to serve as interim director of parks and recreation. 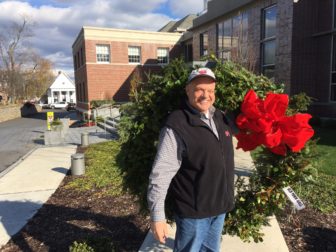 John Howe has been with the town for about 24 years and is “one of many employees who worked very closely with Steve Benko over the last many years,” New Canaan Human Resources Director Cheryl Pickering Jones told members of the Board of Selectmen at their regular meeting, held in Town Hall and via videoconference.

“And what we are trying to do is fill Steve Benko’s shoes, which as everyone knows is not going to be an easy task,” Pickering Jones said. “What John is going to do is, as he becomes interim, is research the department. We are looking at how area towns are doing it and come up with some suggestions. So our first move is to make him interim and then we will hear from him as to other recommendations.”

Benko, a 50-year employee of the town who worked as recreation director sine 1979, died Feb. 12 following a brief battle with cancer.

“There are big shoes, obviously, to fill,” she said. “I trust you have your own big shoes and will make a very important difference, so thank you for doing so.” 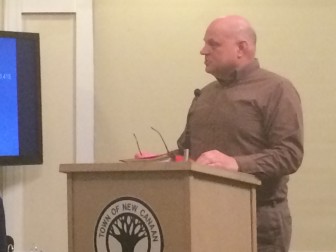 John Howe, superintendent of parks for the New Canaan Department of Public Works during budget discussions in 2014. Credit: Michael Dinan

Knowledgeable and responsive, Howe during his long career with the town has earned wide respect from the community’s youth sports organizations, school district and parents, as well as colleagues in the several municipal departments that intersect with the public parks.

Howe appears regularly before the Board of Selectmen in making funding requests within the Parks section of the Department of Public Works, provides details of proposed spending plans during budget season, fielding questions from the Board of finance and Town Council, and gives regular updates to the Parks & Recreation Commission at the appointed body’s monthly meetings. He’s been out front during some of the most widely discussed matters before the community with respect to parks, such as the playability of sports fields, thoughtful use of pesticides and problems with litter, often with an eye on the budget impacts of proposed changes, such as for additional garbage receptacles due to those discarding used dog waste bags along trails at Waveny. 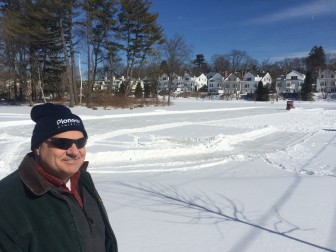 Parks Superintendent John Howe is overseeing the clearing of snow from Mead Pond on Feb. 18, 2015—it’ll be the first time in six years that we’ve had ice skating on the pond. Lights will illuminate the ice through 10 p.m. Credit: Michael Dinan

A longtime member of an administrative team known as the “Fields Committee” with Benko and New Canaan High School Athletic Director Jay Egan, Howe also often earns praise from nonprofit organizations that make use of the public parks for special events.

He earned a degree in turf management from the Stockbridge School of Agriculture at the University of Massachusetts, and holds four supervisory pesticide licenses in the state of Connecticut (though he needs only one for the fields). Howe has served as president of Connecticut Parks Association, vide present of the New England Park Association and as a member of the national and New England Sports Turf Managers Associations, in addition to further continuing education. 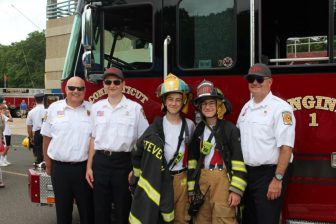 Howe serves as chief of the Stevenson Volunteer Fire Company in Monroe, and in New Canaan has for many years quietly performed the important duty of lowering U.S. flags to half-staff at the direction of the president or governor.

In the past, the jobs of parks superintendent and recreation director have been separate, and the interim position Howe is assuming would combine those roles in some ways. The town’s organizational structure and reporting lines are to be vetted and decided during the interim period, Pickering Jones said.

Howe said during the meeting that he was looking forward to the new role.

“I think it will be a good change for the town, having one voice coming out of both parks and recreation,” he said. “A big challenge, but I’m looking forward to it.”

2 thoughts on “‘A Big Challenge, But I’m Looking Forward To It’: Town Appoints John Howe as Interim Parks & Rec Director”