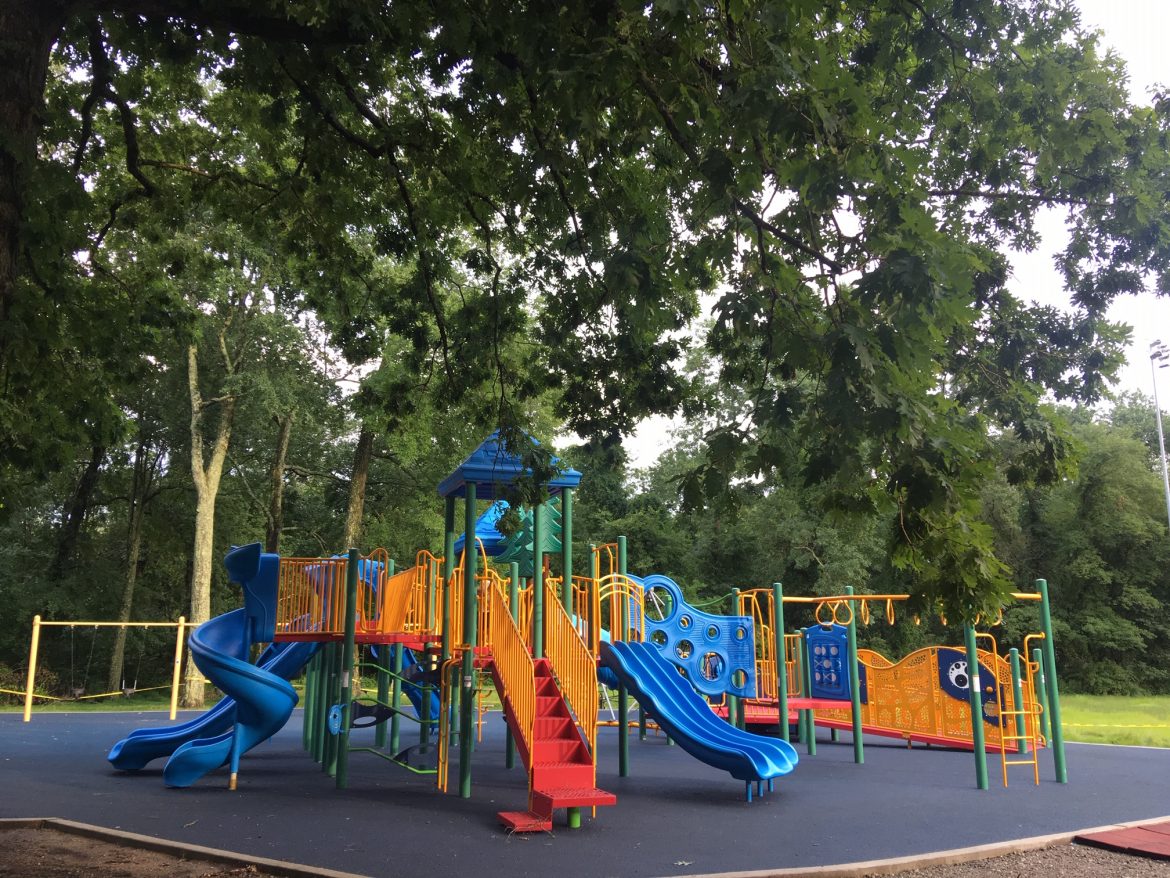 Town officials are urging Mead Park visitors to remove their trash from a newly installed playground area that came to be as a result of a successful public-private partnership. 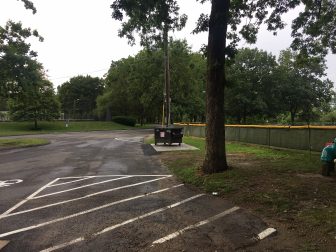 Here’s the dumpster that Mead Park Playground visitors are encouraged to use to dispose of their trash. Credit: Michael Dinan

New Canaan is proud of the new playground and those that raised funds to help pay for the project, “and so I guess for me it’s just a public request, too: Whatever you take in, make sure you take it out, just like camping,” Parks & Recreation Chair Rona Siegel said during the appointed body’s regular meeting, held July 10 at Town Hall.

“And there are trash cans near the concessions, near the driving area,” Siegel said.

A collaboration between the town and Friends of Mead Park Playground–a private effort overseen by two New Canaan women that saw more than $200,000 raised thanks to scores of individual donors as well as generous local businesses and nonprofit organizations—the remade play area replaces aging, deteriorating equipment and includes a “poured-in-place” rubberized surface.

After some weather-related delays, the playground was finished and ready for use prior to the Fourth of July, though almost immediately trash began collecting in the area.

Parks Commissioner Jack Hawkins asked whether trash cans had been installed around the playground area itself. Told that they had not, he said, “Can we discuss tat and can we get some down there? I think having a trashcan available down there will help prevent littering.”

John Howe, superintendent of parks with the New Canaan Department of Public Works, said that before the town moved to a “carry in-carry out” policy, “we had much more garbage blowing around.”

“Blowing around the trash cans, anything from squirrels getting inside and chewing their way out, to ‘Well it’s close enough, it’s near the trash can,’ ” Howe said.

Told that a dumpster sits near the pathway that leads to the playground, Hawkins said, “I don’t know that a lot fo people want to lift the lid of a dumpster if they have trash.”

Howe said that carry in-carry out has been the town’s policy since 2008.

“We put the dumpsters in so they really don’t have to go back and put it in their car,” Howe said. “But when we had trash cans don there, there were four trashcans around the play area, and there was a lot more garbage than there is today.”

Commissioner Francesca Segalas said Mead Park is unique in that some visitors go there specifically to get food at the Apple Cart.

“I think maybe when the picnic area is established alongside the side of the pathway, we ought to revisit this,” she said. “There should be a trash can in the picnic area, in my opinion.”

Howe noted that installing trash cans has “some budget implications.”

“The reason we went to carry in-carry out, besides that it works, is the amount of money spent picking up garbage is a substantial amount of money,” Howe said. “And my biggest fear is we put a trash can there and everybody says, ‘Oh, it’s just one trash can, no big deal.’ But then now we need one at Mellick, Gamble, Waveny.”

“Even when we are fully staffed, we do not have enough time to be picking up garage without something else giving,” Howe said. “So when we cut it out of the budget, we cut out a substantial amount of overtime.”

Siegel said it’s reasonable to ask park visitors to change their habits in terms of bringing their trash back out of the playground area to the dumpsters.

“I’m happy to revisit, but I think people have to take responsibility,” Siegel said. “It’s a beautiful brand new baseball turf field and it’s a beautiful new playground with the stone path about to be installed, so I’m happy to revisit but the point is we have to ask the public to carry in-carry out. Enjoy the facility, love to live in this great town—but take some responsibility.”

One thought on “‘Take Some Responsibility’: Officials Urge Mead Park Playground Visitors To Carry Trash Back Out”