The Roger Sherman Inn has been a landmark in New Canaan since its construction in the 18th Century. 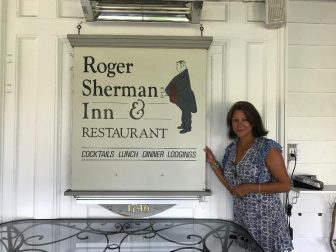 Following public debate over its planned sale and redevelopment in December of 2016—an effort that eventually stalled—the business’s owners have seen locals rally behind the restaurant and inn during the past 18 months.

Now, owner Nes Jaffre said, she’s focused on breathing new life into the business, with a new and popular chef already hired and $160,000 in renovations planned for this year.

“We’re changing all of this,” Jaffre told NewCanaanite.com on a recent morning from the inn’s dining room. “We’re changing the look of this nice, but old and tired antique inn.” 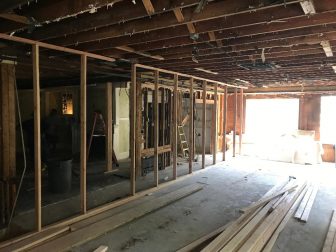 One of the dining rooms being worked on. Credit: Catherine Gorey

Plans include $160,000 in interior renovations. The town on July 19 issued a building permit to remove walls, convert three current dining rooms into one space for banquet use and install new French doors to an outdoor deck while extending the porch.

Jaffre says the changes are designed to help attract more interest for events such as weddings.

“Our sole purpose of this is to be able to seat up to 220 people in one room, which is really necessary for larger scale occasions,” she said.

One of the dining rooms being worked on. Credit: Catherine Gorey

The remodeling is timely, as another popular large-scale venue in town, the Country Club of New Canaan, recently came offline for a major renovation.

According to Jaffre, the hiring of “Iron Chef” competitor and Forbes magazine-featured chef, Francois Kwaku-Dongo also is central to the Roger Sherman’s business strategy.

“Our new chef is all about catering,” Jaffre said.

The changes come after a whirlwind year for the Roger Sherman Inn, after a plan for its sale and development of the land into a cluster of townhouses fell through.

“It’s been a very stressful and exhausting year, with a lot of work,” Jaffre said. “We’ve been trying to recover from a pretty big disaster of the purchaser backing out, he announced to the papers that he definitely bought the inn so he damaged our business.”

Still, all the new work and renovations are worth it for Jaffre.

“The town loves the Roger Sherman Inn. It’s a landmark, it represents New Canaan,” she said. “It’s really important to the community that we survive.”

3 thoughts on “‘A Very Stressful and Exhausting Year’: Roger Sherman Remakes Itself with New Plans for Interior and Business”