“The people in this place have agreed, many of them, to set up a library and are collecting money to make a small purchase of books.” —from a Jan. 16, 1790 letter from the Rev. Justus Mitchell of New Canaan to Roger Sherman, his wife’s uncle

Perhaps no commercial enterprise in New Canaan has garnered as much attention in recent months as the Roger Sherman Inn. 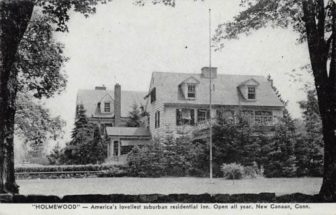 The Roger Sherman Inn during its years as the Holmewood Inn.

Since hitting the market at $6 million three summers ago, the Oenoke Ridge Road restaurant and inn has been the subject of wide speculation. After lingering on the market for years, a well-known developer materialized last fall as the property’s “contract purchaser,” with a plan to create eight (later modified to six) homes on a 1.8-acre property that, as-of-right, would have just one.

While the Planning & Zoning Commission weighed the merits of that plan, the owners of the property and business announced that the Roger Sherman itself would close in January. That final date got pushed back more than once as the hopeful developer re-filed new plans, until P&Z finally denied the application last week.

No one knows what will happen now with the Roger Sherman Inn or the developer’s plans for it.

Yet in the course of the P&Z hearings, dozens of residents spoke out at the public meetings and through letters to the town planner.

Some backed the developer’s proposal, calling the Roger Sherman Inn an unwelcome business in a residential zone. Others viewed it as a stately holdout from New Canaan’s great era of the inns, when in the early- to mid-19th Century the town served as a popular summer destination for New Yorkers seeking fresh air, peace and quiet. Still others lamented the prospect of New Canaan losing its very last B&B-like option for visitors. Regular diners spoke glowingly of the restaurant’s table service and dinner fare, while preservationists pointed to what they called a precedent-setting allowance built into the developer’s proposal that would’ve altered the community’s historic character, density and scale.

And, according to local historians, an early version of New Canaan’s first library should be added to it.

What’s been known since 1960 as the ‘Roger Sherman Inn’ began its life as a small structure that served as the residence of the fourth minister of the Congregational Church, according to local history.

Justus Mitchell was 29 years old and had served sporadically as pastor of a Congregational church in Ridgefield when he was installed in 1783 as minister of the church at God’s Acre in Canaan Parish. At that point Mitchell had been married four years to Martha “Patty” Sherman of Woodbridge, daughter of a Milford pastor and niece of Roger Sherman, the man who would sign the Declaration of Independence for Connecticut and become one of the state’s first senators.

Mitchell himself would leave an indelible mark on the town, though no one ever described his appearance and no portrait of the minister survives, according to town historian Mary Louise King, author of “Portrait of New Canaan,” published by the New Canaan Historical Society.

At the time of his sudden death, 23 years after arriving in New Canaan, Mitchell was remembered as “the beloved Pastor,” according to King, “whose sorrowing parishioners planted a weeping willow beside his tomb on God’s Acre.”

“Yet the Rev. Justus Mitchell not only was a well-known clergyman,” she writes. “He was the founder of Canaan Parish’s first private school and first library, and he was called ‘the brains’ behind the incorporation of New Canaan.”

The story behind the “library” would involve Sherman himself.

But first, Mitchell had to build his house. On starting as minister here, Mitchell purchased 22 acres on ‘Haynes Ridge’ (today’s Oenoke Ridge) for165 English pounds from Stephen Hanford and set about building the home where he would live out the rest of his life.

The original structure stands today (it was to be picked up, moved closer to Oenoke Ridge Road and restored as part of the developer’s most recent, rejected plan).

It appears to have served the Mitchell family well.

Sherman’s niece, Martha, the pastor’s wife is said—in an article by Janette Shea and Stefan Zur, published in the Historical Society’s 1982 annual—to “have had both the time, and the means to be ‘dressy,’ a characteristic that the other women of the church are said to have resented a little.”

“She liked to sit afternoons with a bit of handiwork, the story goes, at a window which gave her an unobstructed view of the road from town and permitted her to change dresses quickly when she saw a probably visitor approaching,” according to Shea and Zur. “But she also was considered ‘intellectual,’ which no doubt came in handy when her husband, the same year he began his ministry in the church on God’s Acre, opened a private boarding school in their home.”

And a good one.

According to King, the school—located on acreage that Mitchell would acquire on the opposite (west) side of Oenoke—was established specifically to prepare young men for Yale College.

By the 1790s, Mitchell’s charges were going off to Yale and those young men went on to become lawyers, ministers, judges and, in the case of Roger Sherman Baldwin, governor of Connecticut (in 1844).

Mitchell also created New Canaan’s first library—a development that historians trace, in part, to a set of three letters exchanged between Mitchell and his uncle by marriage, Roger Sherman, during the winter of 1790 (they’re kept at the Library of Congress).

“The older man was by now a member of the House of Representatives and, since New York was the capital of the country, he was in the city attending the current House sessions,” according to Shea and Zur.

Mitchell, in a Jan. 16 letter, wrote: “The people in this place have agreed many of them to set up a library and are collecting money to make a small purchase of books.”

The young minister also asked whether books were cheaper in New Haven or New York and for a list of titles, according to King.

“The Senator replied on Feb. 8 that New York book dealers would sell as low as they could but would not give any ‘abatement’ to the Canaan Parish purchasers,” King wrote. “Mitchell reported in March that ‘We have sent for [books] and are to be received this week,’ adding that several gentlemen wanted books about the Revolution and would Sherman advise them on the best titles to buy.”

A library composed of about 100 titles was established in Mitchell’s home, King wrote, those books “to be borrowed only by the ‘gentlemen’ contributors.”

“That the Canaan Parish ladies in the late 18th Century also bought and read books can be proved by surviving orders, account books and correspondence,” she wrote.

Following Mitchell’s death, the boarding school on the ridge was discontinued—however, the books collected in the house in 1811 were referred to as the “Young People’s Library of New Canaan,” according to Shea and Zur, and “could well be those that Justus Mitchell was waiting for in 1790.”

The Rev. William Bonney, Mitchell’s successor at the Congregational Church, purchased the home in 1809, and it would be owned by three more times until 1836, when Dr. Lewis Richards purchased and lived in it for 30 years.

By 1925, four owners later, by which time J. Herbert and Louise Stevenson Tebbetts had come into possession of the home, it had been expanded with additional rooms and a wraparound porch. That year, the Tebbettses opened the Holmewood Inn (which doubled as a school). The “Holmewood Junior School” operated for about two or three years, according to Shea and Zur, and by the spring of 1944 J. Herbert Tebbets had died. Louise would die two years later and in 1946 the inn was purchased by John D. Shea.

Shea had served with the U.S. Army in the Pacific theater during World War II, and had gone on to graduate from the Cornell School of Hotel Administration. He operated the inn for 14 years until, in the spring of 1960, it was purchased by Roger Sherman Ross of Upper Montclair, N.J.—a country club manager in the Garden State—and he changed its name to the ‘Roger Sherman Inn.’

Shea and Zur write: “Ross’s arrival on the scene marks the beginning of a new era for the inn, when the emphasis shifted toward food. With ‘gourmet dining’ more and more popular, there was an effort to make the Roger Sherman a place that would appeal to the chic, fashionable set of Fairfield County—the Connecticut version of ‘The Beautiful People.’ ”