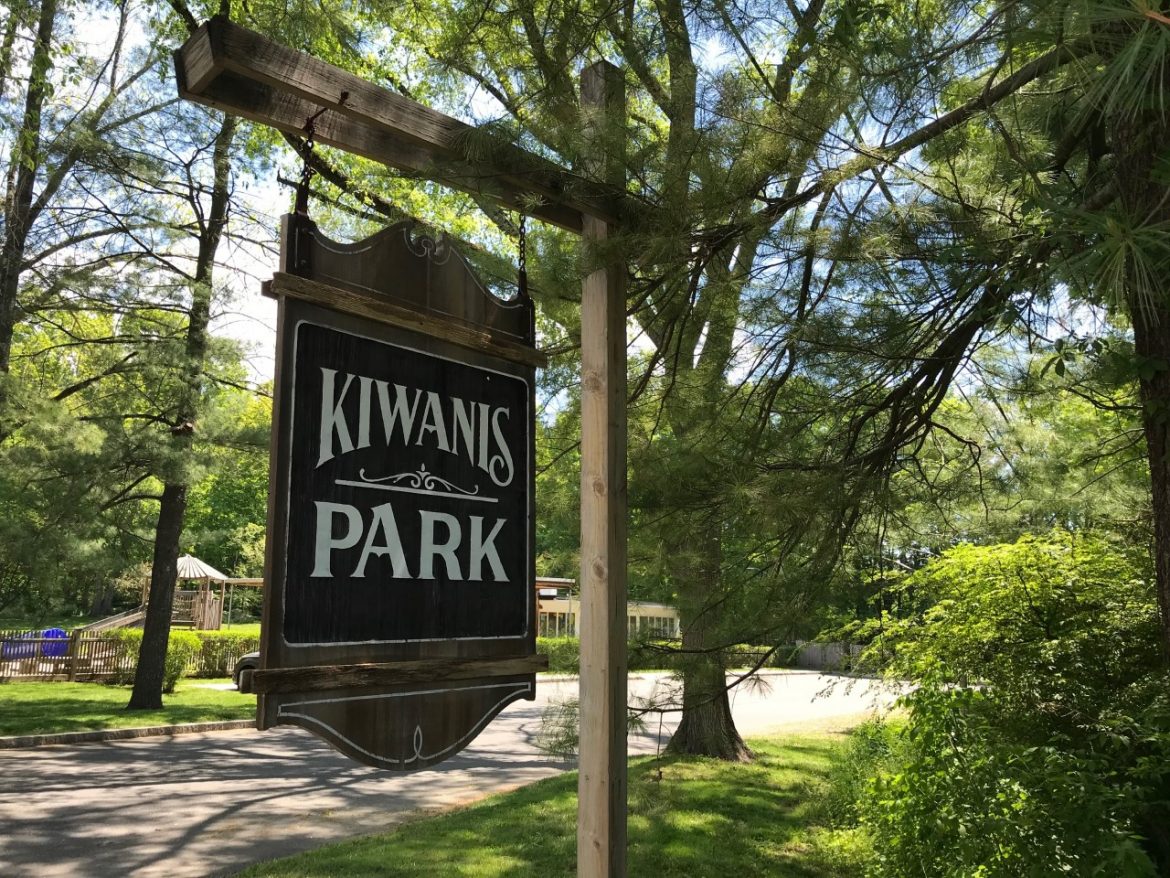 Parks officials last week voted 8-1 to repaint the sign at the entrance of Kiwanis Park on Old Norwalk Road.

Recreation Director Steve Benko and Public Works Director Tiger Mann proposed retaining the brown post and frame of the sign while changing its inset to the same blue as a sign by Kiwanis Park’s swimming hole, and going over its lettering with white reflective paint.

Commissioner Francesca Segalas—whose house is located 433 feet from the entrance to Kiwanis, according to Google Maps—led a 23-minute discussion about the sign.

She opposed the change.

“I know that every one of our park signs are brown with white writing and the Kiwanis sign, when we talked about it popping, we talked about just reflective white paint going where the writing is,” Segalas said. “I don’t think it’s necessary to change the color. The problem is the neighbor on the east side, their trees are low so that you can’t see the sign whether it’s going to be blue or brown. But I don’t think changing the consistency of our signs in town makes sense.”

Mann responded that the sign itself is different from others at the parks in that it’s wooden and not laminate, and that the others “don’t pop at night” because they don’t have reflective paint.

“We thought it was probably the nicest way to kind of show that Kiwanis was there without the expense of bringing lighting out, which would be difficult at best,” Mann said.

“We were just trying our best to make it a little bit more prominent,” he said.

“It’s paint,” Granito said. “It’s easy to fix and it’s not that expensive.”

Green also spoke in favor of trying an update to the sign.

“With all due respect, I am not sure that consistency really matters to most of the people who use the parks, and I thought the idea of trying the royal blue was a really good idea,” Green said. “As Tiger and Steve have said, if it doesn’t work out, fine, it can be reversed but I think that the idea just is a signal that things are changing at Kiwanis Park and it might be a fun place to go.”

Segalas at one point asked whether it would be possible to leave the color scheme as-is while using reflective paint.

Mann said that is the plan, along with the interior part of the sign being painted blue.

Segalas said the fact that the Kiwanis sign is unique in that it’s made of wood doesn’t mean it’s substantially different from others located at town parks.

“The thing is, that all the signs, whether they are made of different materials or not, that I think is less relevant because passersby can’t tell,” she said. “But Dixon Park, Waveny Park, Irwin Park, all of them have the brown with the white lettering.”

Mann said that while he appreciates the continuity in style, the Kiwanis Park sign itself is “completely different” from others already.

“This sign is nowhere near the other signs for Waveny, Dixon, Mead,” he said. “It’s a beautiful sign.”