All New Canaan Police officers on patrol will be wearing body cameras within about two weeks, following a trial run of several months with one of the department’s seasoned officers, the chief said. 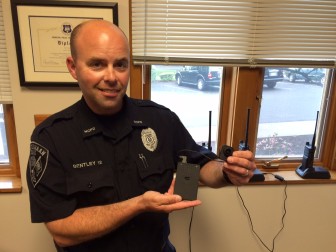 Designed to help officers do their jobs and to show, if not ensure, that officers are carrying out duties appropriately, the FirstVu-brand body cameras are being purchased with donations as well as state funds and through the regular budget process, officials say.

“From beginning to end, they will show exactly what happened and what was said and done,” Police Chief Leon Krolikowski said. “I have great faith in our officers, that they make the right decisions, and these [body cameras] are out there for the best interests of everyone.”

New Canaan ranks among the first municipalities in the area to introduce the technology, the chief said.

He continued: “There have been situations that have come up that I am sure every officer wishes they had a recording device. I was in one of those situations—it was resolved through an investigation—and there was a time earlier this year where I did have a recording device, and which worked out really well.”

Officers can record back 30 seconds by hitting a button on the device, and citizens can see very clearly that it’s on, Bentley said. The tone of those interacting with police—during motor vehicle stops, for example—often changes immediately from what can sometimes be an agitated or abrasive level when they understand they’re being recorded, he said.

Krolikowski said there are situations such as medical calls where privacy issues are at stake and the recorders will not be used. They will be used routinely in other types of incidents, such as domestic calls, he said. The department and Police Commission are in the process of finalizing a policy regarding the use of body cameras, the chief said.

“It just makes sense” to have them, Krolikowski said. “I think everyone, both officers and the public, should realize that they are recorded many times a day and they have no idea how many times a day they’re recorded. It’s nothing to be concerned about, in my opinion, and we just want to properly document each interaction.”