Wednesday morning’s Board of Selectmen meeting—typically a workmanlike affair, with approvals of tree removal contracts and reviews of how the pavement is faring on local roads—saw multiple department heads offering heartfelt thanks to the three town officials gathered at the dais for the final time. 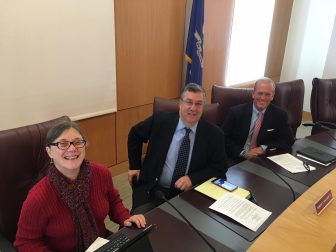 L-R: Selectman Beth Jones, First Selectman Rob Mallozzi and Selectman Nick Williams at their final meeting as a Board of Selectmen after six years together. On Nov. 8, 2017. Credit: Michael Dinan

This week’s election signaled the end of the board composed for six years of First Selectman Rob Mallozzi and Selectmen Beth Jones and Nick Williams.

“Yours was my fourth administration and for the past six years, I have found your board to be the most collegial, congenial and decent one yet,” Public Works Director Tiger Mann said after the selectmen approved the purchase of a pickup truck from Karl Chevrolet. “Things won’t be the same. It has been a pleasure.”

During the meeting, held at Town Hall, Human Resources Director Cheryl Pickering-Jones thanked the board for “a great few years” and Parks Superintendent John Howe said, “Thank you for six years of wonderful cooperation.”

Jones and Mallozzi did not seek re-election, he after a narrow loss at the Republican caucus in July. Williams earned 3,827 votes on Tuesday and will join Kevin Moynihan and Kit Devereaux on a newly configured board, as first selectman and selectman, respectively.

Mallozzi, Jones and Williams had kind words for the department heads.

“It goes without saying: I look over at the DPW guys and it’s fair to say that they make or break a first selectman,” Mallozzi told Mann. “It’s that critical. And the way you have taken care of downtown, the way you have taken care of the parks, our schools and those facilities, our sidewalks. The way that you folks and you, in particular, have been as responsive as any group in town, has lessened the burden on this first selectman to the degree that I just don’t get the calls. And I never asked you to do it. You just did it.”

Referring to Recreation Director Steve Benko, Howe and Highway Superintendent Mose Saccary, he added: “It’s like Mr. Benko here does it. And Johnny and Mosey. I could not ask for a better team, ever.”

Williams, as the meeting wound down through the final three items on its boilerplate agenda—legal bills, tax overpayments and contracts less than $5,000—stopped Mallozzi from formally ending the meeting and said: “Before we adjourn, I just want to say it has been an honor and distinct pleasure to work with both of you for these past six years.”

He continued: “Tiger mentioned collegiality. I trust that’s a good thing. I think that it is … It has just been a real pleasure. I cannot imagine getting any better and hopefully we will have a board going forward that has the same level of trust and respect. Thank you, each of you, for making my life so much better.”

Jones thanked her colleagues and thanked Williams for “carrying on the torch and showing them how to do it right.”

Describing the board members as members of the TV generation, Mallozzi said, “I always think about that Carol Burnett line, ‘I’m so glad we had this time together.’ ”

“Because I really am so glad we got to spend this time together,” he continued, growing tearful. “It was an amazing, amazing six years and I just look back at how close our families are, and how close we are and it’s just been absoultely the best six years of my life. So thank you so much.”

4 thoughts on “‘An Amazing, Amazing Six Years’: Emotional Farewell for Board of Selectmen at Final Meeting”