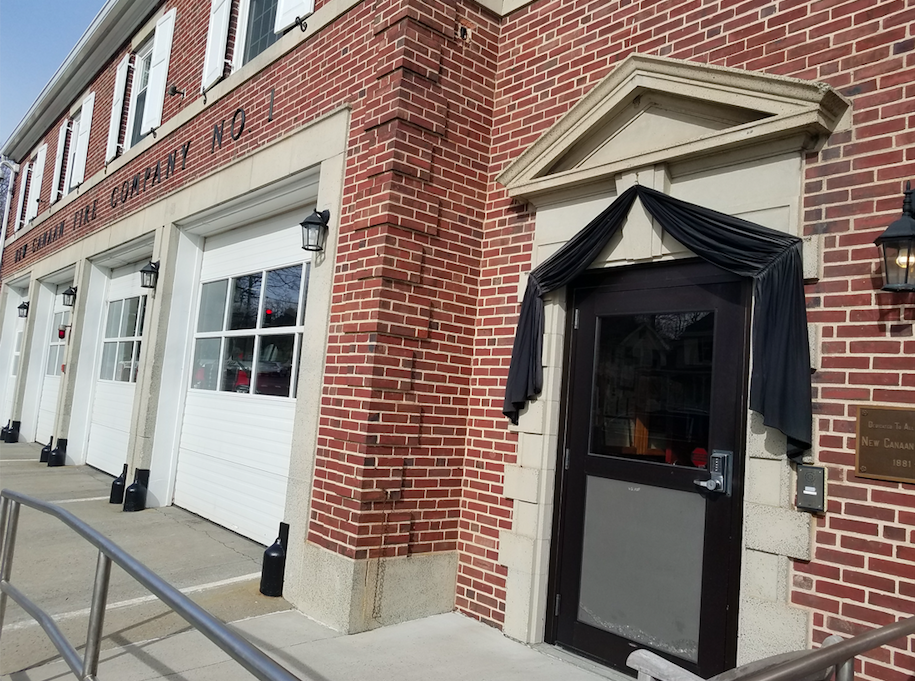 There is black bunting hanging over the front door of the firehouse in honor of Jim Cole. Courtesy of NCFD

Saddened by news of Jim Cole’s passing this week, New Canaanites are remembering the longtime former resident as a dedicated volunteer who served the community quietly and in numerous ways while helping to shape emergency preparedness in town. 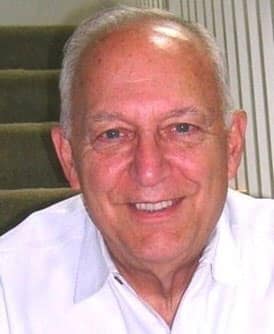 A former chairman of the New Canaan Police and Fire Commissions who went on to become the town’s director and later deputy director of Emergency Management and served on its Traffic Calming Work Group, Cole died Monday in Florida, according to First Selectman Kevin Moynihan.

In calling for a moment of silence at a regular meeting of the Board of Finance on Tuesday night, Moynihan called Cole “a great friend of New Canaan” and “great volunteer” alongside his wife, Nancy Upton.

Known for his deep involvement in the Congregational Church of New Canaan, local service organizations and the Community Emergency Response Team, a volunteer group known as ‘CERT,’ Cole was a widely respected expert on emergency response for whom the safety of the community was imperative, according to those who knew him.

He not only helped plan for emergencies but also rolled up his sleeves to work hard when they struck, according to Mike Handler, New Canaan’s director of emergency management. Handler called Cole “a remarkable guy” who “took community engagement and involvement to a different level” not only as a volunteer but also as a great recruiter who was “fiercely loyal” to those who gave of their time as he did.

“He was really an unsung hero,” he told NewCanaanite.com. “He loved more than just the high-level discussions, he loved getting involved in the details. As the ‘grandfather’ or ‘architect’ of New Canaan CERT, Jim had the responsibility to present to the community and to local and state politicians. Yet at the same time, Jim was the guy standing outside in the rain protecting his neighbors from downed electrical wires. He was invaluable in terms of understanding our community and he made work fun. There was never anything I ever asked of him that was not done professionally.”

“Jim Cole was a man with a strong personal commitment for public safety,” Hennessey said, adding that “it was a pleasure working with him over the years” in various capacities.

The door to the New Canaan Fire House on Main Street on Wednesday was draped in black bunting in honor of Cole.

“He had no trouble making critical decisions,” Hennessey said.

And although those decisions or Cole’s point of view on a specific matter may not have been universally popular, Handler said, he was always respected for his ability to hear out others and explain his own position.

“He was not a ‘yes’ person, he was not feeding you what you wanted to hear,” Handler said. “He was telling you what his experience and knowledge said was the right thing. I saw people not always agreeing with him, but understanding why he did what he did, and that’s a rare quality.”

Police Chief Leon Krolikowski said New Canaanites benefitted in countless ways from Cole’s decision, after working for decades in the corporate world, to volunteer in a town he loved.

“However, what was unique about Jim was his spirit of volunteerism, his passion for helping others, and the many, thousands of hours he volunteered in a variety of roles,” Krolikowski said, noting that among other roles, Cole was director of the New Canaan Emergency Operations Center and “never hesitated to help.”

“We are all quite lucky to have known Jim, and his legacy of volunteerism will live on as others serve in the roles he so loved,” Krolikowski said. “Jim was, and is, what makes New Canaan unique and special. The entire New Canaan community should say a prayer for Jim and his family.”

Former First Selectman Rob Mallozzi, a volunteer firefighter in New Canaan, said Cole from about 2002 on was “the power behind the throne,” providing wise counsel to First Selectmen Judy Neville, Jeb Walker and himself.

He “elevated all of our emergency services,” Mallozzi said, “as a huge community builder with his major contributions to the Congregational Church and Rotary and Exchange Clubs.”

“I can’t say enough about the overt and covert impact he had on this town,” Mallozzi said.

Lifelong resident Steve Karl called Cole a tireless volunteer who served in New Canaan for decades and whose “passion for making us all more prepared by leading us through numerous public safety initiatives is a major component of his legacy.”

“Those of us who were fortunate enough to work with him will remember his collaborative nature, his sense of humor, and most of all his constant smile,” said Karl, who serves on the Town Council. “Whether you saw him at the scene of an accident, attending a local fundraiser or meeting, or having a cup of coffee at Zumbach’s, his calm demeanor and outstretched hand was always there to greet you.  New Canaan has lost one of our own, but what we have gained from Jim’s contributions will be felt for years to come.”

NewCanaanite.com will update this article with information on services once details are available.