After months of renovation work that has coincided with full-scale rebranding and capital raise, Green & Tonic is on track to open next week on Burtis Avenue in downtown New Canaan. 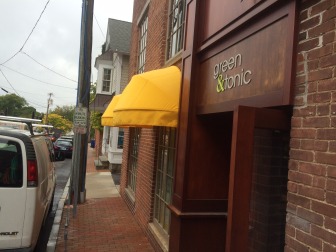 The purveyor of cold-pressed juices and plant-based foods will undergo a health inspection today, according to Jeffrey Pandolfino—a Greenwich resident and food veteran who owns the business with his wife, Cai—and a few days later hopes to welcome New Canaanites into the new store that also offers smoothies, teas and a variety of breakfast foods, snacks, salads, soups and wraps.

“We are super excited to get to New Canaan and the one thing I would say to the people of New Canaan is that I’m sorry it has taken a year to get the store built,” Pandolfino said.

The interior work at the shop—the first door on the right as you come down Burtis, formerly an antiques store—has been going on in conjunction with a store design update and rebranding of G&T packaging, logo and labels, he said. “It’s definitely Green & Tonic version 2.0 and we’re excited about that.” 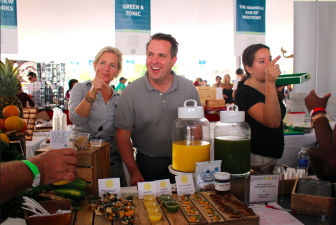 Formerly the owners of an all-natural foods catering business that they sold in 2008, Jeffrey and Cai Pandolfino soon began angling toward what would become Green & Tonic (with storefronts in Greenwich and Darien as well as a Westchester presence) by starting as a cleansing business that has evolved to include food that’s designed to “fuel the active lifestyle,” Jeffrey Pandolfino said, “whether grabbing side salads and using them as a base for dinner, or prepackaged for launch, we work really hard to be a food company, a health casual company that happens to serve a lot of beverages.”

He continued: “Everything in the store is plant-based, so if you want to call it vegan you could but we prefer to say ‘plant-based’ and that doesn’t mean we are necessarily vegans or advocate a 100 percent vegan lifestyle. Our feeling is we should gravitate to a diet that starts and stops with fruits and vegetables, and meat if anything should be a garnish to the plate and not the main course.”

Though Green & Tonic’s offerings are not USDA-certified organic, “95 percent of what we bring into the store is organic,” he said, including fruits and vegetables and items such as quinoa.

The store’s philosophy and products are a good fit for New Canaan, Pandolfino said.

“It’s a really nice town, the people seem wonderful and very welcoming, and they’re health conscious and into eating right and taking care of themselves both mentally and physically, and understanding the role that food plays in that.”

New Canaan Chamber of Commerce Executive Director Tucker Murphy said she was “thrilled” to see a commercial space occupied that had been vacant for some time.

“And certainly it seems that we have a focus these days on healthy eating and living and it being Breast Cancer Awareness Month, this feels like good timing, given what I understand Green & Tonic is all about,” Murphy said.

New Canaan’s Cobie Graber, head of Nourish New Canaan—an organization focused on improving the community’s health—and founder of the New Canaan Public Schools’ wellness committee, said she’s excited “that in general the quality of ingredients and food is improving in our town.”

Citing businesses such as The Farmer’s Table, Locali, Baldanza, Rosie, Walter Stewart’s, Mrs. Green’s, Oxygen, CT Sandwich Co. and New Canaan Healthfare, Graber said that “to the extent of having more healthy food options in town, the more the merrier.”

“I think it reflects a change in focus and I think it is refreshing to see more of our residents and people who work here willing to invest in their health,” she said.

For Pandolfino, Green & Tonic may become an option for New Canaanites whose doctors are advising them that they need a more plant-based diet.

Asked about the company’s intentions as far as supporting community events and causes, such as through partnerships, fundraisers or involvement in local organizations, Pandolfino said Green & Tonic looked forward to joining the chamber and connecting with likeminded people.

Pandolfino said he wants to connect with “organizations that are doing good, that’s kind of what we are all about.”

“Whether that’s yoga studios or aquatic studios or local health coaches and gyms, we’re looking for truly local people to align with,” he said. “We do a lot in Greenwich and Darien with health fairs and school and community wellness days.”

“We want to be a champion of the cause, that’s how we see it. We want to help you win and be better.”