Baskin-Robbins, a mainstay of downtown New Canaan for more than a half-century, will close Dec. 28, its owner said. 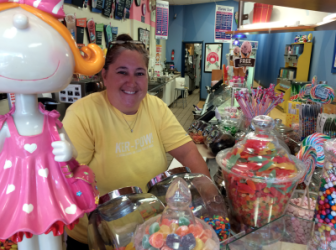 A lease renewal on the Main Street commercial space has triggered a franchise agreement-required remodel that’s cost-prohibitive, according to Anna Valente-Krolikowski, owner of the popular ice cream shop since 1992.

It’s a bittersweet moment for the town native, who said she’s looking forward to retiring (“I’m hanging up the scoop”) and starting a new chapter, though she’s “loved” forging lifelong relationships with workers and customers at Baskin-Robbins.

“Listen, am I excited because I think I need a break? I do,” she told NewCanaanite.com. “I am excited to do something new. I need a change. We all need changes. Am I sad that I am not going to be giving ice cream to little kids? Yes. But I know somebody new will come in here. You never know what the spring will bloom.” 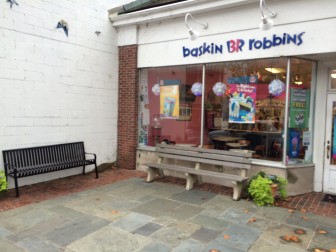 (Reached for comment, the commercial property’s owner said that though no formal announcement can be made, new ice cream providers have shown strong interest in the space.)

Valente-Krolikowski said she’d gone to work in corporate America immediately after graduating from New Canaan High School in 1987 but grew frustrated there.

“I didn’t go to college so my mom said to me, ‘You wanna go to college or go to work?’ That’s what she said to me, wagging her little finger in my face,” Valente-Krolikowski recalled. “So we bought the store. That was my college. I thought five, six years. It’s 28 years later. I’ve seen kids born, married, have their own kids.”

Valente-Krolikowski herself has become a beloved local business owner-on-site here, hosing down and scrubbing the sidewalk out front of the Main Street ice cream shop each morning, employing dozens of New Canaan teens through the years, scooping ice cream at community events, donating tubs and time to local causes and hosting the annual fundraiser night for the Mikey Czech Foundation, named for a local boy who died in 2008 at age 11 of an aggressive and inoperable brain tumor.

His dad, Steve Czech, recalled that at the time, Valente-Krolikowski and her team quietly packed up a van each week and, for months, traveled to New York University Medical Center to give ice cream to Mikey and other kids undergoing treatment.

“She’s an extraordinary human being,” Czech said. “I cannot tell you how much she made those kids’ days, going through what they were going through. And that is just a fraction of what she does, a microcosm of what she has done for this community. I’ve heard of many other things she has done to help people out, never asking for anything—in fact, refusing compensation when it’s offered.”

“She will be sorely missed and quite frankly, the town will not be the same without her and Baskin-Robbins,” he said. “She’s one of those human beings that comes along increasingly infrequently these days. She’s an old soul, a wonderful person.”

New Canaan resident Sean Lytle has been getting a Cappuccino Blast at Baskin-Robbins every day for years.

“I don’t drink coffee, so it’s my way of getting caffeine and I like milkshakes,” he said.

Asked for his thoughts on Valente-Krolikowski’s imminent retirement and the closing of Baskin-Robbins, Lytle said, “I’m very upset to hear that but it’s totally understandable, with the years and dedication she has provided to the town as well as Baskin-Robbins. I love Anna, I love her whole crew, everyone there is always so nice. She’s cheerful and she knows everyone.”

Valente-Krolikowski is as well-known for her work ethic as her generosity. Her three children each were born on a Tuesday during the years she’s owned the ice cream shop, and Valente-Krolikowski in each case returned to work on Thursday of the same week. Valente-Krolikowski herself hasn’t been able to just stay home on a Saturday or Sunday morning in nearly three decades, and the New Canaan location has become Baskin-Robbins’s busiest store on the Eastern seaboard, she said.

Hal Siegel said he and his wife, Linda, have been regular customers for years.

“My wife and I, we love ice cream,” Hal Siegel said.

He noted that Valente-Krolikowski has “provided a source of employment for tons of these high school kids that would not have found any job were it not for Anna.”

“It’s heartbreaking that the store won’t continue to be there,” Hal Siegel said. “She is just such a pillar in the community. I can’t imagine New Canaan without Anna and Baskin-Robbins. We are devastated. Let me just say, she was a softie. She gave these kids jobs. There are plenty of times I would see two kids in the store and there wasn’t any business, and I knew that she wanted to help the kids with their first job. People would come into the store, you could see they couldn’t afford anything. She would comp them the ice cream. She’s just a wonderful, sweet person.”

Linda Siegel said she’s been going to Baskin-Robbins since it was located on Elm Street, and recalled rare times that she’d go to Baskin-Robbins on her own because her husband was unwell and Valente-Krolikowski would ask after him.

“She would get his favorite ice cream and give me the rest of the vat,” Linda Siegel said. “She wouldn’t let me pay for it. Once she gave me whipped cream to take home to him because she knows he likes whipped cream. Her ice cream was good, too. So we are so sorry to lose her. She was a friend to us, to everybody in town.”

It hasn’t always been a smooth ride for Valente-Krolikowski, who purchased the 1968-launched New Canaan business from prior owner Steve Tyminski, and moved it in 2002 to Main Street. Three years ago, Valente-Krolikowski considered eliminating her buy-one-get-one free or ‘BOGO’ Tuesday promotion after a New Canaan woman threw an ice cream sundae behind the counter and berated workers, yelling that the ice cream had melted by the time her husband brought it home. (The popular promotion survived the “sundae slinger.”)

Valente-Krolikowski said owning and working daily at Baskin-Robbins has brought her close to much of the community.

“We are like psychiatrists here when they come in, we talk to them,” she said.

Asked what has sustained her in the job, Valente-Krolikowski said, “I don’t know. I like the people. I love doing what I do. I like selling people ice cream. It’s a happy place. People come through the door and you see the big smiles on their faces. I love them. It makes me cry.”