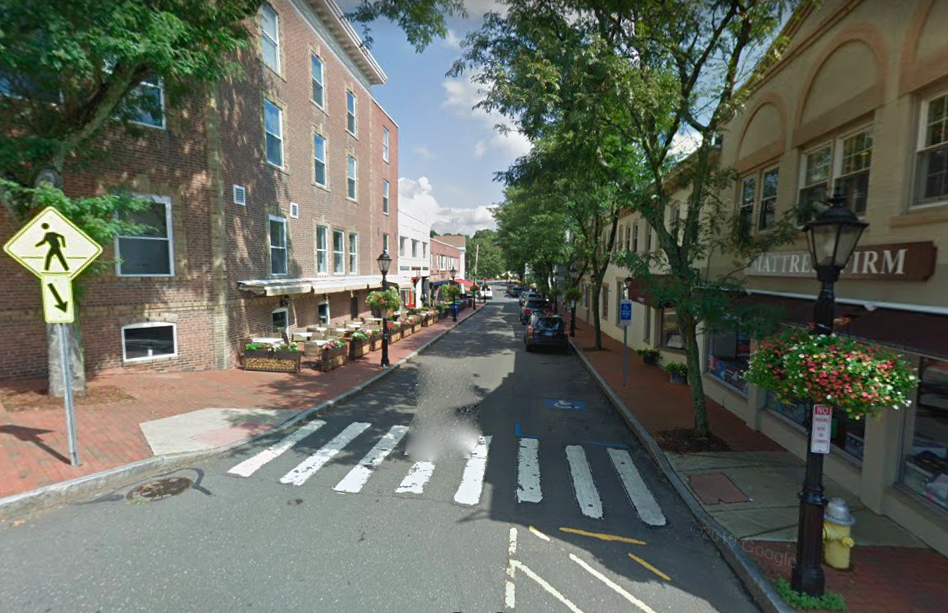 The Parking Commission this month voted 3-2 to uphold a $30 ticket that had been issued to a New Canaan woman who parked in a loading zone on Forest Street.

Denise Luccarelli told members of the appointed body at her appeal hearing that she “had all of Forest Street to park on” when she went to breakfast at New Canaan Diner with a friend on the morning of Aug. 19 (a Monday).

“And everyone knows where the handicapped spot is, so I knew if I parked two or three car lengths away from the handicapped spot, I would be good,” Luccarelli said during the hearing, held Sept. 4 at Town Hall. “That was my mindset. I come out maybe an hour, hour-and-a-half later … and your parking officer is in the process of writing me a ticket, and I am stunned.”

Luccarelli said that the signage on the street is confusing, that the street itself had no striping that lined out parking spots, and that when she went to Town Hall to protest the ticket that the municipal worker she spoke to was “not very nice and doesn’t embody the personality of New Canaan residents.”

After questioning how the Parking Bureau worker got the job at Town Hall, Luccarelli said she was told “to park in between the arrows,” changing her voice for the word ‘arrows’ in what appeared to be an imitation of an accent.

“I didn’t see the second sign up in the trees,” Luccarelli said. “But this you all know because every person I have mentioned this ticket has received the same ticket.”

Luccarelli called for the signage to be improved, adding, “And furthermore, I own two asphalt plants, and the street should be lined. There’s no spaces for cars to park in. That is another thing.”

Crum said that Lucarelli has lived in town for many years and has parked on Forest before.

“She should be aware that these are normally marked,” Crum said.

Parking Manager Stacy Miltenberg noted that the street had recently been repaved, though a sign instructing motorists that the area is a designated loading zone from 7 to 11 a.m. has remained in place.

Noting that the town appeared to solve a problem of motorists parking in a disabled space on Elm Street by painting the street in addition to signage, Hering called for some type of street marking for the loading zone and voted to void.

During the appeal hearing, Luccarelli said she normally pays her $30 tickets “because I really just don’t choose to be agitated and complain and protest.”

“Typically I pay them, like the time when I got a ticket outside of Starbucks waiting for my daughter to pick up a drink, and there were no spots outside,” she said.

Richey said that Luccarelli can only appeal one ticket at a time.

She responded that she wasn’t appealing the earlier ticket.

Luccarelli added, “And I must tell you, too, Mr. Commissioner, I am living here 17 years. I own my home, I actually recently built a new one and I have to tell you, I really don’t like the way the town is going. It’s becoming a tax-and-fee town.”

Richey said the Commission was only there to discuss parking tickets.