One rendering for preserving the home at 9 Colonial Court. Sketch by Mark Markiewicz

The owner of a Colonial Court home that’s slated for demolition is reviewing alternatives brought forward by a town committee that encourages preservation of significant local buildings, according to her daughter. 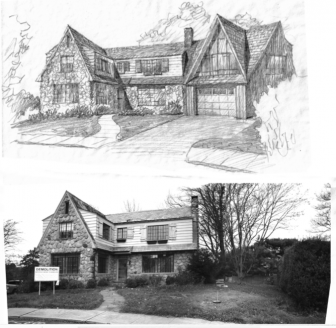 Another rendering for preserving the home at 9 Colonial Court. Sketch by Mark Markiewicz

Michelle Cardone, whose elderly mother Sandra owns the 1933-built home at 9 Colonial Court and now requires single-floor living, said when asked about plans for the house, “We also have a new architect reviewing all the plans as well as our specific needs to determine whether there is any way to save any part of the existing house and incorporate it into our plans.”

“He has experience with older homes,” Michelle Cardone told NewCanaanite.com in an email. “The Historical Review Committee and all our neighbors have also been made aware of this status.”

Michelle Cardone is expected to attend a meeting of the Committee at 9 a.m. Thursday.

Members of the Committee started talks with the Cardones after the application to demolish the house was filed Oct. 21 with the New Canaan Building Department. 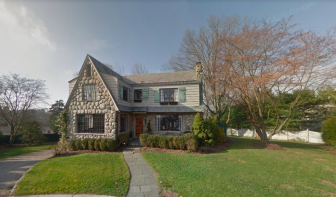 The Committee on Nov. 12 imposed a 90-day delay on the demolition of the house, as is allowed by local ordinance. The delay lifted Jan. 19., and though a demo permit has not yet been issued, town officials say the homeowner now can move forward to obtain the necessary prerequisites for it.

The Committee’s chair, Mark Markiewicz, an architect, submitted conceptual sketches to the Cardones. They show two versions of an expanded house at 9 Colonial Court, both preserving the original 1933 structure. Included as an addendum to Thursday’s meeting agenda, the sketches show an addition on the north side of the house, one running flush with the existing structure and the other offset at an angle.

Cardone has said at past Committee hearings that her mother has spent significant funds consulting with architects on the prospect of creating the required space inside the existing house.

Several neighbors have spoken out in favor of preservation, in letters to town officials and at the November hearing, saying the home is unique, architecturally significant and important to the neighborhood.