The New Canaan Food Pantry up at St. Mark’s receives non-perishables from private residents dropping off needed items, organizations and special events such as the Chamber of Commerce Taste of the Town Stroll and, more recently, the Waveny installment of Caffeine & Carburetors. 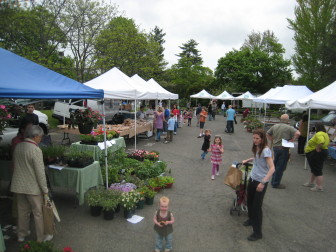 The people who run the pantry say that for the past two years and especially over the past several weeks, there’s been no shortage of nourishing fresh produce, thanks to the generous efforts of Lexi Gazy, a co-founder of the popular New Canaan Farmers Market.

Carol Harvey, one of the dedicated volunteers at the pantry, said Gazy raised her hand to help out and gathers up excess produce from the farmers market: corn, lettuces, carrots, beets, radishes, sweet potatoes, herbs.

“It’s fresh produce, it’s great and the clients—the people that come and get food—are thrilled with it,” Harvey said. “You know, it makes a big difference when you’re getting fresh vegetables.” 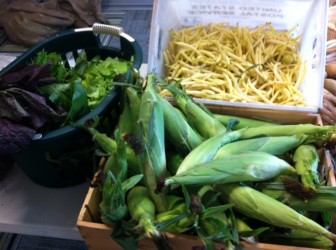 Harvey added: “They [farmers market vendors] are so sweet and they are wiling to help us all the way through Thanksgiving. [Lexi] has been fabulous.”

The pantry has its distribution day every other Tuesday, and Gazy arranges for a donation to coincide with them (and she also accepts non-perishables from visitors to the market, for the food pantry). Asked about what prompted her to take the extra time and effort to do it, Gazy, of Oxford-based Gazy Brothers Farm, said: “It’s just another way to give back to the community.”

“We feed all people and we always produce more than we can sell. And I just think in times of difficulty, it’s nice to have a fresh bowl of soup or something to keep your spirits up.” 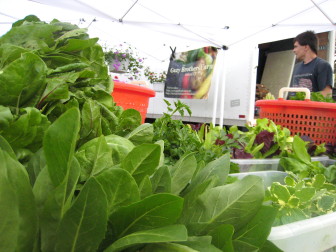 Gazy’s good will also extends to the New Canaan ABC House, where New Canaan’s Beth Jones has served as cook for six years.

On the off-weeks for the food pantry, Gazy extends an offer to get Jones whatever she needs to feed the growing boys over on Locust Avenue.

“Boys are hungry and she feeds so many boys,” Gazy said with a laugh.

Jones—who includes two vegetables and a salad with every meal—said Tuesday night that she’d cooked corn on the cob from the farmers market for the previous night and had just come from a dinner table with “beautiful cauliflower” from Gazy.